The Peerless Prognosticator is ON THE AIR!!! -- Game 25: Capitals at Hurricanes, December 4th

The Washington Capitals take their act to the road for the next three games, starting with a visit to Raleigh, NC, and the Carolina Hurricanes.  The Caps and ‘Canes, long-time adversaries fighting over a Southeast Division championship, are now locked in a battle to remain relevant in the Metropolitan Division race.

Washington, losers of two straight and four of their last five games (1-3-1) are at least hanging close to a playoff spot, just two points behind the New York Rangers for the third spot in the Metro (the Caps are five points behind the fifth-place team in the Atlantic and the at-large playoff spot).  Carolina has a tougher row to hoe.  The Hurricanes are seven points behind the Rangers and struggling to remain afloat.  After winning four straight games to start the month of November, they lost to the Caps on November 8th by a 4-3 margin in overtime.  Starting with that game, the Hurricanes are 4-7-1 in their last 12 contests.

Part of Carolina’s recent problem is an awful record in one-goal games.  They are 1-5-1 in such games in this 12-game slide, breaking a string of six straight one goal losses with a 2-1 win over Nashville last Tuesday.  Add in the fact that Carolina lost two of three games in which an empty net goal was scored to provide a two-goal margin, and the Hurricanes played their games on the margin 10 times in 12 contests with a 2-7-1 record.

One thing contributing to the Hurricanes’ recent woes is being underwater at even-strength.  Outscored overall in their last 12 games by a 29-28 margin, they have been outscored 25-19 over those games.  It has negated a respectable special teams performance in which they were 9-for-34 on the power play (26.5 percent) and 21 for 24 killing penalties (87.5 percent).

Staal and Skinner seem to be hitting their stride after suffering injuries earlier this season.  Staal missed five games in October to an upper-body injury, but he is 5-8-13 in 17 games since returning.  Skinner missed the first four games of the season after sustaining a concussion in the preseason finale against the Capitals when he collided with defenseman Matt Niskanen. After his late start, he is 6-7-13 in 20 games.  Staal is 25-42-67 in 65 career games against Washington, while Skinner is 7-11-18 in 22 career games against Washington. 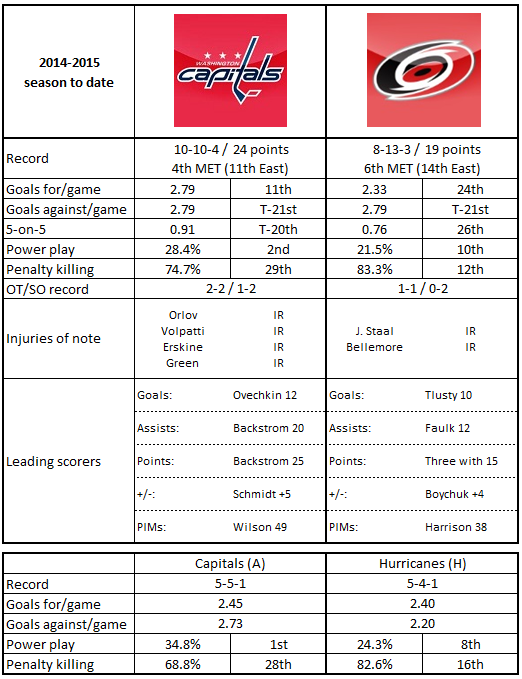 1.  Carolina just does not score much at 5-on-5.  With 37 goals they are 27th in the league in scoring at 5-on-5.  Only Buffalo, Columbus, and Winnipeg have scored fewer.

3.  One thing Carolina is not guilty of is coloring outside the lines.  Their 73 minor penalties is tied for lowest in the league (Nashville), and their average of 7.1 penalty minutes per game is a league low.  Only Nashville (64) and Calgary (65) have found themselves shorthanded less often than Carolina (66), and no team has been shorthanded less frequently than the Hurricanes at home (23 times in ten games).  They play within the rules, or they are very adept at concealing their infractions.

4.  Carolina has not had much in the way of offensive fireworks this season.  Only Winnipeg has had fewer games (3) with four or more goals scored than Carolina (4).

2.  Alex Ovechkin has goals in eight games this season, and the Caps have a record of 5-1-2...they are 5-9-2 when he does not have a goal.  Either he needs to score more, or the Caps need to find reliable secondary scoring from somewhere…anywhere.

3.  Tales of a Rookie… In his first 15 games this season Andre Burakovsky was 3-9-12, plus-5, while averaging almost 14 minutes a game.  In his last nine contests he is 1-0-1, minus-4 and averaging 12 minutes and change a night in ice time.  In three of his last four games he skated less than ten minutes.

4.  John Carlson has grabbed a spot among the league defenseman scoring leaders with a recent rush.  Carlson has point in three straight games (2-4-6) to climb to a tie for sixth place in points among defensemen (4-14-18).  It is the first time he recorded points in three consecutive games since going 1-3-4 from January 30th through February 2nd last season.  It is the most points he has had over a three-game stretch since going 1-6-7 from December 5-9 in the 2011-2012 season, part of a four-game scoring streak (1-7-8).

5.  Consider the following… The Capitals have 16 third period goals all season.  Only Winnipeg and Columbus have fewer.  They are 0-6-1 when trailing after two periods.  Only teams with no standings points trailing after 40 minutes are: Columbus, Tampa Bay, Arizona, and Buffalo.  They are 1-9-3 when allowing the game’s first goal.  Only Buffalo and Columbus have a worse winning percentage when scored upon first, and no team has fewer wins.  So far, this is not the profile of a team strong through 60 minutes of play on a regular basis.

When Nicklas Backstrom assisted on John Carlson’s goal 2:45 into the Caps’ 4-3 loss to Vancouver on Tuesday night, it made it six straight games with a point for Backstrom (1-8-9).  It is his longest points string since putting together a nine-game streak from March 30th through April 13th in the 2012-2013 season.  It is not, so the narrative goes, that he has been padding his assist totals by setting up Alex Ovechkin.  It is true that four of Backstrom’s eight assists in this six-game streak have come on Ovechkin goals, but three of those assists are of the secondary variety.  He has four other assists, all primary helpers, setting up Matt Niskanen, Troy Brouwer, Tom Wilson, and Carlson.  The thing is, though, four of those eight assists came on power plays.  It would be nice if Backstrom, or anyone, could lift that total at even strength.  Backstrom is 12-34-46 in 38 career games against Carolina.

This game will mark the 25-game point of the season for the Caps.  If you look at their five-game win-loss blocks so far, they look like this:
One might have expected some clearer sense of improvement over time from a team led by a new coaching regime.  It has not yet happened.  And, the Caps have had a disturbing inconsistency in their possession numbers at 5-on-5 recently.  Since they beat Carolina, 4-3 in overtime on November 8th, the Caps are 4-5-1 with overall possession numbers every bit as muddled.  In those ten games the Caps have a Corsi-for percentage of 51.03 (numbers from war-on-ice.com).  However, the range of numbers is from a low of 40.0 in the Caps’ 3-2 overtime loss to the New York Islanders on November 26th to a high of 63.21 in a 2-1 loss to the Buffalo Sabres on November 22nd.  In those ten games the Caps were over 50 percent in five games, below 50 percent in another five contests.  Call it a consistent inconsistency.  Call it something that has to change.  If it starts to, this would be an opponent against which you might expect it to happen.