Last October, we took note of something Wojtek Wolski said upon his signing with the Washington Capitals as a free agent…


"I still have a lot of life left in me.  I'm at a point in my career where I'm at a crossroads, and I've got to make it work."

What we did not do was finish the quote.  Here is the entire quote…


“I still have a lot of life left in me. I’m at a point in my career where I’m at a crossroads and I’ve got to make it work and I think I’m ready and able. It’s going to be a great year.”

Wolski might have been ready; he played briefly with KH Sanok in the Polish Hockey Superleague during The Great Lockout of 2012-2013.  He might have been able; after all, he did record 95 goals and 257 points in 424 games in a seven-year NHL career.  However, it was not a great year.

It is a bit of a mystery how Wolski came to be a healthy scratch more often as the season wore on.  Among Caps forwards appearing in at least 20 games he had the best raw Corsi value at 5-on-5, and he was third in Corsi value on-ice relative to the value off-ice (numbers from behindthenet.ca).  From that perspective his possession numbers were certainly adequate.

His goals scored per 60 minutes at 5-on-5 were middle of the pack among those Caps forwards, as were his primary assists.  His scoring did not appear to be an obvious problem.

But there were numbers that jumped out.  The team save percentage with Wolski on ice was second worst among Caps forwards, contributing to his team-worst PDO value among forwards at 5-on-5.  His team goals-against per 60 minutes at 5-on-5 was ninth among forwards (numbers from behindthenet.ca).  He did not suffer a large volume of total goals scored against (12th among all forwards), but his 12 team goals scored against in 27 games was not much different from the 14 goals scored against with Mathieu Perreault on ice.  The difference was that Perreault realized that total in 39 games and almost 100 more minutes of total ice time than Wolski. 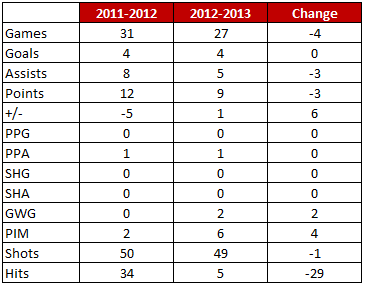 Odd Wolski Statistic…  “Three.”  Wolski spent three seconds this season on the penalty kill.  Not three seconds per game… three seconds, total.  It was the lowest such number on the team among all 28 skaters who dressed for the Caps.

Game to Remember… March 7th vs. Florida.  The March 7th contest against the Florida Panthers was more or less Wolski’s season.  His goal at 3:10 of the first period giving the Caps a 2-0 lead would prove to be the game-winning goal.  He did a fine job of walking around defenseman Colby Robak at the goal line, collecting the puck off the skirt of the net and stuffing it under goalie Jacob Markstrom.  That being the second goal of the evening on the Caps’ first two shots, Markstrom’s evening was over.  Wolski’s evening was just beginning.  He assisted on a power play goal by Eric Fehr, a sweet pass through the crease to Fehr in the left wing circle setting up the score.  Then he put the cherry on the sundae, setting up Mathieu Perreault with a little spin-o-rama pass at the Florida blue line to spring Perreault in on relief goalie Scott Clemmensen to end the night’s scoring in a 7-1 Caps win.  Wolski finished with a third of his point total for the season, going 1-2-3, plus-2, in 12:15 in ice time.

Game to Forget… April 9th at Montreal.  In what would be his penultimate game as a Capital, Wolski skated only eight shifts in Bell Centre (his lowest total of the season), only one of those in the third period of what would be 3-2 win for the Caps.  No goals, no assists, no points, no shots.

Post Season… Wolski did not dress for any of the seven games in the opening round series against the New York Rangers.

Wolski’s tenure with the Caps is already past tense.  On May 20th – one week after the Caps were eliminated from the playoffs – Wolski came to terms on an agreement with Torpedo Nizhny Novgorod of Russia's Kontinental Hockey League.  His was a low risk signing, probably worth it even in retrospect to see if he could recapture the sort of 50-point production he enjoyed in his rookie season.  Truth be told, his scoring line on an 82-game basis (12-15-27) was not far off the prognosto for him last October (15-19-34).  But he just could not find a niche in the lineup and did not do enough to instill confidence in his production on a consistent basis.  What it means is that it is entirely possible that Washington was the end of the line for Wolski in the NHL at the too-soon age of 27.

Posted by The Peerless at 7:47 PM No comments: