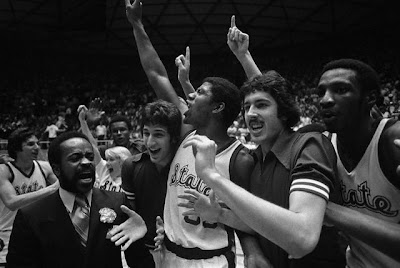 Thirty years ago this evening, sports fans were given a present that keeps on giving. A team led by a blue collar son of mid-Michigan led his basketball team against a rural-bred son of Indiana in, of all places, Salt Lake City, Utah, in what would be the most anticipated one-on-one matchup in college basketball that season – perhaps any season – and what would become the most watched matchup in the history of the sport.

As Michael Wilbon points out in this morning’s Washington Post, most people watching Michigan State play Indiana State for the championship of Division I men’s college basketball had never seen either Earvin “Magic” Johnson or Larry Bird play on live television.

Well, I did. In fact, from the time I saw Magic Johnson play his first game at Michigan State (an aesthetic disaster, by the way; none of his teammates seemed to appreciate the ways he could get them the basketball and ended up receiving most of his passes in the side of the head) until this national championship game, I saw just about every one of his home games at Jenison Field House in person.

I was a contemporary of Johnson at MSU in those years. I was one of those students whose clocks stopped on a spring morning in Johnson’s senior year at Lansing Everett High School when he was to make his long-awaited announcement as to whether he would attend Michigan State or Michigan. I can remember the feeling of the campus exploding when Johnson announced he would be staying home, so to speak, to enroll at State.

In that first year Johnson played for the Spartans, his teammates finally figured out that they had better be paying attention whenever they were near the basket, because Johnson would find them. They figured it out well enough to make it all the way to the Elite-8 in the NCAA tournament, falling to eventual national champion Kentucky in the Mideast Regional finals. No one in East Lansing who followed the team could wait for the next year.

And I’ll bet few of those folks knew anything about Larry Bird other that he was something of a curiosity. He was the guy the Boston Celtics drafted when Bird still had a year of eligibility left, rolling the dice that he might declare for the NBA draft under what was then referred to as the “junior eligible” rule, or if he didn’t that they could sign him before the next year’s college draft. Guess he must be pretty good.

Bird stayed at Indiana State, and as he embarked on his senior year and Johnson on his sophomore year, they would end up taking very different paths to that night 30 years ago. Bird’s Sycamores rolled through their schedule undefeated, putting up 33 wins in a row leading up to their meeting with MSU in Salt Lake (“33” was also the jersey number of Magic Johnson in one of those odd ironies one finds in sports).

Johnson’s Spartans, meanwhile, took a more meandering path to Salt Lake. They very nearly didn’t qualify for the NCAA tournament, in fact. There was no Big Ten conference tournament in those days, so you had to win the regular season title to gain an automatic bid. And since there were only 40 teams in the tournament in those days, at-large bids were hard to come by. State stumbled out of the gate in the conference portion of the season, splitting their first eight conference games. Their season almost ended in their ninth conference game, but they managed to beat Ohio State in overtime, after which they rolled off another nine straight wins to clinch the Big Ten title.

As the tournament began, Indiana State was selected as the top-seed in the Midwest Region and for the tournament. MSU, having lost its regular season finale to Wisconsin, was a number-two seed in the Mideast behind Notre Dame. And here, it was Indiana State’s turn to struggle. After winning their first two games handily over Virginia Tech and Oklahoma, they were nearly knocked off by Arkansas in the regional final before surviving with a 73-71 win. MSU, on the other hand, rolled through the Mideast, winning three games by double digits and an average of 20 points.

In the national semifinals Indiana State struggled once more, edging DePaul, 76-74. On the other side of the Final Four, MSU ended the competitive portion of the game early, racing to a 50-17 halftime lead over Penn before winning 101-67. That set up the matchup everyone was anticipating.

While MSU had the national reputation of what would later become with the Los Angeles Lakers, “showtime” – Magic Johnson leading fast breaks and lobbing passes to Greg Kelser for dunks – folks who saw a lot of MSU knew about the suffocating 2-3 matchup zone that they played exclusively on defense. Only five times in 23 games in the new year did MSU allow as many as 70 points in a game leading up to the championship. If any team was constructed to defend Larry Bird – the college player of the year – MSU was probably that team.

I don’t have first hand knowledge of it, but I’d wager that you couldn’t find five people walking on the sprawling campus of Michigan State on that Monday evening 30 years ago. Everyone was crammed around television sets in dorm rooms, bars, and homes for the Johnson-Bird, State-versus-State matchup. I was living off-campus at the time and was huddled around the TV with my housemates to watch and listen to Dick Enberg, Billy Packer, and Al McGuire call the game.

I can’t say that I remember a lot about the game, start to finish, only flashes of it…Larry Bird can’t get a shot off… Kelser’s in foul trouble… someone needs to defend Carl Nicks… Kelser’s fourth foul… they’re letting Indiana State hang around too long… Bird has to get hot sometime… when did Terry Donnelly get a jump shot?... Donnelly, again?... again??... another???... Johnson’s taking over… Johnson dunks and is fouled… no look homerun pass to Kelser… slam… we’re champs!

All of us in the house decided we were going to head into town – “town” being a half mile down Michigan Avenue – to celebrate. We were hardly alone. East Lansing was one big traffic jam as folks poured out of houses, dorms, and apartments to celebrate the win. I can remember hanging out of the car screaming myself hoarse joining in with a “Go Green, Go White” cheer that seemed to roll across the campus. We inched our way toward East Lansing’s “main street” – Grand River Avenue – and took what seemed like about an hour to get there. The rest of the night (and much of the following morning) was a blur, except I think we ended up at a place called “Lizard’s Underground.” It hardly mattered.

We – all of us in the Michigan State University community – were champs.

I can remember vaguely the parade that was held for the team in Lansing, but like everything else from that time and that basketball season, it all runs together -- the expectations surrounding the team early based on the previous year's success, the unexpected losses to inferior teams that almost ended the season prematurely, the steamrolling of opponents in the early rounds of the tournament, the beating of hated Notre Dame in the regional final (Kelly Tripucka was that generation's Sidney Crosby to Spartan fans), Penn not knowing what hit them in the national semi-final, the anxiety over facing an undefeated team with the player of the year in the finals, the exhilaration when the final horn sounded, the celebrations afterward. It still brings back a glow thinking about it, and it has relevance to hockey here and now.

Before Magic Johnson and Larry Bird, March was just the third month in the rolling year. Those two gave us “Madness.” Here and now, June is just the first month of what is usually a lazy time of year in Washington – folks planning beach trips and government going on holiday. For hockey fans it’s meant looking at amateur players and waiting for the draft at the end of the month.

This year, though, there is a sense of anticipation – and uncertainty, to be sure – about just what these Capitals are capable of. They are talented, they are capable of great things, and there is more expected of them than in years past. They have a precocious youngster and an underrated supporting cast. It reminds me a little of a basketball team from 30 years ago. And just as that basketball team helped turned March “mad,” this team can turn June “joyful” for a generation of Caps fans who have never known the thrill.

A thrill you’ll remember thirty years from now.
Posted by The Peerless at 7:27 AM No comments: