Washington Capitals: And Now, For Something a Little Less Serious...Uniforms 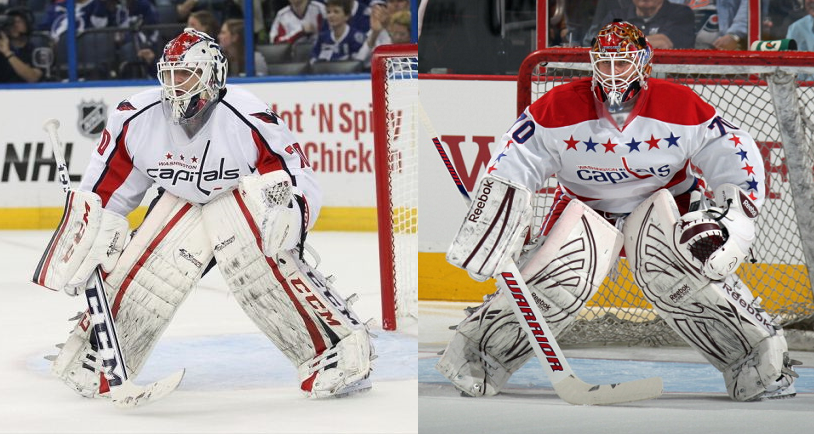 The Washington Capitals introduced their throwback white jerseys in the NHL Bridgestone Winter Classic on New Year’s Night 2011 in Pittsburgh.  It was a rousing success, the Caps defeating the Penguins, 3-1, on a rainy Heinz Field rink.

Three years later, the bloom is off the rose, so to speak.  The Capitals, who have sought for some level of consistent winning performance for much of this season, certainly have not found it wearing the white echoes of the 1970’s and 1980’s.  Here is their record when wearing their throwbacks:


A 4-7-2 record, including last night’s loss in Boston, is not one that Caps fans might have hoped for in the alternate duds.  “Duds” might have more than one meaning in this context.

You could say that since these are exclusively road uniforms (visiting teams wearing white in NHL games), and that the Caps are, like many NHL teams, not as good a team on the road as they are at home, that the Caps should not be expected to have a great record when donning the third jersey.

The thing is, though, while the Caps have that 4-7-2 record in the alternates, they are a respectable 8-8-3 in road games wearing their standard issue jersey.  It has to be the jersey.  Let us delve a bit deeper into the differences…

But oh, that defense and goaltending.  The Caps allow more than half a goal a game more in the alternate roads (3.38) than they do in the standard issue whites (2.84), and this is reflected in poor penalty killing numbers in the throwbacks (76.9 percent versus 87.3 percent in the standard jerseys) and awful goaltending numbers, a GAA difference of two-thirds of a goal per 60 minutes and a save percentage difference of almost 20 points.  Of the seven times that the Caps allowed five or more goals in road games this season, four of them have come wearing the alternates despite only 13 of 32 road games played in those jerseys.

Consider this as the remainder of the alternate jersey schedule comes up:

Looking at their road performance so far this season in their different ensembles, it might be true that “clothes make the man,” but when it comes to throwbacks… throw ‘em back.  They’re not helping.

It is said that the best defense is a good offense.  No, the best defense is when an offense doesn’t show up.  That was the case for the Washington Capitals last night, who left their offense at the hotel in Boston, losing to the Bruins, 3-0, at TD Center.

In a rematch of last Saturday’s contest on the same rink, the Caps could not replicate their start in that game, finding themselves incapable of mounting any consistent pressure.  Boston, on the other hand, was pounding the Caps net and goalie Braden Holtby with shots, and the pressure eventually yielded results in the second period.  With the Bruins skating with an extra attacker on a delayed penalty call, Gregory Campbell redirected a Patrice Bergeron one-timer past Holtby at the 3:05 mark from the top of the crease to Holtby’s right.

Five minutes later Loui Eriksson scored from the same spot of the ice when Carl Soderberg circled behind the Caps net and found Eriksson camped out at the edge of the crease.  Eric Fehr could not tie up Eriksson, and the Boston forward roofed the puck over Holtby’s blocker for a 2-0 lead.

That was more than enough, but the Bruins added an empty net goal by Brad Marchand with 34 seconds left for the final margin, sending the Caps home with their third straight loss.

-- The delayed penalty awaiting the Caps that was wiped out by the Campbell goal was the only infraction called in the game.  Neither team served a penalty.

-- The win was Tuukka Rask’s first career victory against the Capitals.  We was 0-3-3 in six career decisions before last night.

-- Alex Ovechkin had one shot on goal for the game.  That is a season low for him and is his lowest shot total since he was held without a shot on goal against the Carolina Hurricanes in a 4-0 loss on March 12th of last season.  No Capital had more than two shots on goal; Troy Brouwer led in attempts with four.  The top line of Dustin Penner, Nicklas Backstrom, and Alex Ovechkin (although there was a fair amount of scrambling going on) had a total of two shots on goal (Penner, Ovechkin) and five shot attempts (Ovechkin: 3, Penner: 2).

-- Time management apparently played a role in this game, it being the second of a back-to-back (the Caps lost on Wednesday night in Philadelphia).  Only Jack Hillen (23:27) and Mike Green (25:41) played more than 20 minutes of all the skaters dressing for this game.  Only Marcus Johansson (18:43) skated more than 17 minutes among the forwards.

-- Scrambled eggs… The Caps started the game with a forward line of Chris Brown, Eric Fehr, and Joel Ward.  Ninety seconds later the defensive pair taking the ice was Connor Carrick and Cameron Schilling.  Thirty seconds after that the line to take the ice was Marcus Johansson, Dustin Penner, and Troy Brouwer.  The next line was Ryan Stoa, Jay Beagle, and Joel Ward.  Less than three minutes into the game the Caps had Brown and Schiling skating their first shift for the Caps this season, while for Stoa and Penner it was for each their second game in a Caps uniform this season.

-- The 42 shots faced by Braden Holtby was the fifth time this season he has seen at least 40 shots on goal.  This total was exceeded twice – 47 shots in a Gimmick 5-4 win over Winnipeg on October 22nd, and 47 shots in a 4-1 win over St. Louis on November 17th. Holtby is 2-3-0 in games this season in which he faced 40 or more shots, the losses (in addition to last night’s) coming against Pittsburgh and Ottawa.

The Bruins did everything last night that they did not do against the Caps last Saturday.  They played stifling defense, clogged the middle, won battles, didn’t take penalties, and ground the Caps down.  Not that the Caps offered a lot of resistance.  Their second back-to-back in a week might have had something to do with it, just as the addition of new faces might have caused moments of discombobulation.

Whatever the reason, it is three losses in a row for the Caps precisely when they can least afford an extended losing streak.  It does not get easier.  Washington will now play three games in four nights, a home tilt against Phoenix on Saturday followed by a home-and-home back-to-back against Pittsburgh on Monday and Tuesday.

You can now say this is it.  These next four days are the Caps’ season.  Either they will find a way to incorporate the new parts quickly and get more production and effort from the other players, or they will, well, have nights like last night and see what is left of their season melt away like last week’s snow, and just as rapidly.