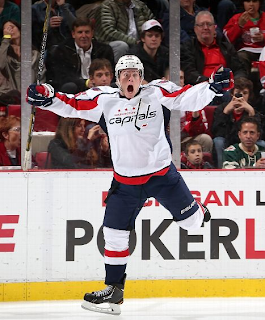 “You have to think about one shot. One shot is what it's all about. A deer's gotta be taken with one shot.  I try to tell people that - they don't listen.”

Michael Vronsky might have been talking about taking down a deer in “The Deer Hunter,” but one shot – one shot – was what it took for the Washington Capitals to take down the Detroit Red Wings last night, 4-3, in a trick shot competition.

What led up to that one shot was, to say the least, interesting.  It was Washington drawing early blood when Steve Oleksy stifled a pass from Danny DeKeyser to Justin Abdelkader at the Capitals’ blue line.  Oleksy bumped the puck up to Brooks Laich at the Detroit blue line.  Laich turned and carved a path through the right wing circle, then snapped a forehand off the winged wheel logo on goalie Jimmy Howard’s chest.  The puck popped up and dropped to the ice, teed up for Laich to chip a backhand from a severe angle into the net at 5:50, leaving Howard with nothing to do but go to the water bottle and think about the rebound he left.

Almost exactly ten minutes later Johan Franzen tied the game on a power play when he surveyed the situation from the left point, inched down the boards, saw that no Capital was coming out to challenge him, circled into the left wing circle, and snapped a shot through a screen, over goalie Braden Holtby’s right shoulder, off the pipe, and in.  Nothing but nothing but net…but it counted.

Less than three minutes later, with the clock under two minutes remaining in the period, it was Franzen again (we should never have pondered him in the prognosto), first watching as Tomas Tatar danced with the puck behind the Caps’ net, then sliding to his left as Tatar came out to Holtby’s left, finally taking a cross-crease feed from Tatar and snapping it in one motion behind Holtby to give the Wings the lead.

The play started with Jakub Kindl walking the Capitals’ blue line from left to right.  He sent the puck back across to Franzen along the left wing wall.  Franzen stepped in, and having already scored twice appeared to command the full attention of the Capital defenders, including Holtby, who squared up for a shot.  Franzen faked a drive and sent the puck across to Danny DeKeyser, who had almost an open net at which to shoot.  He did not miss, and the Red Wings took a 3-1 lead to the locker room after two periods.

It certainly looked as if Detroit’s recent woes -- four straight losses, the last three in extra time on home ice -- would end as the teams took the ice for the third period.  The idea of that became less certain in the fourth minute of the period.  It started with Nicklas Backstrom taking defenseman Jonathan Ericsson for a ride around the back of the Detroit cage.  Trying to fend off Ericsson, Backstrom lost his glove but not his stride.  He circled all the way through with Ericsson on him and left the puck in the left wing corner.  Perhaps incredibly, Marcus Johansson beat Pavel Datsyuk to the puck then spun away from Datsyuk and headed behind the net.  Before he got there, though, Johansson slid the puck to the bottom of the left wing circle where Alex Ovechkin was arriving.  Ovechkin snapped the puck through defenseman Niklas Kronwall’s legs and over Howard’s right shoulder to get the Caps within a goal at 3:19 of the third period.

It might have ended that way.  It certainly was not expected to change when the line of Jason Chimera, Joel Ward, and Michael Latta took the ice at 11:29 of the period.  It was not expected to change after Joel Ward carried the puck into the Detroit zone and slid a pass to Jason Chimera trying to beat Kyle Quincey down the middle of the ice.  When Quincey got a stick in the way of the pass to deflect the puck to the end boards, harm seemed to be avoided by the home team.  Even when the puck came back to Ward in the corner, who sent it to Karl Alzner at the point, there was no imminent threat.  Then Alzner sent the puck across to John Carlson, open at the right point.  Carlson tried to get something started by throwing the puck on net where a clot of bodies had appeared.  The puck bounced off someone..something…maybe an octopus, given the venue.  Whatever happened to the puck after leaving Carlson’s stick, it found its way to the ice laying at the top of the crease, just out of the range of Jimmy Howard’s stick.

There stood Michael Latta.  Who stepped between Kyle Quincey and Pavel Datsyuk.  All alone.  With an open net in front of him.

The lead gone, the Red Wings were playing to hang on and perhaps catch a break or a bounce.  They could catch neither in regulation, and despite having an abbreviated 46 second power play in overtime could not get either in the extra session.  That left it to the freestyle competition.

The Red Wings, desperate to get the second point, resorted to trickery.  Todd Bertuzzi tried to execute a spin-o-rama, but it looked a bit like a rhinoceros executing a brisé in ballet.  Holtby watched the dance unfold and calmly poked the puck away.  That left it to Nicklas Backstrom skating slowly in on Howard.  As he got to the hash marks he darted to his left to get Howard to move.  When Howard opened the five hole to slide across, Backstrom took advantage.

-- The “one shot” theme certainly applied to Michael Latta’s first NHL goal.  It came on his only shot attempt of the game.

-- Backstrom leads the league in trick shot efficiency, hitting on all four of his attempts this season (he has the most goals of his fellow travelers at 100 percent).  Only Winnipeg’s Andrew Ladd has more goals (five).

-- Alex Ovechkin’s goal was his first point at 5-on-5 since the third period of a 4-1 win against Edmonton on October 24th.

-- Nicklas Backstrom led the team with six shots on goal.  It was close, but not a personal best.  He has had seven shots in a game three times.  No, shootout tries do not count.

-- Brooks Laich broke an 11-game drought without a goal when he recorded his third of the year in the first period.

-- Maybe it was efficiency, maybe it was scoring, but the Caps finished the night with 70.2 percent of their shot attempts on goal.  The other side of that is that the Red Wings had 61 shot attempts to the Caps’ 47.

-- From the “thanks for coming, here’s your hat" file, Michael Latta did not skate another shift after scoring his game-tying, career-first goal.

-- The penalty killers are showing some fraying on the edges.  It is the fourth time in the last seven games opponents scored at least one power play goal, including the two scored by Detroit in five tries last night.  Over those seven games the Caps are 25-for-31 (80.7 percent).  The Caps have also allowed five or more opportunities four times in those seven games, allowing at least one goal in three of them.

-- On the other side, last night was the third game in a row that the power play came up empty for Washington.  That ties a season high streak set in the last three games of October.

-- That is 11 of his last 13 appearances in which Braden Holtby faced 30 or more shots.  One of the instances in which he did not was when he was pulled after allowing three goals on 14 shots in 12:48 of work against Calgary on October 26th.

-- Looking at the time on ice for the defense with Mike Green out yields the expected and the strange.  Yes, John Carlson was going to get Mike Green’s power play time (6:43), and he was going to get big penalty killing minutes with Karl Alzner (5:51 apiece) on his was to more than 32 minutes of ice time.  But Tyson Strachan getting almost 22 minutes in his call-up from Hershey?  His 19:16 at even strength being more than Alzner got (18:21)?

-- Then there was Steve Oleksy.  He finished the night with barely 10 minutes of ice time and had only three shifts in the third period.  That writing was put on the wall when Johan Franzen scored two goals from Oleksy’s side of the ice in the first period, once when he was on the other side of the crease entirely, tied up with Darren Helm.

Now the Caps come home for a big week of three games against three teams of wildly different styles – the suffocating system of St. Louis, the persistent pressure of Pittsburgh, and the mélange of… well, something that starts with an “M” of Montreal. But this is a team that is now 6-1-1 in November.  They’ll be rested, ready, and rarin’ to go.