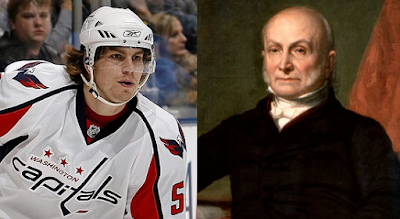 John Quincy Adams was America’s sixth President.  He was the first son of a President to take the oath of office.  While one of a select few to hold the office, it could be fairly said that he did not have the resume of accomplishments his father – John Adams – had.  In that respect, and some others, he resembles another son of a more accomplished father, a son who played for the Washington Capitals – Chris Bourque.

Adams the Younger had what was arguably an undistinguished term as President.  He served but one term, losing his re-election bid to Andrew Jackson in 1828.  He had quite a list of accomplishments before he became chief executive, though.  Minister to the Netherlands, Minister to Prussia, Minister to Russia, Minister to the Court of St. James, member of the House of Representatives, senator from Massachusetts, and Secretary of State, all of which he accomplished over a 30 year-period in public service before becoming the sixth President of the United States.

If John Quincy Adams was the well-traveled son of a former President in his climb to the White House, Chris Bourque was the well-traveled son of an NHL Hall of Famer.  From Cushing Academy in Massachusetts, Bourque moved on to the Boston University Terriers in the NCAA for a year after he was taken in the second round of the 2004 entry draft by the Caps.  Then he started his way up the Caps organization, playing with the Portland Pirates late in the 2004-2005 season before the AHL affiliation moved to Hershey and the Bears.  Bourque played two seasons with the Bears before making his NHL debut in the 2007-2008 season.  He ended up playing just 12 games with the Caps over two seasons before he was waived and claimed by the Pittsburgh Penguins.  Barely two months later, after playing in 20 games for the Pens, he was waived again and re-claimed by the Capitals.

Bourque played just one game with the Caps in his second tour with the organization, spending most of his time in Hershey and wining a Calder Cup with the Bears in 2010 as well as the Jack Butterfield Trophy as the most valuable player of the AHL playoffs.  Finding his path to the NHL blocked, though, he headed to Europe to start the 2010-2011 season, joining the Atlant club in the KHL. Lasting just eight games there, Bourque then moved on to the HC Lugano team in the Swiss League.  After the season he returned to North America and the Capitals for a third time, this time failing to crack the parent roster.  He did play in 73 games with the Hershey Bears.  He was traded late in the spring of 2012 to the Boston Bruins for Zach Hamill and split time between the Bruins and the AHL Providence Bruins in the 2012-2013 season.

After that, Bourque was on the move once more, heading back to the KHL and the Kazan Ak-Bars club, followed by a trip to the Biel HC club to close out the 2013-2014 season.  Then it was back once more to North America, first with the New York Rangers’ AHL club in Hartford, then this past season once more in the Hershey with the Bears where he led the league in points (80 in 72 games).

Chris Bourque is under contract to the Capitals for the 2016-2017 season, but who knows where his travels will take him after that (if not sooner)?  In that sense, as much as he is the son of a more famous father, he has much in common with John Quincy Adams.