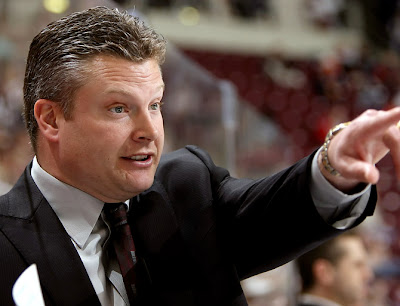 Definition: the discipline dealing with the art or science of applying scientific knowledge to practical problems.
The Washington Capitals announced this morning that Bob Woods, head coach of the Calder Cup Champion Hershey Bears, has been hired as an assistant coach with the Caps.
This, of course, qualifies as "promoting from within," but there is an "applied science" aspect to this, too. Since the beginning of the relationship between the Capitals and the Bears, much has been made of the "one philosophy" approach, the "brand" of hockey reflected in this philosophy.
Well, now we get to see this theory applied. If you're going to play one way, whether in Hershey or in Washington, then it makes sense to employ coaches who embody that style, who have successfully employed the brand. Woods has been successful -- an 83-46-16 regular season record over almost two years and a 17-10 playoff record, including a 16-6 mark this year culminating in a Calder Cup is evidence of that.
But there is the danger, too, of inbreeding. The danger of too much of one school of thought. The Capitals are not entirely without a history with respect to the matter. Recall that Terry Murray once played with the Caps for his brother, Bryan (1981-1982), then succeeded him as Capitals coach after serving as head coach of the Capitals' affiliate in Baltimore and as an assistant with the Caps. In the five years that Terry served as Bryan's assistant, the Caps went 220-140-40, and in the first of those years, Bryan won a Jack Adams Award.
Woods is likely to be called upon to conjure up some improvements from the blue line, he having been a defenseman and his being called upon to replace Jay Leach, who had that responsibility.
We're going to find out if practice proves the theory in the applied science of building a Stanley Cup champion.

Posted by The Peerless at 12:13 PM No comments: