The Peerless Prognosticator is ON THE AIR!!! -- Caps vs. Predators, October 28th 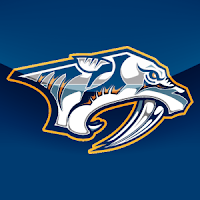 The Capitals are back home tonight after a 1-2-0 road trip to take on the Nashville Predators. It is an opportunity for Caps fans to gaze in wonderment at what might be the most gawd-awful uniform ever foisted upon a team in the National Hockey League (well, since those pajamas the Flyers wore some years back, anyway). Not least bizarre in the scheme is the team logo, some sort of prehistoric creature with some serious overbite issues. The Peerless tracked down the esteemed paleontologist, Dr. Alan Grant, to get his take on just what this odd creature is…

“This isn’t about some park you want to open, is it?”

No, Dr. Grant…we’re not opening a park. Dr. Grant, we wanted to get your opinion on the creature depicted in the logo of the Nashville Predators hockey team. You’ve seen it, I take it?

“Not much of a hockey fan, myself…I’m usually out in the field digging up bones or trying to escape the odd velociraptor.”

Well, here the logo is some sort of creature that resembles the saber-toothed tiger.

“Ah, well, there is your first mistake. It is a common one. The saber-toothed ‘tiger’ is not a single species at all, but serve to describe a group of species, some of which are related to kangaroos.”

“Yes, but what most people associate with the ‘saber-toothed tiger’ is a member of the ‘smilodon’ genus.”

“Only if it’s in a dig…sorry, that’s a paleontology joke.”

So, is this the basis for the logo of the Predators?

"Well, no…the teeth are much too large in relation to the cranial vault. If I was to hazard a professional opinion, I think that the basis of the logo is Jerry Lewis…probably from the early Nutty Professor period."

Thanks, Doc…As for tonight’s game, the Predators come into it with very middle-of-the-road numbers:


This is another of those Western Conference teams that Caps fans don’t get to see much of. The Predators have played in Washington once in the last four seasons, taking away a 5-2 win in December 2005 (it’s so long ago, Ben Clymer had a goal in that one, and the Caps had assists from Andrew Cassels, Jamie Heward, and Brian Sutherby).

This Predator team suffers the low expectations of comparisons with the Stanley Cup champion Detroit Red Wings and this season’s “it” team, the Chicago Blackhawks in their own division. This will be the Predators’ first game against an Eastern Conference opponent this year. In an eerie way, the team that employs former Capitals General Manager David Poile in a similar capacity looks more than a bit like the Capitals teams under Poile.

For instance, the Predators are led in scoring at the moment by a defenseman – Shea Weber (the 1990-1991 Capitals team was led in scoring by defenseman Kevin Hatcher). Weber is part of a solid, if not spectacular blue line (which sounds like the Caps of the late 1980’s and early 1990’s) that includes Ryan Suter, Dan Hamhuis, and Greg DeVries.

This year is very much a return to a defense-centric attack. The blue line has amassed seven goals in the eight games thus far. Weber has three of them, and only Hamhuis and Ville Kostinen among the defensemen have not scored a goal for Nashville. As a group, they have 22 points (the Caps’ blueliners have a total of 16 points).

The Predators – again, like many of those old Caps teams – lack high-end scoring talent, but they do have balance. Three players – Weber, J.P. Dumont, and Jason Arnott – have put up at least a point a game through eight games. Seven others have average at least a point every other game, among those players playing in at least half (four) of the Predators’ games.

What the balance the Predators bring to the game has done is permitted them to get off to fast starts. No team in the league has scored more first period goals than Nashville (11, tied with Chicago and Calgary). That could be critical, given that the Caps have allowed the fourth highest number of first period goals this year (11, tied with Dallas). The other side of that coin is that only seven teams have scored fewer than the seven goals the Predators have in the third period this year.

Nashville also can score in bunches. Twice this season the Predators have scored three goals in less than four minutes, and those six goals were scored by six different players. Five of them were at even strength.

In goal, Dan Ellis has gotten the call in all eight games this year for Nashville, starting in seven of them (he came on in relief of Pekka Rinne after Rinne allowed three goals on eight shots in a 5-3 loss to Columbus). If Ellis is called upon once more, he is 0-1-0, 12.00, .625 in one career appearance against the Caps. He gave up three goals in the opening 14:40, at which point he was pulled in a 4-2 loss to Washington last season.

If there is one Predator who has a history against the Capitals, it’s Bruce Garrioch’s favorite trade rumor on skates, Radek Bonk. In 42 career games against Washington, most of them as a member of the Ottawa Senators, Bonk is 8-15-23, +9, with three power play goals and a game winner. He’s off to something of a slow start with Nashville (1-1-2, -1 in six game) but will be a player to watch.

With the “other” Alex out for this game, Semin now gets a lot of the focus Ovechkin was getting early on. The league’s co-leader in total scoring and third leading goal scorer has one goal in two career games against Nashville – it happened to be the one that touched off the three-goal barrage that ended Dan Ellis’ night early last year.

The Caps have done it this year without Ovechkin being at the top of his game. Now, they have to do it without him in the lineup. Those are different things, owing to the fact that even as he had “only” two goals in eight games, Ovechkin commanded attention. Now, that attention will be lavished on others. This will probably be a tighter game, and if the Caps don’t get caught up in the old “we’re back home, let’s put on a show for the crowd” mentality, they should do just fine.