Countdown to Opening Night by the Elements: Number 32

There are just 32 shopping days until Opening Night of the 2013-2014 NHL season, and Fearless is shopping for number 32 on the list of elements… 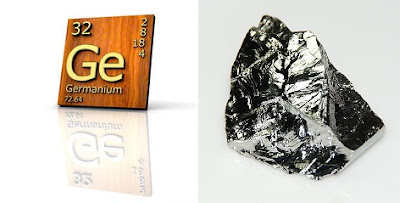 Germanium was an idea before it was an element.  That requires some explanation, one that starts in Siberia.  That is where the Russian chemist Dmitri Mendeleev was born.  Mendeleev would grow up to be one of the most important figures in the field of chemistry, the creator of the periodic table of elements.  The table, based on Mendeleev’s “Periodic Law,” allowed for the prediction of elements not yet discovered.  In 1869 Mendeleev predicted the existence of several elements using this Law, one of them occurring on the periodic table between silicon and tin.

It would take another 16 years before that element was discovered, at a mine near Freiberg, Saxony, Germany.  Chemist Clement Winkler isolated the new element from a mineral that also contained sulfur and silver.  He named it, “Neptunium,” not knowing that the name had already been assigned to another theorized element (that did not work out…the name ”neptunium” would not be used until an element was discovered in 1940, but we digress).  Left with having to use another name for his newly discovered element, Winkler plumbed the depths of his imagination and came up with “Germanium.”  Winkler was German, the element was discovered in Germany…duh.

The early history of germanium was hardly promising.  It was a metal, but was generally thought to have poor conducting properties.  Then, however, applications for it were identified – use as a semiconductor material, specialty electronic devices, transistors, fiber optics, night-vision appliances, precious metal alloys.

It is generally characterized by low reactivity, but can react violently with certain chemicals.  It is one of only a few substances that expands as it solidifies from its molten state.  And, although it was theorized by a Russian and discovered in Germany, much of its production these days in in China and the United States.

What we have then is an element that existed in theory, but one that would not become a reality until discovered years later (sort of like a player who is drafted in the first round, but who does not become a full-fledged starter for more than eight years thereafter).  It is an element discovered in one place, but is produced mainly in other parts of the globe (not unlike a player born in one place, but who lived in a number of other cities before he settled in the city in which he would spend his career).  It is that rare element that expands when solidifying (not unlike a player who needs to fill a space to be a “solid” contributor).  It is an element that is often stable and unreactive, but one that can react violently at times under special conditions (the equivalent of a volcanic temper you might find in a player?).

Germanium…the “Olaf Kolzig” of the periodic table of elements.