Now that you have thoroughly digested our look back at the Washington Capitals’ draft history by round over the 2001-2010 period, we return to our look at the draft to examine those drafts by position.  We will work our way out from the net.  That means…goalies.

The Caps have not shown a particular preference in where their drafted goalies were selected.  Five of the ten taken over these ten years were selected in the first four rounds, another five in the last five rounds. 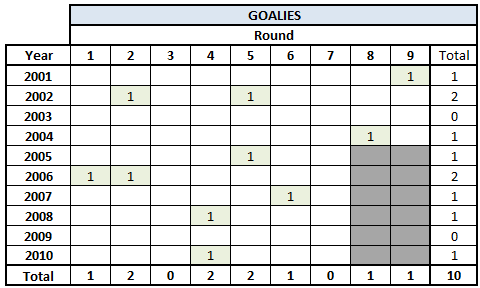 None of the five have appeared in an NHL game.  As a group, they have a combined 187 games of AHL experience (all from Gherson and Machesney), although none played at that level in the 2012-2013 season.  Müller, Caps fans might remember, passed away all too soon in 2009, the victim of a brain tumor.

The second group of five is, as one might expect from their collective higher draft positions, more accomplished.  Only Daren Machesney, selected in the second round in 2002, has not appeared in an NHL game.  The others, with the regular season NHL experience, include:

There is, however, an odd dynamic playing out with these selections.  First, three of them already have spent time as the Caps’ number one goaltender – Varlamov (when he was not injured), Neuvirth (when he was), and Holtby.  But their ascension to that position was not clean or simple.  The Caps have had to dip into the free agent market along the way.  Jose Theodore was signed in 2008 to a two-year contract because Olaf Kolzig was gone after spending 16 years with the Caps, and Varlamov was not ready.  After Varlamov was traded in 2011, Tomas Vokoun was signed to a one-year deal because, despite his playing in the majority of the Caps’ games in the 2010-2011 season, Neuvirth might not have been quite ready in the 2011-2012 season to be the permanent solution at the position.  The Caps were buying time for development.

Neuvirth, in fact, might have been passed by with the development of Braden Holtby.  Taken in the fourth round in 2008, Holtby’s rise through the system has been swift.  After a superb playoff performance in 2012, he took over the number one goaltender job for the 2013 season.

You might expect that a team that chooses to build from the draft would feature drafted goaltenders as their number one in the depth chart.  The Caps, in fact have done just that, going back into the dim reaches of time.  Almost 900 games of the 1,196 contests since the 1997-1998 season have been played with goaltenders drafted by the Caps.  Of course, the large majority of those were played by Olaf Kolzig, but this is a team with a history of sticking with goalies it drafts.

If there is a disturbing subplot to this it is that the Caps have burned through three draftees as number one goaltenders since the 2010-2011 season.  Varlamov could not hold the job, owing in large part to injuries, and Neuvirth just could not seem to grab the position by the throat.  Braden Holtby took over when Neuvirth (who took over for an injured Tomas Vokoun) was injured late in the 2011-2012 season and has held it since.  At the moment, he seems most likely of the three to build a larger resume as the Caps’ number one netminder.

There is a logic in the manner in which the Caps have drafted at this position.  In the first half of the 2001-2010 period they had a durable, high-performing number one goaltender in Olaf Kolzig and could populate the back-up position with lower cost free agents (a Craig Billington) or developmental projects (Sebastien Charpentier).  The club could take a flyer, so to speak, on longer shot, late round picks.  They also thought they had a potential replacement for Kolzig in Maxime Ouellet, who they obtained in trade in 2002.

Ouellet did not work out for the club, playing in only six games in a Caps sweater, all in the 2003-2004 season.  With Kolzig aging and no clear heir apparent, there might have been a higher sense of urgency about filling the position from within.  Higher-round draft picks at the position were a reasonable course of action, and starting in 2006, with the selections of Varlamov and Neuvirth, this was what unfolded.

In the end, there is no such thing as too much goaltending.  Oh, you can pay too much for goaltending (Mr. Luongo?  Mr. Price?  Mr Ward?...please raise your hands), but you can’t have too much of it.  Consider that way back in the 1994-1995 season, in a 48-game season no less, the Caps dressed three drafted goaltenders.  Jim Carey (2nd round, 1992), Olaf Kolzig (1st round, 1989), and Byron Dafoe (2nd round, 1989) all saw action.  Three seasons later the Caps were banking on a goalie they traded for – Bill Ranford (sending Jim Carey to Boston in that trade).  When Ranford was injured in the first game of the 1997-1998 season, Olaf Kolzig – one of the drafted goaltenders – took over, and the rest was history (including Ranford).

In that sense, plus the fact that the Caps have so much invested in cap room at other positions, getting value out of draft picks at the goaltender position is essential for success on the ice.  The Caps have gotten that out of their picks over the 2006-2010 period.  In 2013-2014 they will pay just $4,350,000 in cap room at the position with Holtby and Neuvirth tending goal.  There are 16 individual netminders who will have larger cap hits.  At this position the Caps have been quite efficient in their draft performance.

Posted by The Peerless at 8:56 AM No comments: