John Carlson
Theme: “There are certain queer times and occasions in this strange mixed affair we call life when a man takes his whole universe for a vast practical joke."

(click pic for larger image)
What a strange affair the 2010-2011 season was for John Carlson. As we pointed out in our look at Carlson and his tens at the end of last season…

One might have though Carlson would trace further upward his developmental arc this season. And in fact, in his first three ten-game segments of the season it look as if Carlson would do just that. He was 5-15-20, plus-5 – a 14-41-55, plus-27 pace. And had he finished along those lines, he would have ended up fifth in goal scoring among all defensemen, tied for third in assists, second in total points, and tied for third in plus-minus.

The operative phrase in that last sentence is, “had he finished along those lines.”

What happened after is part confounding, part confirming. And what happened is this. Carlson played the last 52 games of the season to a line of 4-8-12, minus-20. That is a 6-13-19, minus-32 pace. In scoring it resembles more Jan Hejda (5-14-19) than a top-five scorer. And that minus-32 pace, had he finished the season there, would have ranked 296th of 297 defensemen. That’s right, only Milan Jurcina (minus-34) would have been between Carlson and last in the league that measure. As it was, he finished 276th. This is not the territory one would have thought John Carlson would be found this season, not after being named to the league’s All-Rookie Team as a defenseman in 2010-2011.  Here is how last season compared to this for Carlson: 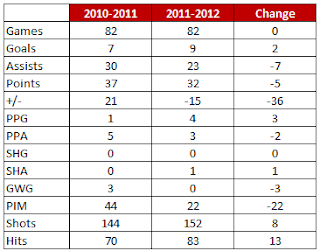 That’s the confounding part. Well, part of it. Another part of it is that he should have played to such a level of performance for Dale Hunter, who was his coach at London in the Ontario Hockey League for 59 games in the regular season (16-60-76, plus-23) and 14 playoff games (7-15-22, plus-11) in 2008-2009. But that brings us, perhaps, to the “confirming” part, Playing defense in the NHL is hard. There is a long learning curve for the position.

But just for kicks, we took a look at hall of fame defensemen over the last 50 seasons in their rookie and second full seasons. The misfortune that befell Carlson is not the norm among that group, but it is not unheard of, either, for a defenseman to make a splash in his first season and regress in his second, even among defensemen who would reach the Hockey Hall of Fame. Of 17 defensemen in that group, two names you might recognize stumbled in their second season:

Part of that could be the quality of teams on which they played, but Leetch’s Rangers had 82 standings points in his rookie season (1988-1989) and 85 points the following year. Murphy’s Los Angeles Kings did drop from 99 points in his 1980-1981 rookie season to 63 points the following year. Sometimes it is quality of team, sometimes not. It is all part of the odd mix of the position.


Odd Carlson Fact… Competition apparently motivates Carlson. Against the other 15 teams qualifying for the playoffs this season he was 5-12-17, even, in 41 games. Against the other 14 teams that did not qualify for the post season he was 4-11-15, minus-15, in 41 games. That could be a team effect on plus-minus, but the difference is stark. And if you think there is a “Western Conference” factor in this, he was 2-3-5, plus-2, in eight games against Western Conference playoff qualifiers that do not play in California (where or against whom the Caps generally fare poorly; he was 0-0-0, minus-5 in three games against San Jose and Los Angeles).

Game to Remember… December 7, 2011. After falling behind the Ottawa Senators, 2-1, just before the second intermission at Scotiabank Place, the Caps roared back with three goals, Carlson assisting on two of them. He added an empty net goal for insurance and to cap one of two three-point nights he had on the season. Coincidentally, his other three point night took place in the Caps’ previous game, a 5-4 loss to the Florida Panthers in which Carlson assisted on the Caps’ last three goals as part of a furious comeback from what was a 5-1 Panther lead 39 minutes into the game.

Game to Forget… March 27, 2012. In his first seven shifts against the Buffalo Sabres at Verizon Center, Carlson was on the ice for three goals, and one of the shifts in which he was not on the ice lasted all of eight seconds (another shift lasted eight seconds, and a goal was scored by the Sabres). This would be called a “bad start.” He was thereafter stapled to the bench for long stretches, getting only 8:19 of ice time in the last 37:29 of the game in a 5-1 loss.

Post Season… Both Carlson and Karl Alzner were on ice for 11 of the 30 goals allowed by the Caps in the post-season (tied for second among Caps defensemen), but this is deceiving. Both he and Alzner skated to an average of more than 24 minutes a night for 14 games (tops on the team), and both skated more than two and a half minutes a night killing penalties (also tops on the team). On a club that played 13 one-goal games in 14 contests, every shift was critical, and Carlson and Alzner got most of the ones that could be called “most critical.” Of 38 defensemen having played in at least ten games in these playoffs, In the playoffs Carlson displayed both the talent he displayed in his rookie year and offered a glimpse into his future.

In the end, it is tempting to think that Carlson’s last 50 games were the product of youth, the difficulties of the position, and intermittent lack of focus. That he would play as well as he did against better competition during the regular season and raise his game in the playoffs lends credence to this view. He is, if not yet a “core” player (we would like to see an improvement next season and more consistency throughout for that), he is a “foundational” one, along with his frequent partner, Karl Alzner. If he can display that consistency and the level of performance he displayed early and late in the season, he might fulfill the promise suggested in Elliotte Friedman’s “30 Thoughts” for CBC.ca… “Even referees think John Carlson is going to win a Norris Trophy someday.”