The Peerless Prognosticator is ON THE AIR!!! -- Game 46: Devils at Capitals, January 11th

The Washington Capitals return home on Saturday night to open a three-game home stand, their longest in almost two months, hosting the New Jersey Devils at Capital One Arena in the first of two meetings between these teams in Washington in less than a week.  The Caps will be looking to extend their home record in 2020 to a perfect 3-0-0, while the Devils will be trying to avoid seeing a losing streak grow to four games. 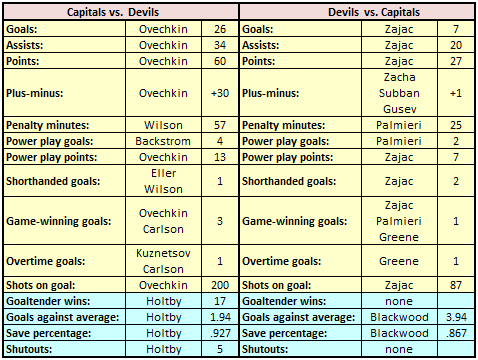 The path to stardom is often neither straight, nor smooth, even for top overall draft picks.  That is the lesson being learned by Jack Hughes, the first overall pick in last summer’s draft by the Devils.  He is one of three members of his draft class to dress for NHL games this season and is tied with Kaapo Kakko, the number two overall pick by the New York Rangers, for most points (16).  Kirby Dach (11 points), taken third overall by the Chicago Blackhawks, rounds out the trio from the 2019 draft class to play in the NHL this season.

Hughes started his rookie season slowly, going without a point in his first six game before breaking out with a run of points in six of eight games and going 4-5-9 in that stretch.  However, the end of that streak started another one.  Hughes went the next 18 games without a goal, posting four assists along the way before ending the drought with a goal in Chicago against the Blackhawks on December 23rd.  It was one of two goals and an assist that Hughes would post in four games before sustaining an upper-body injury against Boston on New Year’s Eve that has kept him out of the lineup since.  Reports are that his injury is not believed to be overly serious, and he will be re-evaluated for Saturday’s game against the Caps.  Hughes’ only appearance against the Caps to date was in the Devils’ 6-3 loss to Washington on December 20th.  He did not record a point or a shot on goal in 16 minutes of ice time.

At the other end of the draft spectrum was Nikita Gusev, taken by the Tampa Bay Lightning in the seventh round of the 2012 draft, whose rights were traded to the Vegas Golden Knights in June 2017, and who was subsequently traded to the Devils in July 2019 for a 2020 third round draft pick and a 2021 second round draft pick.  Gusev is in his first NHL season, but at age 27 cannot be considered a “rookie” under NHL rules (26 years of age is the age cutoff point).  He spent the last seven seasons in the KHL for three teams (Amur Khabarovsk, Yugra Khanty-Mansiysk, and SKA Saint Petersburg) before coming to North America this season.  He leads all Devils’ “first-year” players in goals (seven), assists (18), and points (25), his 25 points ranking third among all “first-year” players in the NHL.

Gusev started slowly on the road for the Devils, posting just two points (both goals) in his first nine road contests.  Since then, though, he has points in seven of 11 road games and is 1-10-11, plus-1, in those games.  He takes a four-game road points streak into this game (1-5-6).  He had a pair of assists in the loss to the Caps in December in what is his only appearance against Washington to date.

Ken Daneyko and Scott Stevens.  That is the answer to a trivia question, “how many defensemen have played in more games for the Devils than Andy Greene?”  Greene, who has played in 909 games for the club, almost certainly will not catch Daneyko (1,283 games), but he could overtake Stevens for second place (956 games) next season, if he is re-signed to a new contract.  He will be an unrestricted free agent at the end of this season when his current contract, a five-year/$25 million deal, expires. Greene is not what one would consider an “offensive” defenseman, but by sheer longevity he is among the franchise leaders among defensemen in goals (47/fifth), assists (193/fifth), points (240/fifth), power play goals (15/seventh), shorthanded goals (two/tied for fourth), and game-winning goals (11/fourth).  He has done this despite never having reached double digits in goals in any of his 14 seasons with the Devils (he has a high of eight in 2013-2014 and has none in 39 games this season) and topping 30 points only twice in those 14 seasons (37 in 2009-2010 and 32 in 2013-2014).

This season, Greene’s offense has dried up almost completely.  He opened the season without a point in his first five games but then posted four points (all assists) over his next three contests.  Since then, Greene has one point (an assist) in his last 31 games.  Odd Greene Fact… the Devils have not won a game this season in which Greene skated less than 19 minutes (0-9-2).  Greene is 3-6-9, minus-19, in 45 career games against Washington. 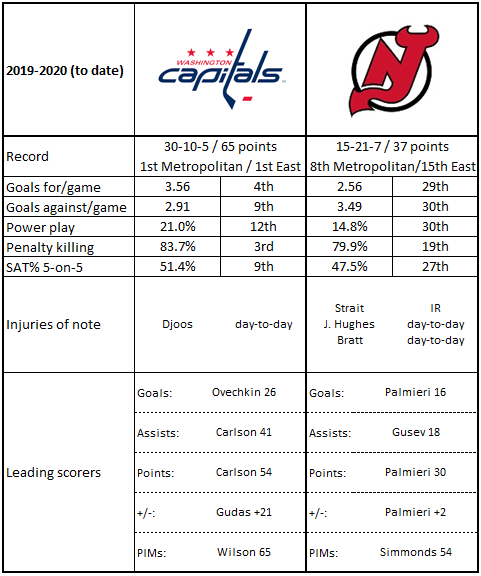 3.  The Devils have been adept penalty killers on the road lately.  In their last 13 road games, their 88.7 percent penalty kill is second in the league, while their net penalty kill (accounting for shorthanded goals scored) of 94.3 percent also ranks second.

4.  What has cause the Devils problems over those last 13 road games is getting dominated earl y (outscored 20-11 in the first periods of those games) and unable to generate offense late (nine third period goals, fifth fewest in the league over that span).

5.  Another problem area in those 13 road games has been penalties.  Their net penalties (penalties taken to penalties drawn) per 60 minutes of mimus-0.84 is third-worst in the league over that span.

3.  Washington has had no such issues late in games on home ice.  In ten of their last 14 home games they scored at least two goals in the third period, 23 goals in all.

4.  The Caps have shut teams down late in home games of late, for the most part.  In their last 17 home games, the Caps allowed a total of ten goals, three of them in a 5-2 loss to Columbus on December 9th.

5.  Only two teams in the league have scored fewer goals at 5-on-4 on home ice than the Caps (nine): the New York Islanders (eight) and Ottawa Senators (six).

If you are a hockey fan, you have to echo what the Devils Twitter feed on MSG said… “MacKenzie Blackwood, man. Gotta love this dude.” 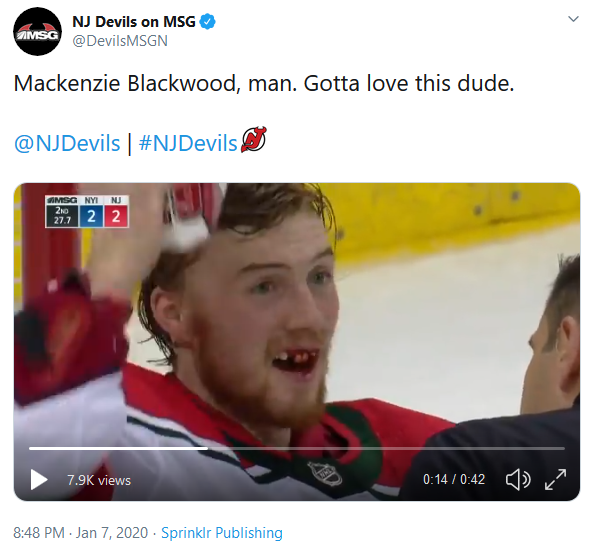 For those of you not aware, Blackwood took a shot from the New York Islanders’ Ryan Pulock right on the chin of his mask with less than a minute left in the second period of Tuesday’s game between the teams.  He lost a few teeth and was bleeding from the mouth, but he strapped his mask back in place, finished the period (making a superb save on an attempted wrap-around shot by Casey Cizikas with a dozen seconds left in the period), and then played the third period in the Devils’ 4-3 overtime loss to the Isles.  It was not bad enough that he was already feeling under the weather going into that game.  He has since spent some time with the dentist, but he was back in the lineup for New Jersey’s 6-3 loss to the New York Rangers on Thursday.

It is part of a rough start to the new year for the rookie netminder.  He won his first decision of the new year, stopping 29 shots in a 2-1 win against the Islanders on Long Island.  However, he is winless in his last three appearances (0-2-1) stopping only 86 of 99 shots (.869 save percentage) in addition to his injury and significant dental repair.  Nevertheless, he leads all rookie goalies in appearances (34), starts (31), and wins (14).  He ranks in the middle of the pack among 19 rookie goalies to dress this season in goals against average (2.97/seventh) and save percentage (.905/tenth).  Blackwood has been something of a road warrior for the Devils.  Not so much as the Caps’ Ilya Samsonov, perhaps, but his 9-5-0, 2.96, .913 record on the road is impressive, given the Devils’ place in the standings.  Blackwood is 0-3-0, 3.94, .867 in three career appearances against the Caps.

When Brendan Leipsic recorded an assist on a Nic Dowd goal last Sunday against the San Jose Sharks, he and Dowd became the 13th and 14 players for the Caps to reach double digits in points this season.  For Leipsic, it might be a bit disappointing that he has ten points in 45 games with the Caps this season when he had 18 points for the Los Angeles Kings in 45 games last season.  Then again, his role has changed.  With the Kings last season, a team in something of a rebuild mode, he averaged more than 14 minutes per game, eighth among forwards dressing for at least half the Kings’ games (and more than Carl Hagelin did in 22 games for the Kings, it might be worth pointing out).  He averaged 1:36 in power play ice time, something he does not do for the Caps (22 seconds per game so far this season).

Slotted more, and what appears more consistently, in a fourth line role, his numbers are off from last season in a number of other categories on a per-game basis: penalty minutes (0.49 last season/0.13 per game this season), shots on goal (1.24 last season/0.96 this season), blocked shots (0.56 last season/0.29 this season), hits (1.00 last season/0.89 this season), and takeaways (0.27 last season/0/16 this season).  But this could be as much a factor of his ice time as much as performance during those minutes.  Points and ice time have been hard to come by for Leipsic since Thanksgiving.  In 19 games since the holiday he has two assists and is plus-4, averaging just 9:26 per game.  Perhaps surprisingly for a player with as feisty a reputation as he has, Leipsic has only two penalty minutes in those 19 games.  In three career games against New Jersey, he is 1-1-2, even.

This is not a game that the Caps should lose.  New Jersey has allowed 15 goals in their last three games while scoring only eight of their own.  They are 2-for-24 on the power play over their last eight road games (8.3 percent) and gave those goals back with a pair of shorthanded goals against to post a net power play of 0.0 percent over those eight games.  Their penalty kill has been good on the road, going 41-for-43 (95.3 percent) in 11 road games, but then they gave up a pair of power plays in Madison Square Garden to the Rangers in their last road contest.

On the other hand, the Caps have been underwhelming at home so far, their points percentage on home ice tied with the Islanders for fifth best in the league (.714).  The Caps have been able to beat up on weak defensive teams on home ice (six goals against Ottawa, five against San Jose, five against Anaheim, all in their last 11 games at home), and the Devils qualify as a team that has defensive issues.  This game might have its moments, but the Caps should extend their home winning streak to three games.