Washington Capitals -- That Was The Week That Was: Week 9

The week that was, was quite a week.  When it started, the Caps were about to gasp their last breath of the season, taking to the road for a four-game swing covering more than 2,500 miles and three cities, including a back-to-back set of games in hostile Winnipeg.  When the week ended, it seemed as if the Caps had a second wind. 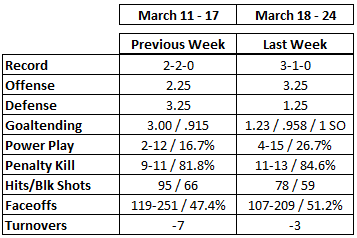 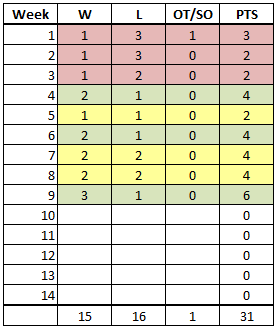 The Washington Capitals recorded their first three-win week of the season, going 3-1-0.  It was their sixth straight non-losing week, although it happened to be only the third winning week in that string (an overall record of 12-8-0).  In winning the last three road games of the week, it was the first time that the Caps won three consecutive road games since doing it on February 25th, March 10th, and March 14th of last season.  It was the last time that the Caps won three consecutive road games on the same road trip since March 25-29 in the 2007-2008 season as part of their season-ending seven-game winning streak to secure a playoff spot.

The NHL is a front-runner’s league, and for the Caps this week was no exception.  Washington won the three games in which they scored in the first period, scoring two goals in each of the wins over Winnipeg and again against the New York Rangers on Sunday.  If one word described the Caps’ offense this week it was this – "efficient."  Washington scored 13 goals on 102 shots (12.8 shooting percentage) overall and was 12-for-73 in the three wins to close the week (16.4 percent).  The Caps were outstanding at even strength in the three wins, scoring nine goals on 52 shots (17.3 percent)

The Caps had a deceptive week defensively, at least as far as the top-end numbers are concerned.  Allowing four teams a total of 119 shots on goal is not bad, but that should be tempered by the fact that they held Winnipeg to only 20 shots in the 4-0 shutout on Thursday.  In each of the other three games the Caps allowed opponents 30-plus shots. They allowed 95 shots on goal at even strength (compared to 77 of their own).  They were “out-Fenwicked” in each game, even in the two blow-outs in Winnipeg, allowing a combined total of 168 shots-plus-missed shots compared to a total of 145 of their own.

It was Braden Holtby’s world, and welcome to it.  Holtby started and finished all four games.  He was consistent and occasionally brilliant.  If not for a one-in-a-thousand shot from a grinder that beat him far side where the crossbar and post intersect, and a misplay of his own off the heel of his stick and into his own net, he might have had a perfect record in first periods this week.  As it was, he stopped 34 of 36 first period shots for the week (.944 save percentage).  He was even better in the second (37-for-38, .974) and third periods (38-for-40, .950), as well as being perfect on five shots in the only overtime period he played this week. His 4-0 whitewashing of Winnipeg was his fourth shutout of the season, tying him for second, one behind Nashville’s Pekka Rinne.  Holtby has seven fewer appearances than does Rinne.

The word here is “consistency.”  Four games, four power play goals, one in each game.  “Efficiency" would apply, too.  The Caps recorded their four goals on a total of 19 shots (21.1 percent shooting) and 22:33 of total power play time (15 power plays).  If you had to look for an analogy for the Caps’ power play, it might be a southpaw prize fighter.  The Caps would jab-jab-jab with their right hand – Nicklas Backstrom, Mike Ribeiro, and Mike Green working the right side of the 1-3-1 set up.  It would all be prelude for loading up the big left hook.  That would be Alex Ovechkin on the left side of the formation, who converted three of nine power play shots he took for the week (33.3 percent), and one of his other shots on goal resulted in an assist on a Nicklas Backstrom power play goal.

One could say that the Caps had a good week overall killing off 11 of 13 opponent power plays, but their sense of timing needed work.  Both power play goals figured in the decisions of those games.  The Caps allowed Paul Martin the game-tying goal on the power play in what would be a 2-1 loss to Pittsburgh.  Then in the last game of the week, the Caps allowed Derek Stepan to tie the game late in the first period on a 5-on-3 power play.  It would be the last goal scored in regulation and overtime of the Caps’ game against the Rangers.  In a sense they were quite efficient.  Pittsburgh peppered the Caps with nine power play shots (one goal) in 3:59 of power play time.  But in the last three games of the week – all of them wins – the Caps allowed only ten power play shots in 17:54 of penalty killing time.

The overall number look decent – a better than 50 percent week – but they mask some odd goings on, too.  For example, the Caps were a superb 46-for-72 in the defensive zone over the four games (63.9 percent) including a 15-for-16 performance in the defensive end in their 6-1 win over Winnipeg on Friday.  Good thing, too, because as far as faceoffs were concerned, the ice was tilted to the Caps’ end of the ice – 72 defensive zone draws taken against 60 in the offensive end.

The unusual thing here is what looks like an odd official scoring effect in Winnipeg.  In Thursday’s game – a 4-0 Caps win – the two teams combined for a total of 17 giveaways (five for the Caps, 12 for the Jets).  In the second game in Winnipeg of Friday night, the teams combined for 35 giveaways (20 for Washington, 15 for Winnipeg).  Did the Caps get sloppier, or was it interpretation?

The Caps grabbed back their season by the throat, clawing back to within two points of a eighth place and five of the Southeast Division lead with a game in hand on Winnipeg.  But before we get carried away with congratulations for the Caps on their resilience, let us think about a few things.  Is a 17.3 percent shooting percentage at even strength sustainable?  Can the Caps improve on their record on the road against non-Southeast Division opponents (yesterday’s win over the Rangers was their first such win this season)?  They have five more such games.  Will teams adjust to the Caps’ 1-3-1 power play?  Will Alex Ovechkin keep pounding home power play goals at the rate of better than a goal every other game (four in his last seven contests)?  Is Braden Holtby rounding into playoff mode, or is this merely a hot streak?

Cautious optimism are the watch words as the week ends. The Caps earned their opportunity to fight for one of the eight playoff spots, no doubt about that.  But there are some questions about whether the factors that propelled them to their most successful week of the season are sustainable.  It makes for an interesting week coming up with another pair of road games – at Buffalo and at Philadelphia – on the schedule.  For the first time in a while, the Caps will face a week in which all of their opponents are below them in the standings (the New York Islanders being the third team on the schedule).  Buckle up.