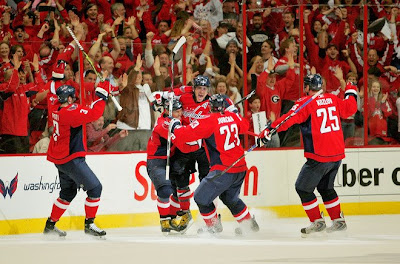 Alex Ovechkin
Theme: “A gem is not polished without rubbing, nor a man perfected without trials”

So, a Chinese proverb applied to a Russian playing in a North American hockey league. Well, hockey is a global sport. But the point here is that Alex Ovechkin, despite having what for mere mortals would be a career year, slipped a notch this year, both in numbers and perception, and might very well see his nemesis – Sidney Crosby – skate around the ice with the Stanley Cup secure in his embrace before next week is out. Let’s compare last year to this… 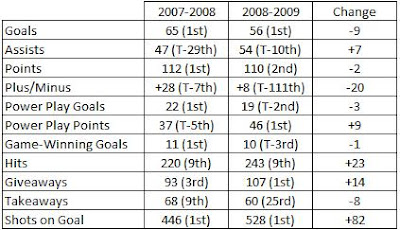 Ovechkin played in three fewer games this year, but Alex Ovechkin was, and remains, the most dynamic force in the National Hockey League – over 130 feet of ice. From his own blue line to the opponent’s end boards, he is a threat every time he touches the puck, whether it is taking the puck at his own line and rushing up ice with a defenseman desperately trying to figure out what to do, or if it is his one timer from the left wing circle beating a goaltender before he can get across the crease, Ovechkin is the best in hockey. He was perhaps the most consistently productive offensive force in the game, as evidenced by his ten-game segments…

There are two sets of numbers from the regular season that are a bit disturbing. First, there is the matter of Ovechkin going minus-7 over his last 21 games, despite his also going 12-19-31. How does such a thing happen? Well, he did earn almost half of those points on the power play (5-9-14) -- no plusses there. But one couldn’t help but think there was “coasting” aspect to his game, too. 13 of those last 21 games were played against familiar foes – teams in the Southeast Division. In those games, he was 6-14-20, but he was also a minus-7.

Then there is the matter of his turnover ratio. His giveaway total was higher this year than last, and his takeaway total was lower. Expressed as a ratio of takeaways to giveaways, Ovechkin dropped from 0.73 to 0.56. Ovechkin plays something of a high-risk game on offense and much of that offense goes through him, but that’s a rather precipitous increase in his generosity with the puck.

Let’s be clear here, we are not talking about a standard against which the average hockey player is compared. It is the high bar Ovechkin has set by virtue of his performance over his first three years. And in many ways, he topped that bar…

- Of the 16 opponents against which he played at least two games, he had points against 15 of them (he, and the other Caps, came up short against Columbus). Perhaps more remarkable – and another expression of his consistency – he had goals against 15 of those teams.

- The day of the week didn’t seem to matter in terms of his scoring: 19 points on Tuesdays, 19 points on Wednesdays, 18 on Thursdays, 13 on Fridays, 21 on Saturdays, 15 on Sundays. Like most of us, Mondays didn’t set well with him; he had “only” five points in five Monday contests.

- Against the other seven playoff teams in the East, Ovechkin played in 36 games and went 18-24-42, +7. He had no fewer than two goals or four points against any of those clubs, averaging at least a point a game against all of them.

Drilling further into his numbers, Ovechkin was second on the team among forwards (50 games, minimum) in 5-on-5 points scored per 60 minutes of play. He was, however, slightly below last year’s number (2.86 vs. 3.00). Ditto for goals – his 1.57 goals per 60 minutes of 5-on-5 ice time was second on the team, but slightly below his number for last year (1.68). His Corsi rating, however, was much better this year (19.0 versus 13.0). However, he saw his goals scored against per 60 minutes of 5-on-5 ice time increase dramatically, from 2.56 to 2.91. Since the comparable goals scored figure did not change much (down from 3.79 to 3.72), his goal differential per 60 minutes of 5-on-5 dropped from +1.23 to +0.81. Of course, such things are relative – many players in the NHL (not to mention coaches) would kill for players averaging almost a goal more scored than allowed per 60 minutes at 5-on-5. Nevertheless, as we said, the bar that Ovechkin has set for himself is high indeed.

But drilling down uncovers another odd number. Let’s consider what we might call “elite” forwards. For purposes of this comparison, we’ll select 10 from that group that would include Evgeni Malkin, Jarome Iginla, Joe Thornton, Eric Staal, Henrik Zetterberg, Zach Perise, Marian Hossa, Patrick Kane, Sidney Crosby, and Pavel Datsyuk. In terms of the ratio of penalties drawn to penalties taken at 5-on-5, Ovechkin’s ration of 1.24 is worse than any of those ten players: 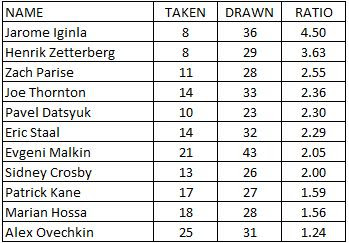 Part of that might be style (Ovechkin is the biggest hitter of that bunch, one who initiates contact) or position (centers seem to dominate this list), but Ovechkin would only be fifth on this list in terms of drawing penalties, too. Caps fans will argue here that this is evidence of Ovechkin not getting his share of calls.

Although there were the fun moments -- the skills competiton in the All-Star Game when he hammed it up with the aid of Evgeni Malkin comes to mind -- Ovechkin had, even for an elite player, some difficulties this year. The passing of his grandfather early in the season no doubt weighed on him some. He had his longest career goal-less streak – nine games – as his grandfather’s condition worsened (he returned to Russia to be with him in the midst of this streak and missed two games). There was the sniping of Don Cherry and his ilk over goal celebrations, whispers of Ovechkin being something of a “cherry-picker,” and what some felt was an early playoff exit despite his netting 11 goals in 14 games to go with a plus-10 (8-6-14, plus-5 in the seven game Pittsburgh series). It was Sidney Crosby that advanced out of that second round, not Ovechkin, which undoubtedly will lead many – including the entire Canadian media contingent, we’re thinking – that Crosby has supplanted Ovechkin as the best hockey player on the planet (ok, there will be those Malkin fans, too).

The gripes are nit-picking, to a point. Ovechkin is the most compelling force in hockey, on and off the ice. But he hasn’t led his team (yet) any further than 17 of the other 19 playoff teams in Capitals history. And he does have work to do in terms of becoming a two-way player, or at least enough of one so that teammates can follow his lead (ok, yes…like that guy in Pittsburgh).

Next year will be a telling year in the career of Alex Ovechkin. He will be 24 years old when the season ends. That’s barely getting started in most walks of life, but looking at the greats – Gretzky won his first Cup at age 23, Mario Lemieux at 25, Maurice Richard at 22, Bobby Orr at 21, Gordie Howe at 21. The window is open for Ovechkin to join those greats, and to be mentioned in the same breath as them, he will have to have his name engraved on the same piece of hardware. It’s not all on Ovechkin; a team has to be built around him, just as it has been done in Pittsburgh around Sidney Crosby (age 21), and that is a job for the folks in the front office. But for this year, Ovechkin showed once more that he is elite among the elite in the NHL… but not without flaws that need to be polished and trials that had to be endured.