The Most Feared Man in the Game

Well, it’s been a few days since “The Shove.” It seems everyone with a keyboard in North America has weighed in on the matter of Alex Ovechkin’s five seconds of mayhem inflicted on Brian Campbell last Sunday, and there have been a lot of different angles…

“Is Ovechkin a dirty player?”

“Was it even a penalty?”

“Should he have been suspended?”

“Was the suspension long enough?

Then there is the “secondary market” of opinions that look at whether this latest instance of Ovechkin’s peculiar style of play is as much a threat to his own longevity as that of the players he is hitting all over the ice. The latest of these came in the form of a column by Mike Wise in this morning’s Washington Post, and while we have an issue with Wise conflating the issues of “Is the most potent force in the game also the most reckless and dangerous?” and “Is Ovie dirty?” (one question literally following the question mark of the other), we think Wise’s attention to the comments of Mike Knuble are a reasonable basis for a conversation. Wise quoted Knuble…


"There was something in the corner with maybe five minutes left. Alex kind of went at a guy. [The score] was 6-1. I was kind of like, 'Slow down a bit.' Just for your own sake. You don't need to accidentally catch your knee on somebody. There are some times, when as a player, you can save yourself a little bit."

The quote made us think of a player who was once referred to as "The Most Feared Man in the Game.” He doesn’t come from hockey, but from professional football 40 years ago. Dick Butkus arrived in Chicago from the University of Illinois already possessing the reputation as perhaps the best player at his position ever to come out of college football, not a too distant parallel to Ovechkin being the best player in his draft class in 2004 and perhaps the best amateur player of the past 20 years coming into the NHL. 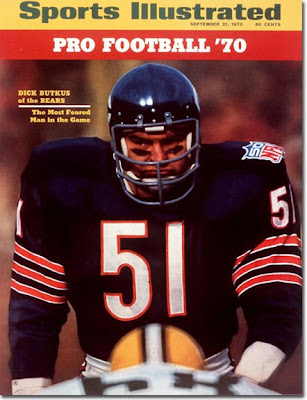 Butkus quickly earned a reputation for the big hit, the highlight tackle, the play that would bring fans out of their seats and threaten bodily damage to the subject of his attention. He consistently led his team in tackles and fumbles forced, testimony to his ability to inflict damage on opposing ball carriers regularly and consistently. But his style was one that didn’t allow for modulating his behavior. He was always running at 100 percent. The Pro Football Hall of Fame biography of Butkus describes a player that resembles Ovechkin…


“Dick had drive, meanness, a consuming desire to pursue, tackle, and manhandle – anything he could do to thwart the enemy on every play. Still he was a clean player, totally devoted to his career, a man who by his own admission played every game as though it were his last one.”

That drive and consuming desire came at a price. Butkus survived only nine years in the NFL, leaving the game at the age of 31 after sustaining a number of injuries over the years.

We can’t know what goes through the mind of an elite athlete, whether a player such as Butkus – or Ovechkin – has the wherewithal to find a way to pick their spots for the game-changing hit. Perhaps Ovechkin has to play the way he does to be as effective as he is. Butkus seemed to feel that way and even manufactured anger to help ramp up his focus. Again, from his Pro Football Hall of Fame biography…


“When I went out on the field to warm up, I would manufacture things to make me mad…If someone on the other team was laughing, I'd pretend he was laughing at me or the Bears. It always worked for me."

Sports fans are greedy. They want to have their star making the big play every game – every down, every inning, every minute, every shift. But they also want them around for years and years. Ovechkin has certainly tried to live up to his bargain with respect to the former. He never gives the impression of taking a shift off, and he is always locked in on the next target – the next goal, the next hit. There is no passing up an opportunity in his style to date; there is no “pacing himself.” Pro football and NHL hockey are different games, and Ovechkin doesn't give the impression of possessing the same raw meanness that characterized Butkus' game.  But Butkus and Ovechkin share this trait -- so far, Oveckin has played as if every shift is the last one of a playoff game.

Perhaps Ovechkin will, as he ages, find a way to modulate his game without sacrificing his effectiveness. Perhaps he will never find a way and somehow escape being on the wrong side of a hit. We can’t know which way is best; we have no station to prescribe what Ovechkin should or should not do.

As fans, we can only hold our breath, enjoy him… and however this turns out, hope he doesn’t turn into Dick Butkus.
Posted by The Peerless at 6:51 AM 3 comments: