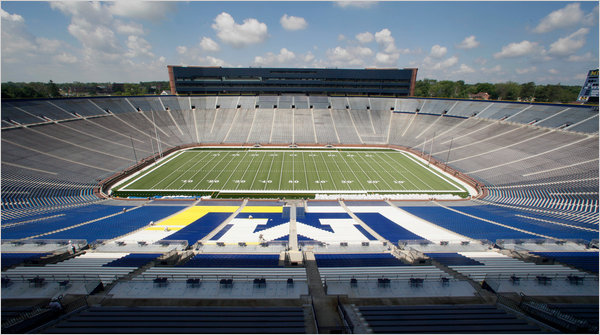 “Observe due measure, for right timing is in all things the most important factor.”
-- Hesiod

Michigan Stadium – “The Big House” – is an enormous arena.  When filled on a Saturday afternoon for a football game, it takes on a life of its own.  It pulses with fans coming out of their seats as a big play unfolds.  It takes on the bright colors of maize-and-blue clad fans cheering for the team representing the University of Michigan.  But most of all, there is the sound.  When more than 100,000 voices cheer as one, the Big House opens to the sky in a full-throated roar that might be heard all the way to Canada.

And when The Big House stands empty, the silence is just as profound.

On January 1, 2013, The Big House should have been filled with fans in Red Wings red and Maple Leaf blue cheering the teams as they skated in the climax of what promised to be, as Red Wings goalie Jimmy Howard put it on Friday, “the granddaddy of the Winter Classics.”  A festival that would have bridged the 45 miles from Detroit to Ann Arbor would have provided fans with as much hockey as you could fit into a fortnight.  From December 15th through New Year’s Day, amateur hockey games (including an Ontario Hockey League doubleheader), free skates, the Great Lakes Invitational tournament featuring four college teams, an American Hockey League game featuring the affiliates of the Wings and Leafs, not one, but two alumni games because so many alumni of the teams wanted to be a part of this.  Then there were the outings, signing sessions, exhibits, and other events surrounding the festival.

Yesterday, the National Hockey League cancelled the 2013 Winter Classic.  It, and the Winter Festival accompanying it, will be played and held eventually (no dates have been set, a nod to the fact there is still no new labor deal in place).  Many of the games and events have been rescheduled and relocated, the Great Lakes Invitational, for example, to be played at its traditional venue – Joe Louis Arena – instead of on a rink at Comerica Park.  The Ontario Hockey League and AHL games will be moved to indoor venues.

It would have been spectacular, though.  It would have turbocharged the momentum the league has had since coming out of its last lockout in 2005.  But on the eve of what would have been an event that in some ways might have eclipsed even the Stanley Cup tournament as a means to show sports fans all that makes hockey great, the league pulled the plug to make this celebration the latest casualty in the ongoing stalemate with the players association over a new labor agreement.

The National Hockey League has nothing if not a ghastly sense of timing.  In 1994 the New York Rangers ended a 54-year drought without a Stanley Cup by winning a seven-game final against the Vancouver Canucks.  Led by Mark Messier – a player whose picture appears under the definition of “leader” in the dictionary – the Rangers captivated New York City, but they also served to propel hockey to the forefront of American sports in the spring.  Long a niche sport confined to winter climates, the Rangers had the talent and the moxie to win over casual sports fans to hockey.  It was an opportunity for the NHL to take an equal place among the major team sports in North America.

And how did the league take advantage of the opportunity?  The league and the players could not come to any agreement on a new labor deal, and the players were locked out to start the following season.  Instead of building on the momentum of the Rangers’ exciting spring of 1994, the NHL lost 468 games – almost half of the 1994-1995 season – to the lockout.  A season that should have started in October did not start until January 20, 1995.  San Jose lost an all-star game (they would host another in 1997).

It had all the looks of a lost opportunity.  It was a case of self-inflicted misfortune.  It was ghastly timing.

And here we are again.  Hockey in Hockeytown.  Hockey in the largest venue for the sport on the planet.  From dawn ‘til dusk – and after – in the Holiday season hockey fans could eat, breathe, and live the sport.  Fans not familiar with the sport could make their acquaintance and get to know what it is about hockey that makes its fans as rabid and devoted as they are to the sport.  Two cities hurting in an uncertain economy could have life breathed into their communities.

The games will be played…elsewhere.  The events will be held…eventually.  Maybe on New Year’s Day 2014, maybe not.  But will those games and those events have the same unbridled joy attached to them, whenever they are held, after enduring the frustration and the ill-will that hangs heavily over the lingering labor dispute?

In the end what we are left with is The Big House at the corner of South Main Street and Stadium Boulevard in Ann Arbor.  On New Year’s Day it will stand open to the sky, empty.

A silent scream at an opportunity lost.
Posted by The Peerless at 8:23 AM No comments: 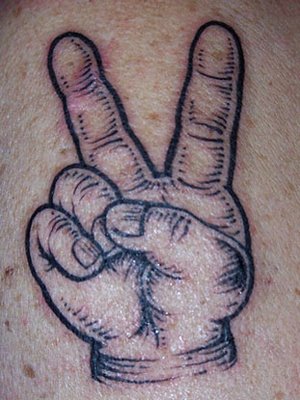 There was no rest for the Capitals.  Hard on the heels of their thrilling come-from-behind overtime win over the Pittsburgh Penguins on Wednesday, the Caps played host to the team they defeated in the 2012 Eastern Conference Quarterfinals of the Stanley Cup tournament – the Boston Bruins – on Friday.

The Caps did catch a break in that the Bruins were playing the second half of a road back-to-back set, their first back-to-back of the season, having played in Toronto on Thursday night.  The Caps got another break when Bruins head coach Claude Julien decided not to start goalie Tuukka Rask on consecutive nights, giving the nod to rookie Anton Khudobin in his first start of the young season.

Khudobin might not have had NHL experience, but it was not as if he was not experienced.  The 26-year old entered this season with more than 170 games of AHL regular season and playoff experience, almost 70 games in the ECHL, and more than 20 games with Metallurg Magnitogorsk in Russia.  And even his sparse NHL experience was successful.  He brought a career record into this game of 5-1-0, 1.32, .961, and one shutout earned over small parts of three seasons with the Minnesota Wild and the Bruins.

Khudobin and the Bruins, not to mention the Caps, continued just where they left off in last spring’s opening round playoff series.  Neither team was able to find the back of the net, and the game was played with a zone-to-zone ferocity that belied the fact that this game was being played in November.  The first 20 minutes passed without a good scoring chance for either side.  And while Khudobin was able to keep the net clean for the Bruins, Caps goalie Michal Neuvirth did the same for the Caps.  The Caps led in shots in the first period, 5-4.

The start of the second period was much like the first, neither team able to gain much of a foothold in the other’s defensive zone.  That changed when Nicklas Backstrom took a slashing penalty just before the six-minute mark of the period.  The Caps almost killed the penalty off, but with just 14 seconds left in the penalty kill an attempted clear by John Carlson hit a post between two of the glass partitions at the side wall and ricocheted to Tyler Seguin in the right wing circle.  Seguin backhanded a pass to Patrice Bergeron at the edge of the left wing circle, and Bergeron wristed the puck past Neuvirth to give the Bruins a 1-0 lead at 7:44.

The lead lasted only nine seconds.  After Backstrom won the ensuing faceoff, Carlson sent the puck off the boards and into the Boston end.  Dennis Seidenberg was retreating on the play and tried to sweep the puck onto his stick.  He missed, and his momentum took him away from the puck.  Backstrom pounced on the unforced error and snapped the puck through Khudobin’s five hole to knot the game at a goal apiece.

The Caps would get their own power play opportunity when Milan Lucic was sent off for charging, but the Caps could not solve Khudobin with the man advantage.  Except for some mutual disrespect between Matt Hendricks and Brad Marchand that resulted in coincidental roughing minors late in the period, there was no further excitement before the teams went to their locker rooms at the second intermission tied at a goal apiece.

Rich Peverley broke the tie early in the third period when he was able to get multiple whacks at a loose puck in front of Neuvirth.  Given the way the game was progressing, that goal might have been enough.  But with just under nine minutes left in the third period, Joey Crabb returned the favor by getting several pokes at a loose puck in Khudobin’s crease.  His last poke managed to slide the puck under the goalie for his first goal of the season just as he was getting sent to the ice by Bruin defenseman Andrew Ference.

That was how the 60-minute portion of the game ended, the teams tied at 2-2.  Both goalies kept their nets clear of pucks in the five-minute overtime, and the contest went to the trick shot competition.   Round one featured Tyler Seguin for the Bruins and Mike Ribeiro for the Caps, neither being able to score on Neuvirth or Khudobin.  The second round of Patrice Bergeron and Nicklas Backstrom had the same result.

David Krejci had a chance to put the Bruins up in the final round, but Neuvirth did not bite on an attempt by Kreici to open up the five hole with a deke.  Neuvirth turned away the shot, giving the Caps a chance to clinch with Matt Hendricks skating to center ice.  Hendricks started in, and as he reached the top of the circles opened up his stick blade to show a forehand shot.  Khudobin bit on the fake, dropping to the ice to defend the shot that didn’t come.  He was prone at the top of his crease – paralyzed, as it were – as Hendricks curled to his left and wristed the puck into the open net, giving the Caps a 3-2 win.


Notes:  Mike Green missed the contest with a “lower body injury;” he is still listed as day-to-day… Alex Ovechkin was held without a shot on goal for the first time this season… the goal in the Gimmick round was Hendricks’ 10th career goal; he is 10-for-14 for his career and 9-for-12 in two-plus seasons with the Caps. 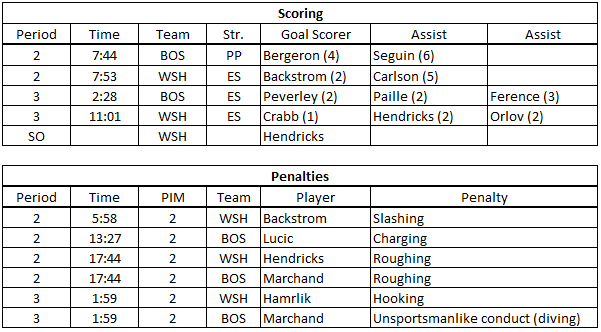 Posted by The Peerless at 7:10 AM No comments: