I don’t know, I wasn’t told
Coach Boudreau could be so cold…

Today, the Caps inaugurated Rookie Camp 2008, or as a few young men are likely to call it this afternoon – Hell Week. Coach Bruce Boudreau and the rest of the Caps coaching staff put tomorrow’s Capitals through a two hour session (broken up for a few minutes by the mesmerizing Zambonification of the ice). It was a day of drills, more drills, a lot of hands-on teaching by Coach Boudreau, and…gassers at the very end of the session.

The first day was reasonably well attended, given that it started on a Sunday morning with a Redskins home game starting at 1:00. And, this being the first day, it was hard to really get a feel for who was up or who was down. One nice thing was that the club invested in Velcro and name plates, so fans could associate a name with a colored jersey. Here, you can clearly see John Carlson and Mathieu Perreault, who is upright (more on that in a bit). Funny...no player had (yet) the name plate "Kick Me." 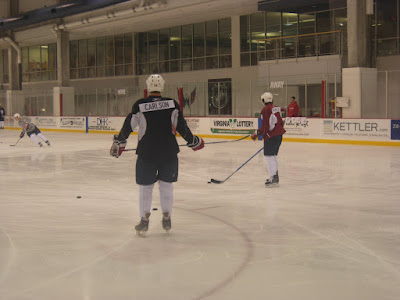 There was also a lot of teaching by Coach Boudreau, who has the chance to impress upon his young lab rats the proper method of Capitals hockey…it involves skating…a lot of it (more on that in a bit, too). 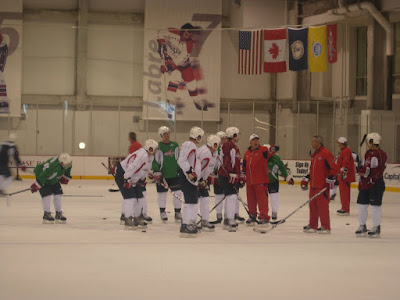 After the drills portion of the session, the squad broke up into units to go through a modified scrimmage-like drill with the goalies getting into the swing of things, having to actually stop pucks. All of that was prelude to the morning’s entertainment (hardly such for the objects of the exercise) – gassers, Herbies, call ‘em what you will…skating goal line to goal line, and back…goal line to far blue line, and back…goal line to red line, and back. This was repeated in its various forms several times for, what was by my watch, almost 25 minutes.

This separated the – well, not the men from the boys, since none of them look to be that familiar with a razor just yet...let’s say the ones who knew what was coming from those who didn’t. Some guys – John Carlson comes to mind – didn’t look too green in the gills as the drill progressed. But the coaching staff might have had an inkling of who would suffer, perhaps giving them the green jerseys for a reason.

It didn’t take long for the hot-shot top draft picks to find out that for the moment, they are merely guys with velcroed name plates on their backs. Dmitri Kugryshev and Anton Gustafsson labored mightily in these drills, each employing their own respective desperate techniques to catch a breath while others were having their own hell inflicted upon them. Kugryshev seemed to prefer the “lurch over the goal line and collapse in a heap” method, where he found himself on all fours trying to recover. Gustafsson was more of the we’ll-do-this-in-stages school. One time, he might come back and end up on his knees…the next time sitting on the ice…finally just saying “f*ck it” and ending up flat on his back waiting for celestial angels to spirit him away. Here is the product of what Boudreau did to these poor young men… 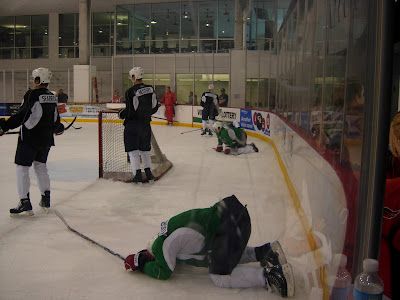 What you don’t see is Matthieu Perreault, who quite literally had to be helped off the ice in the midst of this death skate (let’s be honest here, kids…I’d have lasted maybe to the red line -- once – and keeled over in a puddle of sweaty goo). We did not take notice of an injury, his case being perhaps one of intense "where the $#@& am I?"

After the session ended, Coach Woods was seen under the stands and was asked about the boys. He noted that some of the guys perhaps didn’t know what to expect, hadn’t been here before…he was asked if Perreault was going to live. He just sort of rolled his eyes and muttered, “I dunno.”

This…was Day One. Enjoy your stay, gentlemen.
Posted by The Peerless at 2:38 PM 4 comments: