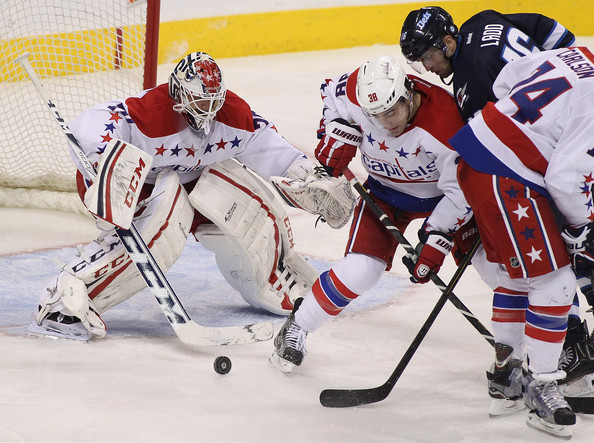 We’ve reached Game 3 in our look back at games that mattered for the Washington Capitals in the 2013 season.  This one – two actually – propelled the Caps into the race for the Southeast Division lead…

The Background:  The Caps righted the ship when they beat the Devils back on February 23rd, but they had yet to make much progress in climbing the standings in the games that followed.  They were 6-6-0 in the dozen games played after they beat the Devils back in late February.  Worse, they had just embarked on a four-game road trip that would take them to Pittsburgh to face the Penguins, to Winnipeg for a pair of games on consecutive nights against the Jets, and then to New York to visit the Rangers.

The Caps did not get off to a good start on that road trip, dropping the first game in the trip to the Pittsburgh Penguins by a 2-1 margin.  It was a moral victory of sorts, since the Caps had already lost twice to the Penguins back in early February by a combined 11-4 margin.  Still, with the Caps sitting in 14th place in the East, nine points behind the Jets for first in the Southeast Division and five points behind Carolina for eighth place in the Eastern Conference, time was starting to get scarce, and the Caps needed to make a move.

Why it mattered: The Caps already split two games with the Jets, losing a 4-2 decision in Washington’s home opener, then beating the Jets at MTS Centre on March 2nd by a 3-0 score.  They also happened to be on a see-saw with their schedule, alternating wins and losses over their previous five games (2-3-0).  The Jets were on a bit of a roll, going 6-1-1 since dropping their first two decisions in March.

It was the Caps who looked like the team on a roll and the Jets like the one treading water in the first game of the set.  Part of it was getting Mike Green back in the lineup.  Green missed 10 games with a(nother) groin injury.  He would not get a point in this game, but his minutes would allow John Carlson to bear less of an ice time burden.  In the ten games Green missed, Carlson averaged almost 26 minutes of ice time a game.  In this one Carlson would finish with 23:23.  The recalibrating of ice time seemed to work for the defense; they would hold Winnipeg to just 20 shots on goal for the game, the fewest the Caps would allow an opponent all season.

And, while Braden Holtby was stopping all 20 of those shots on goal, the Caps were being very efficient at the other end.  Troy Brouwer got the Caps off and running just 3:06 into the game on the Caps’ second shot on goal. It was all Brouwer, who blocked a pass attempt by Grant Clitsome outside the Caps’ blue line, skated down the right side and fished the puck out of the corner, dropped a pass for Brooks Laich, took a return pass, backed out from the opposite corner and wristed the puck past goalie Ondrej Pavelec.

Brouwer’s effort was typical of the Caps’ performance in Game 1 of the two-game set.  Late in the period it was Marcus Johansson bumped off the puck by Mark Stuart in the neutral zone.  But Johansson kept after it, heading into the Jets’ end to apply the forecheck on Dustin Byfuglien.  A pass from Byfuglien to Evander Kane eluded the recipient, and Alex Ovechkin picked it up.  As he was doing so, Johansson circled out from behind the net and was in perfect position to redirect a centering pass from Ovechkin to make it 2-0 at the first intermission.

The Caps clamped down after that, and when Ovechkin scored a power play goal with less than six minutes left, followed by a Nicklas Backstrom goal with 1:38 left, the Caps had their second straight shutout of the Jets at MTS Centre.

Game 2 started in much the same fashion for the Caps, who scored twice in the first period.  Laich and Brouwer, who combined on the first Caps goal in Game 1 had one apiece in the first 20 minutes in this contest.  Laich outdueled Dustin Byfuglien for a loose puck along the wall, then beat him to a spot in the left wing circle to score from one knee on a pass by Mike Ribeiro.  For Brouwer it was another three-zone effort that started when he chipped the puck, not once, but twice off Winnipeg sticks to get it into the neutral zone.  He collected the puck on the run and skated it to the Jet’s blue line where he slid it over to Mike Ribeiro.  Brouwer one-timed the return pass into the back of the Winnipeg net, and the Caps had another two-goal lead at the first intermission.

The Caps added a pair in the middle frame, one on a Jay Beagle one-timer from the edge of the right wing circle, the other on a wrister from Alex Ovechkin less than two minutes later.  And if that did not end the competitive portion of the evening, a goal by Mike Green just 1:51 into the third period did.  Dustin Byfuglien ended Braden Holtby’s shutout streak of 190:37 against the Jets when he made it 5-1, but Ovechkin got that one back with a power play goal with 4:02 left to seal the 6-1 win and the sweep at MTS Centre.

The Takeaway:  Everything went right for the Caps in the two-game set.  They outscored the Jets, 10-1.  They were 2-for-7 on the power play, while they killed off all eight shorthanded situations they faced.  Seven different players recorded goals, and 14 skaters had at least one point (the Caps had 14 skaters with a point in Game 2).  They led for 104:44 of the 120 minutes and never trailed.  Braden Holtby stopped 50 of 51 shots on goal (.980 save percentage).

The Caps got production from its top line.  Alex Ovechkin was 3-2-5, Marcus Johansson was 1-3-4, and Nicklas Backstrom was 1-2-3.  They got production from the grinders with Jay Beagle, Matt Hendricks, and Joel Ward picking up points.  Mike Green had a goal, and John Carlson had a pair of assists from the blue line.  In fact, five different defensemen had points in the two-game set with Karl Alzner, Steve Oleksy, and Dmitry Orlov contributing.

This was about as good as it gets in an early-spring series in Manitoba.

By the time the two-game set ended, the Caps climbed to 10th in the Eastern Conference, just three points behind the New York Rangers for eighth place and only five behind the Jets for the Southeast Division lead.  It could have been a road trip that killed their season, and when the Caps lost in Pittsburgh to start the trip it looked as if that might happen.  But they dominated the Jets in two games, starting the Jets on a slide that saw them finish the season 8-7-1 and out of the playoffs.

For the Caps it turned their season from being one of waiting on the end of the regular season to start their summer early to one of having a realistic chance of making the playoffs.  But to build on that and to make the road trip a success, they still had one more stop to make, a game in New York where the Caps would complete a successful road trip with a 3-2 Gimmick win.  In the meantime, a two-game trip to Winnipeg and the sweep that resulted made these games that mattered in the 2013 season.

A Day at the Office

The alarm clock goes off.  You have a runny nose and a bit of a cough.  You’re coming down with something.  You stand over your coffee maker as it bubbles wondering, “should I call in sick today?”  After all, those meetings you have on your schedule and phone calls you have to return at the office are quite demanding.  Finally, you decide to drag yourself into the office, even if you don’t quite feel up to it today.

You have broken ribs.  Torn cartilage and muscles.  A separated shoulder.  The last time you were at the “office,” you left in an ambulance.  But you showed up for work the next day.  And unlike that office worker debating with himself over his coffee maker (among which we include ourselves), you work for a living.  Your body is your tool set.  And it’s broken.  When asked to describe the nature of your injuries, whether they are, in the code of your profession, “upper body” or “lower body,” your boss merely says, “body.”

You are skating a shift in the late stages of the first period.  You just turned the puck over, but you jump back into the play to try to defend your mistake.  A shot caroms off your stick and hits you square in the cheek, frozen rubber striking skin, flesh and bone.  It rips a streak of red across your face, leaving you face down bleeding onto the ice.  It is your last shift of the period, because it takes time to stitch up a cut.  You are back on the ice for your first shift of the next period, still feisty enough to take a penalty to end that shift.

Your job description includes some items that jeopardize your physical well-being.  Going into places inhabited by large men with malice on their minds is among them.  But to succeed, there is where you have to go sometimes.  One of those times, you are plastered to the ice trying to do your job, left woozy and uncertain on your feet.  It’s all in the job description, the risk you take.  But you’re back at work the next day, and the next time you show up at the office, it’s your goal that blunts the momentum of the other team, at least for a while.  When your team finally takes control of the game, you are on the ice in the last minute to defend your lead, to defend the championship you are about to win.

The term “heroes” might best be reserved for those who toil on the field of battle, but there really are not very good synonyms for the term.  Leave to say that Patrice Bergeron, Andrew Shaw, and Jonathan Toews are special.

Then again, perhaps not.  They are hockey players, and this is what hockey players do.  They just did it on the biggest stage of all in their profession.  And that is one reason why hockey fans might be the most rabid of any sport (well, there are those World Cup soccer fans…).  Because hockey players are, if not heroes, then very special individuals.  It puts in stark relief how stupid, silly, and petty all the nonsense was that left the NHL dark for four months.  And how much smaller those were who brought it about.

The game of hockey is in good hands with young men like Bergeron, Shaw, and Toews – and dozens like them.  They, and the game, deserve celebration this morning.