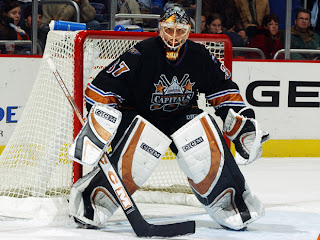 Yesterday there was some chatter on Twitter about the performance of Capitals’ goaltender Tomas Vokoun and his having started six games in a row, not having allowed more than two goals in any of them in compiling a 5-1-0 record. Comparisons were drawn to former Caps goalie Olaf Kolzig and a similar performance in his Vezina Trophy-winning year of 1999-2000 in which he also started six consecutive games (February 26-March 7, 2000) and allowed two or fewer goals in all of them.

Y2K did not seem to present a problem for Kolzig that season.

Tomas Vokoun is the best goaltender the Caps have had since Kolzig, certainly. But if Vokoun is going to match that 1990-2000 season, he has quite a way to go. Those 43 games are perhaps the best sustained exhibition of goaltending in the history of the franchise.
Posted by The Peerless at 8:42 AM No comments:

Picture...thousand words.
Posted by The Peerless at 7:51 AM 6 comments: