OK...so let me get this straight 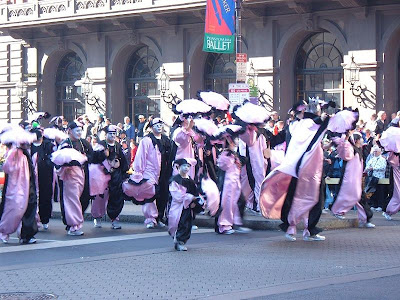 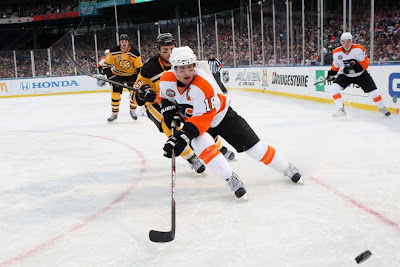 ...in television ratings in Philadelphia.

This isn't about Philly, the Mummers are a big deal there (the Mummers also beat the Tournament of Roses Parade in ratings). This is about NBC...

Nice call, guys.
Posted by The Peerless at 10:31 AM No comments:

The Caps return home this evening for a contest with the Montreal Canadiens. A home game has been a rare occurence for the Caps, their having skated on home ice only five times since Thanksgiving.

Listen, Frenchy, let me ask you something. Do you like good food?

"Oh, but of course. Uh, the French love good food."

Well, then, I guess that would make you an "Eatie Gourmet."

You know, I really shouldn't kid Frenchy...because sometimes he "Stan Getz" mad at me, and he could "Al Hirt" me.

"Well, uh, I love a good happy ending for ze Caps as much as the next man."

Well, Frenchy, it isn’t any funnier now than it was when you did that schtick in the movie, but we are a sucker for a happy ending, even if "happy" is not the sort of ending the Caps have had lately. The Caps are losers of their last three games in regulation, which hasn’t happened in more than two years. They will look to keep that number from growing to four in a row when they host the Montreal Canadiens, winners of six of their last eight games coming into this contest.

The Habs have been hanging at the periphery of the playoff mix for a while now, a product of a good – if not great – December in which they went 9-7-1. The Canadiens might be forgiven for such a finish to the year, given that they played in four back-to-back contests during the month, and five times they played three games in four nights (including a four-in-six nights run in the middle of the month). They’ve been busy. Overall, their numbers shake out like this… 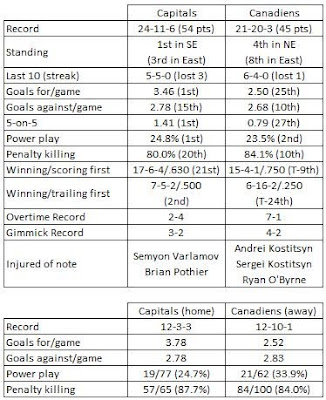 What the Canadiens have been doing right is converting on the power play. Leading the league in power play conversions is not new to Montreal, in that they led the league in both the 2006-2007 and 2007-2008 seasons (slipping to 13th last year). At the moment they are the only team standing between the Caps and the top spot in that measure (24.8 percent to 23.5 percent).

And it really was about the power play in December. Of the 48 goals the Canadiens scored in the month, 18 were the result of power plays. They were 18-for-47 for the month – 38.3 percent. After going 0-for-6 in their first three games of the month, they sizzled at 43.9 percent in the last 14 games of December.

They do spread it around, too. Three players for Montreal have at least five power play goals on the season – a defenseman, a center, and a winger. Marc-Andre Bergeron leads the Canadien blueliners in scoring (10-22-32), and he is tied for the team lead in power play goals with six. 15 of his 32 points have come on the power play.

Andrei Kostitsyn will be absent on the wing for this game, and his five power play goals will be missed, but an old friend to Caps fans could pick up the slack. Glen Metropolit is tied for the team lead in power play goals with Bergeron (six), and eight of his 20 points overall have been scored while on the man advantage. It is putting Metropolit on a pace for the highest scoring season of his career. His pace of 20-20-40 would eclipse his 2007-2008 season with Boston (11-22-33).

But what seems to feed it all is the play of Tomas Plekanec. The center leads the team in overall scoring (10-36-46) and is the straw that stirs the drink on the power play, having recorded 17 assists on the man advantage (1-17-18). He has been a royal pain in the backside for the Caps, too, going 8-9-17 in his last 14 games against the Caps.

The Canadiens seem not to have settled on a number one goaltender, as Jaroslav Halak has been pushing Carey Price all season for the responsibility. Halak’s numbers are not that much better than Price’s. In GAA they are virtually identical (2.64 for Halak to 2.62 for Price), as is their save percentage (.922 for Halak to .916 for Price). What Halak has done that Price hasn’t is win (11-6-0 versus 10-14-3 for Price). Halak comes into this game as the hot goalie for Montreal, 6-2-0 in his last eight decisions with a 2.24 GAA and .944 save percentage. Of note is the fact that he’s faced a ton of shots – an average of just over 40 shots per game in his last eight appearances.

Price, though, has gotten the call in each of the previous two meetings of the club this season, going 1-0-1, 2.40, .912 in the process. The strange part of his record against the Caps is that in four decisions, he has only one win. But he has yet to lose in regulation to the Caps, losing on three occasions in extra time.

Markov has played in 29 career games against the Caps. He has yet to record a goal. There is no team against which he has played this often and failed to do so. Since coming back from having a tendon in his ankle lacerated, he is 3-8-11 in eight games. And, in keeping with the theme, he is 3-3-6 on the power play in those games. He had a seven-game scoring streak broken in the Canadiens’ last time out, a 1-0 loss to the Buffalo Sabres.

Poti leads the Caps in shorthanded ice time per game by a fairly wide margin (3:27/game to 2:59 for David Steckel and 2:34 for the next defenseman in line, Jeff Schultz). Given how hot the Canadiens’ power play has been, he’s going to have a bulls-eye on him whenever the Caps are a man short.

1. Irresistible force, meet immovable object. While the Montreal power play is the most efficient in the NHL, it might not be the most effective one. Why? Well, no team in the NHL has had fewer power play opportunities than the Canadiens (124, compared to 162 for the 13th-ranked Caps). On the other hand, the Canadiens have converted a whopping 33.9 percent of their road advantages, by far best in the league. The Caps have allowed the fifth fewest man advantages in the league this year at home, averaging 3.6-per-game, and the third fewest power play goals overall (eight). That is largely a function of the Caps having played fewer home games than any team in the league, but this is still the game within a game that bears watching.

3. Familiar surroundings? Since Thanksgiving the Caps have played only five games (of 16 total) at home. Will the Caps settle in and feel comfortable in their new/familiar surroundings the first time back after a long trip west and after spending so much time away from the friendly confines of Verizon Center? The Caps are, after all, the East’s best home team, winning percentage-wise.

In the end, this game is likely to turn on how many opportunities the Canadiens get on the power play. Hold them to four or fewer, and the huge advantage the Caps have in 5-on-5 play (a difference of almost two-thirds of a goal per game) is magnified. That’s where the game will be won…