The Peerless Prognosticator is ON THE AIR!!! -- Game 24: Capitals at Flyers, March 7

The Washington Capitals wrap up their five-game road trip with a visit to CoreStates/First Union/Wachovia/Wells Fargo/(insert name of large corporate financial institution here) Center in Philadelphia to face the Flyers in a 7:00 pm Sunday night start.  The Caps had a six-game points streak (5-0-1) broken on Friday night in Boston against the Bruins, while the Flyers went into their Saturday afternoon game against the Pittsburgh Penguins as winners of four in five games.

The Flyers head into this contest as one of the more formidable offensive teams in the league.  Their 3.35 goals per game rank fourth in the league and first in the East Division.  That offense is led by James van Riemsdyk, who is having a renaissance in his second career tour as a Flyer.  Van Riemsdyk was taken by the Flyers as the second overall pick of the 2007 Entry Draft, right after the Chicago Blackhawks took Patrick Kane with the top overall pick.  In three seasons with the Flyers, ending in 2011-2012, van Riemsdyk was a productive, if not elite offensive player, posting a scoring line of 47-52-99, plus-13, in 196 games.  But in the third of those three seasons he was just 11-13-24, minus-1, in 43 games, his losing chunks of the season to lower and upper body injuries, a concussion, and a foot injury.  He was traded to Toronto in June 2012 for defenseman Luke Schenn.

There is one player in the league with a plus-minus of plus-9 or better and who has one or fewer points.  That would be the Flyers’ Justin Braun.  The defenseman is 0-1-1, plus-9, in 17 games this season.  The odd part of those statistics is the Braun was barely noticeable on the score sheet over his first dozen games, going 0-0-0, plus-1.  But starting with the Flyers’ 7-4 win in Washington over the Caps on February, 7th, he is 0-1-1, plus-8, in five games.

Braun is no youngster.  The 34-year old was taken in the seventh round of the 2007 Entry Draft by San Jose, but despite his being taken with the 201st overall pick, he is tied for 16th in his draft class in NHL games played (686, pending Saturday’s results, with ex-Capital Karl Alzner).  He has never been much of a producer in the offensive end, never posting more than five goals in a season (2017-2018 with the Sharks) and only once topping 30 points (33 in the same season).  Since 2011-2012, when he played full time for the Sharks, through last season Braun is one of three defensemen in the league to have posted nine consecutive seasons of playing at least 40 games, scoring five or fewer goals, and posting 35 or fewer points (Ron Hainsey and Roman Polak are the others).  But despite his lack of offensive production, Braun averaged almost 20 minutes per game over those nine seasons (19:47).  In 17 career games against Washington, he is 0-4-4, plus-4.

Well, is he or isn’t he?  Franchise goalie, that is.  Carter Hart is, for better or worse, who the Flyers have pinned their hopes on to keep their net clean of puck this season and, they hope, deep into the playoffs.  The only problem with that is that Hart has been wildly inconsistent.  In 13 appearances this season, he has four games with a save percentage over .935, and in four games he has a save percentage under .820.  Only twice in those 13 games has he posted a save percentage over .900, and not at all over his last six games, over which he is 2-2-2, 3.66, .885.  But in a bow to his inconsistency, he recorded his only shutout this season in that six-game stretch, stopping all 28 shots he faced in a 3-0 win in Buffalo over the Sabres on February 28th.  Has his problem been Hart trouble or something larger?  It is not an easy question to answer?  What seems evident, at least from this analysis, is that Hart has not come up with the big save when the team needs it. Or put another way, as The Atlantic puts it, “Top-tier goalies are expected to make top-tier saves.” Hart is 2-1-1, 2.71, .911 in four career games against the Capitals. 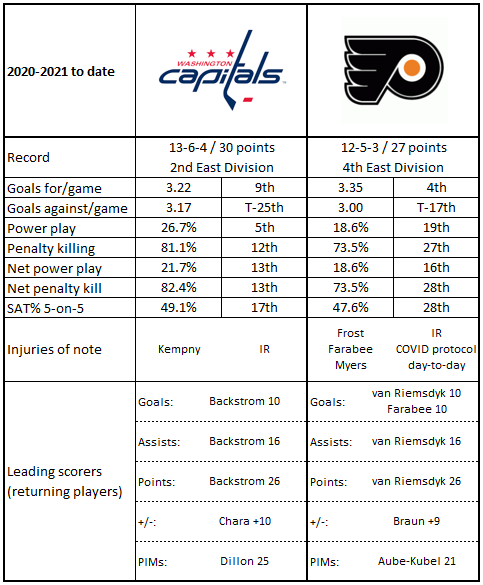 2.  Only Arizona has recorded fewer shots per game (26.3) than Philadelphia (27.3), while at the other end, only four teams have allowed more shots on goal per game than the Flyers (31.7).  Their shots on goal differential (minus-4.0 per game) is second-worst in the league (Arizona: minus-4.3).

3.  Philadelphia has played five extra time games this season.  They have yet to allow a goal at 3-on-3 (one of seven teams not yet doing so).  Two of the five games were scoreless in overtime (the Flyers lost both in Gimmicks), they won twice in overtime, and they lost once in the five-minute extra session on a power play goal in a 4-3 loss to Boston on February 3rd.

5.  Only two teams in the league have a worse net penalty kill, accounting for shorthanded goals scored while killing penalties, than Philadelphia (73.2 percent) – Detroit (66.7 percent) and Florida (62.5 percent).

1.  Washington has the second-worst power play on the road this season (9.7 percent); only Minnesota is worse (8.9 percent).

5.  Forty minutes tell the tale for the Caps on the road so far.  They are 5-0-0 when leading after two periods in road games, 0-3-0 when trailing.

It could not have happened at worse time.  Okay, it could have, like on the first day of the playoffs, but when Joel Farabee was placed on the COVID protocol list on Thursday, he was tied for the team lead in goals (ten), was second in points (19), was third in plus-minus (plus-8), was one of two Flyers playing in ten or more games and averaging a point per game or more (james van Riemsdyk was the other), ranked fifth among forwards in credited hits (17), was tied among all Flyer forwards in takeaways (ten, with Nicolas Aube-Kubel), and was tied for the team lead in shots (50, with Kevin Hayes).  That Farabee would be this productive was not entirely unexpected; he was the 14th overall pick of the 2018 draft, fourth in his draft class in career goals (18),sixth in points (40), and sixth in games played (71).

What is surprising is the level of improvement from last year’s rookie season to this.  Last year, Farabee was 8-13-21, plus-6, in 52 games.  This season, he already passed last year’s goal total (he has ten), his 19 points are within two of last year’s total (21), he already has three power play goals (one last season), had more than doubled his shooting efficiency (from 9.9 to 20.0 percent). What is more, he was on quite a run.  He started the season with  four-point Opening Night (1-3-4 in a 6-3 win over Pittsburgh), but then he went 1-0-1, minus-3 over his next eight games.  Ove his last ten games, though, he was 8-6-14, plus-9, including four multi-point games.  Two of those games were his last two outings before being place on the COVID protocol list.  Farabee was 0-3-3, plus-3, in three career games against the Caps.

We are quite sure Caps defenseman Brenden Dillion is a swell fellow.  What he has not been so far this season is a good house guest, at least insofar as visiting opponents’ arenas are is concerned.  Dillion has 25 penalty minutes in ten road games this season, almost twice as many as the next Capital on the list (Tom Wilson with 14).  It is an odd profile, though.  While Dillon has taken eight penalties (four minors and four majors), a team high in road games, he has drawn three penalties, also a team high in road games.  Dillon is one of four players in the league to have played in at least ten road games, taken more than two penalties per 60 minutes (2.40), and drawn more than one penalty per 60 minutes (1.20); Trent Frederic, Jordan Greenway, and Blake Coleman are the others. Odder still, all 25 penalty minutes recorded by Dillon overall have been on the road.  He has no penalty minutes at home.

His physical play is not necessarily a plus, although big numbers in those areas are signals that the Caps are chasing – not possessing – the puck.  For example, in eight games overall in which Dillon recorded three or more hits, the Caps are 3-3-2.  At the other end, Dillon recorded his first and only goal as a Capital on Opening Night in Buffalo.  He is without one in nine road games since on nine shots (he has one shot on goal in eight of ten road games).  However, he does have points in two of his last four road games (0-2-2) and has seven assists in 23 games overall, a respectable 25-assist pace over a full 82-game season.  Dillon is 0-4-4, plus-5, in 16 career games against the Flyers.

The Caps were mauled in their 5-1 loss to Boston on Friday, costing them the top spot in the East Division, now held by the New York Islanders by tie-breaker.  They were outscored, 4-1, after Brendan Carlo went down after a Tom Wilson hit late in the first period (as of this writing, Wilson has been offered and in-person meeting via Zoom with the Department of Player Safety).  Wilson had a monster game in the Caps’ only meeting with the Flyers to date this season (he was 1-3-4 in the Caps’ 7-4 loss to Philadelphia on February 7th), but he is otherwise 5-5-10 in 29 career games against the Flyers.  It is, however, an opportunity for others to step up in the event he is excused from participation on Sunday.  And stepping up is something the Caps need to do as a group against this team, one that is only three points behind the Caps with three points in hand, pending their game against the Penguins on Saturday afternoon.  Things can change quickly in the East Division these days, and the Caps have to guard against things changing for the worse.

Posted by The Peerless at 1:30 PM No comments: