I like Michael Nylander. I think he's a solid professional on the ice and (he said, biting his lip) equally so off the ice in the midst of this "Whither Nylander" mini-series. I sympathized with his predicament, he being merely a party to a contract who chose to implement rights under that contract to have a say in where he plied his trade. We even had a nice long entry all ready to go pretty much telling those Caps fans who would begrudge Nylander his right to invoke contract language to shut up and deal with it.

But you know? Enough is enough. Beginning last Tuesday, after Nylander cleared waivers, the stories started coming out that a deal with a team in the Kontinental Hockey League in Russia was imminent. Dinamo Minsk... Salavat Yulaev Ufa... "it's a done deal"... "the move is imminent"...

Well, here we are -- five days since the stories started leaking and in the seventh day since he cleared waivers -- and the stories have dried up, the potential landing places aren't being mentioned, and that roster spot still belongs to Number 92.

After the first speculation that a move was on the horizon and the move failed to materialize, other stories emerged that he wanted a provision that would allow him to move to another team and that he was waiting on a potential move to another NHL team.

We just want it to be over. So, as a therapeutic alternative to spewing screed about who is at fault for what in this nightmare, we'll introduce a new feature over there on the right. You'll probably have no trouble finding it.
Posted by The Peerless at 11:26 AM 11 comments:

The Problem With Being The Irresistable Force... and the Moveable Object 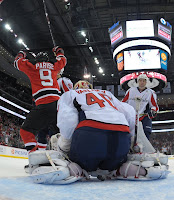 This morning, the Washington Capitals and the New Jersey Devils are tied in standings points in the Eastern Conference. They have virtually identical goal differential numbers for the season – the Caps are plus-12 (not including Gimmicks), the Devils are plus-11.

But the teams have gone about it in very different ways. The Caps have done it with a high-risk/high-reward philosophy. They are averaging 3.65 goals a game, best in the NHL. They have scored four goals or more in 11 of their 20 games played to date. Their record of 9-0-2 in such games makes them, obviously, a reliable winner in high-scoring games. But that also leaves them 3-4-2 in games where they don’t score at least four goals.

Why? Because with that 3.65 goals scored for per game, the Caps are allowing 3.05 goals a game – 24th in the league. Of the six teams ranked below the Caps in goals-per-game allowed, only one – Columbus – is currently among the top eight in either conference, and of the other five teams none is ranked higher than 12th in their conference.

As long as the Caps are scoring, all is well, but when the goals aren’t there, the Caps do not have the defense to be able to win games.

Which brings us to the New Jersey Devils and their plus-11 goal differential. They do it with a “wait until the other team makes a mistake, then pound them for it” approach. They are averaging 2.06 goals allowed per game, best in the NHL. They have allowed two or fewer goals in 13 of their 18 games. Their record in such games is 13-0-0. Let that sink in for a moment. And lest you think that they have a lot of wins among those 13 of the blowout variety, well, in nine of them they scored only two goals themselves (two Gimmick wins) or only three. The Devils are 1-3-0 in which they allow more than two goals (which makes not getting that third one when the Caps had a 2-0 lead last night so unfortunate).

Looking at the two teams and their odd outcomes, the Caps are more likely not to score four or more goals (nine instances) than the Devils are to allow three or more (four instances). There are factors that influence the result – quality of opposition, absence of certain players, etc. – but this just reinforces our view that offense is skill, defense is will. If Jersey plays its game, it is more likely to achieve its “normal” outcome (allowing two or fewer goals) than the Caps would playing their game. There are too many other random events in the execution of mundane plays in hockey that offense will be as constant (watch the tape of the Minnesota game, when the Caps had chances a-plenty in front of the Wild net and couldn’t swat one in).

Of course, it helps to have a Martin Brodeur, and there is only one of those. He plays for the team that doesn’t allow goals. We think the two are related. But that does not excuse the Caps for allowing more than three goals a game (they’ve allowed four or more nine times with a record of 4-2-3). And when the irresistible force meets the immovable object, chances are the immovable object is going to come out on top more times than not.

The Capitals do not need to be the Devils. They do not have a system that will support that style, nor do they have the personnel to play it. They don’t have Brodeur, obviously, but their squad of skaters isn’t constructed for that sort of philosophy, either. However, they have to be better.

Why? In the last dozen seasons, three teams that finished with the best overall goals allowed-per-game rank won the Stanley Cup. No team that led the league in goals scored-per-game won the Cup. Only one team in the last 11 years won the Stanley Cup with a goals allowed-per-game number higher than 3.00. Carolina, with 3.15 in 2006, achieved the feat, and that happened to be the first season after the lockout and the first year of liberalized rules to increase scoring. Only two teams in the lower half of the goals allowed-per-game rankings in the regular season won the Cup in the past 11 years – Carolina in 2006, which finished 19th, and Pittsburgh last year, which finished 17th. The Caps, as we noted, are ranked 24th.

It isn’t just the goalies, although both Jose Theodore and Semyon Varlamov have had their struggles at times this year. It isn’t just the defensemen, a squad that lacks a number-one shutdown defender to be sure. It isn’t just the forwards, who tilt a bit too often to the offensive end more than one might like. Defense is a team effort; it is a matter of will. In the playoffs, defense will matter – a lot. And New Jersey is already in playoff mode, because that is the system and the style they play all the time.

And it isn’t just defense for that matter. There is “risk,” and there is “what in heaven’s name were you thinking?” This isn’t an excuse to bash Alexander Semin, who had an especially noteworthy turnover last night. There are other Caps who play with the puck from time to time in a manner than might have fans (not to mention, coaches) asking, “what in heaven’s name were you thinking?” A pressure offense is going to leave goaltenders out on an island from time to time. It goes with the territory. But that need not be compounded by plays that reflect a lack of focus or attention to the situation on the ice. Knowledge of when those risks can and should be taken is something that mature teams have. And they tighten up when they need to. Tampa Bay was such a team in 2004 (11th in the regular season in goals allowed-per-game, but second in the playoffs). Carolina was such a team in 2006 (those 3.15 goals allowed in the regular season, 2.40 allowed in the playoffs – third best among playoff teams). And Pittsburgh was such a team last year (17th in the regular season in goals allowed-per-game, fifth in the playoffs).

The Capitals don’t need to be the Devils, but they could use a bit more of the Devil in them. They’ll need it.
Posted by The Peerless at 9:18 AM 2 comments: