"They're putting a Mickey-Mouse operation on the ice.  It's ruining hockey."

TSN.ca reported the following after Federal mediators were dismissed upon completing two (as in, "more than one, but less than three") days of effort at bringing the NHL and NHL Players Association closer to an agreement...

"Sources confirm that NHL commissioner Gary Bettman is awaiting response from NHLPA executive director Donald Fehr on a proposal that owners and players have a bargaining session without any NHL or NHLPA leaders or staff in the room."


OK, now they're just screwing around.  This isn't even serious anymore; they're just coming up with lame, hare-brained schemes to mark the time until they cancel the season. 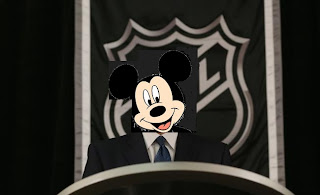 "Mediation?" The Lockout in 50 Other Words Ending in "ation"