The Peerless Prognosticator is ON THE AIR!!! -- Game 72: Calgary Flames at Washington Capitals, March 21st

The Washington Capitals return home on Tuesday night trying to maintain their razor-thin edge at the top of the league standings when they host the resurgent Calgary Flames. The Flames, stuck at .500 as recently as January 24th (24-24-3) after a 5-1 loss to the Montreal Canadiens, are 17-3-1 in their last 21 games. They have climbed from fourth in the Pacific Division and eighth in the Western Conference on January 24th to third in the Pacific Division, just one point behind the Anaheim Ducks for second place, and fifth in the Western Conference.

Since that loss to Montreal on January 24th, the Flames have the most standings points earned of any team in the league (35). They have built their 17-3-1 record since then on a stingy defense that allowed just 46 goals, their 2.19 goals allowed per game average being lowest in the league. And that stingy defense starts with goalie Brian Elliott, who leads the league in wins since January 24th (15), is second in goals against average (1.88 to Jake Allen’s 1.81 with St. Louis), and is third in save percentage (.935, behind Allen at .938 and Anaheim’s Jonathan Bernier at .936).

Elliott will be coming into this game on a roll that could only be explained in a way Caps fans would understand as “Holtbyesque.” He has won 11 straight decisions and is 12-0-1 in his last 13 appearances, over which he has a GAA of 1.67 and a save percentage of .942. Only twice in that span of 13 games has Elliott allowed more than two goals, five on 28 shots in a 6-5 win over the Nashville Predators on February 21st and three on 35 shots in a 4-3 win over the Pittsburgh Penguins on March 13th. He does, as one might expect, have a weakness on the road this season, going 10-7-3, 2.82, .897, although he has won his last four road decisions, including a 3-0 whitewashing of the Winnipeg Jets in his last road game on March 11th. Elliott is 6-4-0, 3.24, .887 in 12 career appearances against the Caps, those GAA and save percentage numbers being his worst against any team in the NHL.

On the offensive side of the puck the Flames have not been quite as impressive at the team level (11th in goals scored since January 24th), but Johnny Gaudreau has. In the Flames’ 17-3-1 run since then, Gaudreau is 6-17-23, plus-14, leading the team in assists and points. Gaudreau, the smallest skater in the league to dress for a game this season (157 pounds, officially), has put together an impressive resume since being taken in the fourth round (104th overall) in the 2011 entry draft. IN that draft class, Gaudreau ranks ninth in goals (71, tied with Columbus’ Boone Jenner), seventh in assists (124, tied with Florida’s Jonathan Huberdeau), and seventh in points (195). The odd part of his numbers this season is that his scoring line is precisely the same on the road as it is at home (8-18-26), although he has been slightly more productive on the road, where he has that scoring line in 29 games compared to 33 home contests. Gaudreau is 0-2-2, minus-2, in five career games against Washington.

Micheal Ferland is the answer to a trivia question. “In the Flames’ 17-3-1 run, who leads the team in goals?” Bet you would have gone a long while before coming up with “Micheal Ferland.” A fifth round draft pick of the Flames in 2010, Ferland is in his second full season and third overall with Calgary. His 14 goals and 21 points in 67 games are career highs. He has done it without getting a ton of ice time. Only three times in 67 games this season has he topped 15 minutes in ice time, and none of those times on the road. In fact, among 18 Calgary skaters appearing in at least 30 games this season, Ferland is averaging the least amount of ice time per game (11:20). What he has been is efficient with the time he has had, best among those 18 skaters in shooting percentage (15.1 percent). Ferland, who is listed a "day-to-day" with an illness, is 0-0-0, minus-3, in three career games against the Capitals. 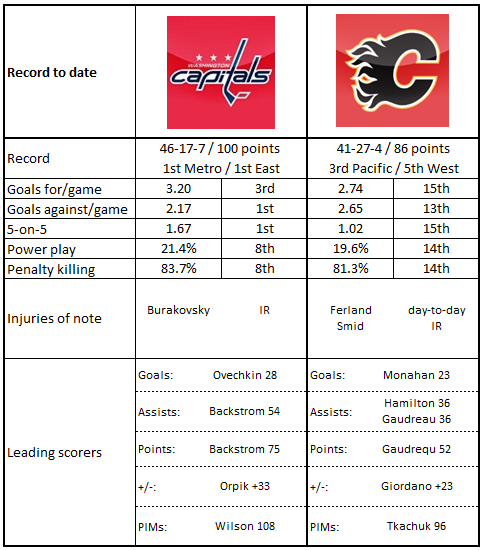 1.  If there is one thing Calgary has not been particularly adept at in their 17-3-1 run, it is getting and converting power play opportunities. Okay, that’s two things, but the Flames have had just 54 power play opportunities since January 24th when they started this run (sixth fewest) and their 16.7 percent conversion rate ranks 21st.

2.  Their penalty killing has been better, but not extraordinary. Over those same last 21 games, the Flames killed 83.9 percent of the shorthanded situations they faced, sixth in the league in that span. Their skill has been in avoiding those situation. With 56 shorthanded situations in their last 21 games, they have had fewer than all but three teams since January 24th (Sane Jose (54), Chicago (54), and Edmonton (49).

4.  Calgary has had a certain scoring balance in their 17-3-1 run. Nine different players are in double digits in points; 17 different players have goals. They spread the ice time around, too. Only two forwards have averaged more than 20 minutes per game (T.J. Brodie with 23:47 and Mark Giordano with 23:26), while no forward has averaged that much (Gaudreau averaged 18:05).

5.  The Flames have been a middle of the road team in terms of possession on their long run of success. They rank 15th in SAT percentage over that span (50.30), although their SAT percentage in close situations is ranked much higher (sixth at 51.98; numbers from NHL.com).

1.  Nicklas Backstrom has been a monster at home, his point total (45) being head and shoulders above his teammates (Alex Ovechkin is next with 34 points).

2.  T.J. Oshie is another player who really likes home cooking. He has 16 goals on 58 shots, the 27.6 percent shooting percentage being best on the team at Verizon Center and best in the league in home shooting efficiency among players with at least 25 shots recorded on home ice.

4.  No player has taken more minor penalties on home ice this year than…Brett Connolly (thought I was going to say “Tom Wilson,” didn’t you?). He has taken 13 minors in 28 home games this season.

Over the last five seasons, Mark Giordano is sixth in goals among defensemen (62), tied for eighth in game-winning goals (11, with Roman Josi, Duncan Keith, Dougie Hamilton, and Justin Faulk), tied for 18th in assists (138, with Shea Weber), and is tied for 12th among defensemen in total points (200, with Oliver Ekman-Larsson and Ryan Suter). His 24:29 in average ice time in those five years ranks 12th among all defensemen. He keeps pretty good company. So why doesn’t he get more attention? Maybe it’s a Calgary thing. His numbers are a bit off this season (12-22-34 in 72 games versus 21-35-56 in 82 games last year), but in one respect they are not. His plus-23 is the best of his career and is tied for ninth in the league this season (with Dennis Seidenberg). He has had only two “minus” games in his last 21 contests. His scoring matters to Calgary’s success, the Flames going 9-1-1 in the 11 games in which he has goals this season and going 20-5-1 in 26 games in which he has a point. For this game, watch his ice time. In games in which he skated more than 25 minutes this season, the Flames are just 12-8-4. Giordano is 2-3-5, minus-2, in nine career games against Washington, the team against which he has the fewest appearances in his career (tied with nine games against Philadelphia).

Which Capital has the best plus-minus on home ice this season?  Which Capital defenseman leads the blueliners in goals scored on home ice?  Which defenseman leads the Capitals defense in penalty minutes at Verizon Center.  If you said “Dmitry Orlov” to all three, you win (okay, so he’s tied in goals on home ice with John Carlson).  Orlov is plas-21 in 36 home games, has five goals, and has been charged with 23 minutes in penalties.  In fact, Orlov is second among Capitals defensemen in goals scored at home since he came into the league in 2011-2012 (17, trailing John Carlson’s 33), and he has four game-winning goals, second only to Carlson’s seven in that span of seasons.  This season he has points in 14 home games in which the Caps are 13-1-0, and the Caps are 4-0-0 in home games in which he scored a goal.  Orlov is looking for his first point in his career against Calgary, going 0-0-0, plus-2, in four games overall against the Flames.

This is pretty much a trap game for the Caps. One, they don’t play Calgary often enough to spin up a healthy hate. Two, it’s easy to overlook the Flames because of their recent history, missing the postseason in six of seven years entering this season. Third, the Columbus Blue Jackets are looming on the horizon, visiting Verizon Center on Thursday. If you look at their underlying numbers, you might conclude that the Flames have out-performed their production. Their possession numbers are uneven, as are their special teams, and their offense doesn’t generate much in the way of chances. What they have done is get excellent goaltending from Brian Ellott, the league’s third star for last week.  But Brian Elliott has not fared well against the Caps in his career, and unless the Caps do enough to beat themselves (not impossible; it is a trap game), he will not improve his numbers in this game.