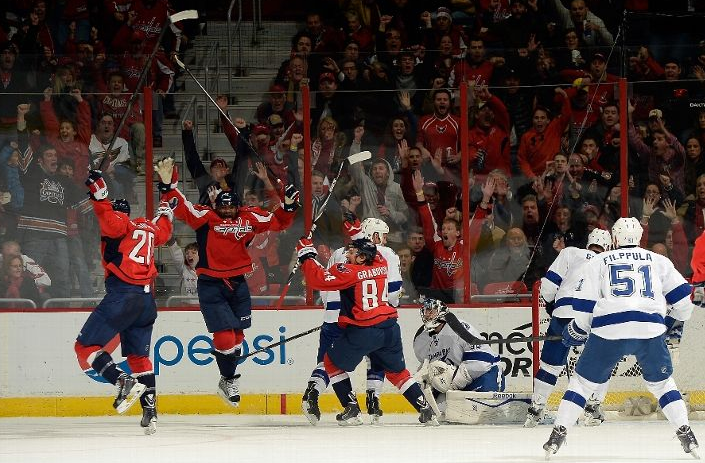 We are up to the fourth game in our look back at games that mattered in the Washington Capitals’ 2013-2014 season, and this one was a virtuoso performance by one from whom such performances are too often taken for granted or set aside in favor of less flattering portrayals.  However, this being hockey, it is never on one player alone, for good or for bad.

The Background:  Goal scorers are streaky, even one as prolific over the course of his career as Alex Ovechkin.  However, he came out of the gate fast in 2013-2014.  He had ten goals in his first ten games and ten more over his next 12 games.  But then the inevitable cold streak hit.  Ovechkin had two goals over his next six games (“cold” being a relative term) leading up to a December 10 matchup against the Tampa Bay Lightning.  What’s more, his running mate, Nicklas Backstrom, had only three points in his previous nine games leading up to this contest, the Caps spinning their wheels with a 4-4-1 record over those nine games.

Why it Mattered:  For 14 seasons the Capitals and the Lightning dueled in the Southeast Division and for five seasons before that as members of the Atlantic Division, the Caps holding a 68-29-5-6 regular season record against the Bolts as divisional rivals.  Realignment would separate them in the 2013-2014 season and make their meetings less frequent.  December 10th would be the first meeting of the clubs of the 2013-2014 season.

One thing the Caps had been able to do in recent games leading up to this one was hold down opponents’ scoring.  In their previous five games Washington allowed opponents a total of only 11 goals, going 4-1-0 in the process. Braden Holtby was the goaltender of record in four of the five games (3-1-0, 2.64, .926).  However, he lasted barely 11 minutes in this game.

Tampa Bay started quickly with six shot attempts (three on goal) to none for the Caps barely two minutes into the contest.  The lightning scored on their fourth shot just 2:26 in when Martin St. Louis took a feed from Sami Salo along the right wing wall, circled out around the faceoff circle, and flung a dart past Holtby through a maze of players in front to score on a power play and give the Lightning a 1-0 lead. 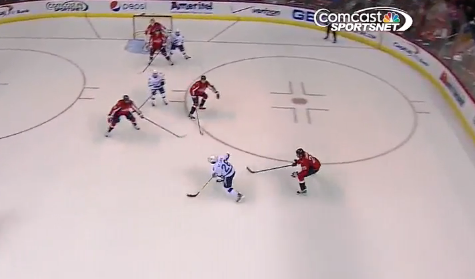 Tampa added to the Caps’ woes with goals just 18 seconds apart mid-way through the first period, the first coming on a Nikita Kucherov power play goal from the high slot on a one-timer, the second coming when Nate Thompson finished a two-on-one rush by converting a feed from J.T. Brown.  That goal would end Holtby’s evening in favor of Philipp Grubauer.

The Caps got one back before the first intermission by displaying some rapid fire skills of a different sort.  At 14:14 of the period Thompson and Nicklas Backstrom leaned in to take a faceoff to the left of goalie Ben Bishop.  Backstrom won the faceoff cleanly back to Alex Ovechkin who one timed a rocket past goalie Ben Bishop’s blocker on the far side.  Time of the goal: 14:15. 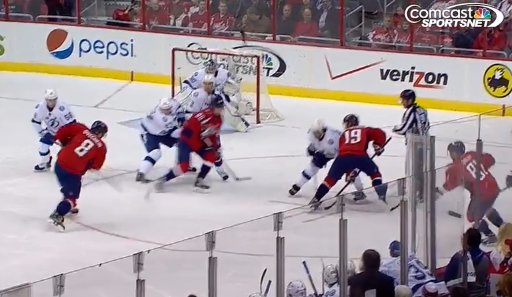 The Caps and Lightning exchanged goals in the second period to make it 4-2, which might have suited the Lightning just fine.  What did not suit them fine was Richard Panik taking a major penalty for boarding Karl Alzner with just 3:29 left in the period.  Ovechkin made the Lightning pay just seven seconds into the power play when he converted a back-door feed from Marcus Johansson.  Just 2:10 later Ovechkin charged interest on the payment when he completed the hat trick with a one-time shot from the left wing circle off a feed from Mike Green.

The teams carried the 4-4 tie into the third period, but Tampa Bay regained the lead in the ninth minute of the period on an Ondrej Palat goal.  It looked as if that might be enough when the Caps pulled Grubauer for an extra attacker with 1:28 left.  It looked more frustrating for the Caps when they could not manage a shot on goal for almost a minute despite having the man advantage.  But with the clock approaching the last 30 seconds of regulation the Caps worked the puck around the offensive zone, from Nicklas Backstrom in the right wing corner to John Carlson at the right point, then across to Ovechkin at the top of the left wing circle.  Ovechkin’s one-timer off Carlson’s feed eluded Bishop on the short side and tied the game at 5-5 with just 32.4 seconds left, his fourth goal of the game.

The rest might have seemed anticlimactic, but after a scoreless overtime the teams went to the Gimmick where they were tied through the first three rounds.  In the fourth round the teams exchanged goals, bringing the competition to a fifth round.  There, Troy Brouwer roofed a shot over Bishop’s glove, and it was up to Grubauer to clinch the deal.  He did, turning away an Ondrej Palat shot, and the Caps had a 6-5 win.

The Takeaway:  For Alex Ovechkin it was the third time in his career he scored four goals in a game and the first time he accomplished the feat since torching Montreal for four goals in a 5-4 overtime win over Montreal on January 31, 2008.  For Nicklas Backstrom, who had a goal and four assists, it was his fourth career five-point game and his first since recording the game-winning goal and four assists in a 6-5 win over the New York Rangers on February 4, 2010.  However, Ovechkin and Backstrom were on ice for two Lightning goals, and both players recorded only one point apiece at 5-on-5.  Both players finished the night “even.”

A theme was being written in bold print by this point of the Capitals’ season, and it was all on display in this game:


The Caps had the skill to win games like this on occasion, but it was not a formula for sustained success as their 17-12-2 record after this game suggested.  This game was not unlike those against Calgary or Detroit among those that mattered this year, making one wonder what it was about this game that mattered.  It was this – getting virtuoso performances from Alex Ovechkin and Nicklas Backstrom was nice, but when you get career-high tying performance from your two top players and manage only to eke out a trick shot win, you are a team with issues.  That is why this game mattered.