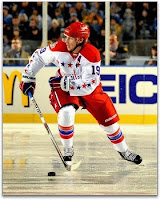 Theme: ”The real glory is being knocked to your knees and then coming back. That's real glory. That's the essence of it.”

Looking at Backstrom’s progress over four seasons, the scoring numbers move along in a manner reminiscent of another Swede. Consider how Backstrom’s numbers progress compared to Mats Sundin…

Mats Sundin started his NHL career with a three year run of constant improvement before suffering a drop-off in his numbers in year four. The same thing has happened to Backstrom. Sundin went on to complete an 18-year career characterized by an almost metronomic point-per-game pace, especially following those first four seasons. Overall, he recorded 1,349 points in the 1,346 games in which he played. Is that the standard of expectations for Backstrom?

Fearless’ Take: In 2009-2010, when Backstrom was scoring those 33 goals for a career high, he averaged 2.71 shots on goal per game. Last season, when he had only 18 goals, he averaged 2.62 shots on goal per game. His shooting percentage last season (8.91) was the lowest of his four-year career. It was 82nd among 116 centers ranked by the NHL. Of course, the 14.86 shooting percentage the previous year was his best, a year in which he was ranked 10th among 122 centers by the NHL. So, which is it? Or is there a happy medium?

Cheerless’ Take: Uh, cuz? Last year you were talking about how some folks compared Backstrom to Peter Forsberg when he was drafted. And now Peerless is comparing him to Mats Sundin? Forsberg won two Stanley Cups. Sundin, well…didn’t.

Over time Backstrom might settle into being something of a “Sundin” type player in terms of his production. This being a different era than that in which Sundin played most of his games, that might translate to being something less than a point a game player, perhaps a 75-80 point player. But that is not such a bad thing. Consider that in the four years Backstrom has been in the league the number of centers recording 75 or more points (according to NHL.com) has dropped from 14 to 12 to 10 to six last season.

In the last 13 games he played last season Backstrom, despite playing through an injured hand (from which he would miss five games in the midst of this late season run), brought up his numbers. He was 3-9-12, plus-6 in those games as the Caps were on their way to clinching the top spot in the Eastern Conference standings. When considered with the strong start to the regular season he had, it might be the flicker of hope that the middle third of the season was just one of those strange stretches any player might go through.

But Backstrom’s numbers might be a product of things out of his control as much as they will be a product of his skill and preparation. He had to assume a more defensive posture in the last 50 games of last season. And that makes us wonder if it is one thing for a player to be more responsible defensively, but quite another for that same player to take on more defensive responsibilities. A player such as Backstrom could certainly be the former and still get more opportunities for offensive zone starts. If he gets those opportunities, his numbers could improve significantly. As it is, there should be some improvement in Backstrom’s numbers…