Our look back at ten memorable goals in the history of the Washington Capitals is up to number six and the first one in the Rock the Red era of the franchise. 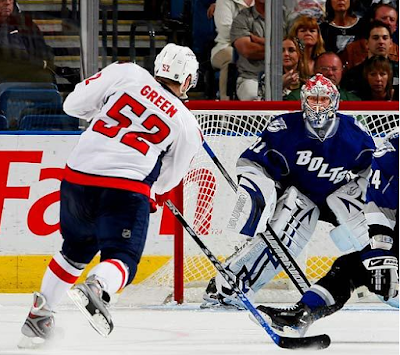 In 2007-2008, his second full season in the NHL, Mike Green established himself as one of the top offensive defensemen in the NHL.  Playing in all 82 games that season (still the only time he accomplished that feat in his ten-year career), Green near the top among defensemen in a number of offensive categories:


There was one area in which he was clearly the best – game-winning goals.  Green notched four game-winning scores that season, tied for the league lead, and three of them came in overtime (tops in the league), earning him the nickname, “Game-Over Green.”

That season was merely prelude to one of the best single offensive seasons by a defenseman in a generation of hockey.  Green started with a flash, going 4-2-6 in his first five contests.  You could say he slowed down a bit after that, recording eight goals in his next 30 games.  Still a nice pace for a defenseman (a 22-goal pace over 82 games), but not extraordinary.

Then came a game in Boston against the Bruins on January 27th.  Mike Green scored a goal barely two minutes into the contest to give the Caps the early lead.  That goal was lost, however, when the Capitals got a scare seeing Alex Ovechkin take an awkward fall into the end boards that left him prone on the ice for 15 seconds (he returned to the game in the third period), and then when the Caps eventually lost the game on a David Krejci bank shot off the skate of defenseman Shaone Morrisonn in overtime in the 3-2 Bruins win.

The Caps returned to the ice four days later to host the Detroit Red Wings in the last game of January, but the hiatus did not seem to affect Green.  After serving two minutes for a hooking penalty earlier in the second period, he atoned for his penalty with a goal that gave the Caps a 2-1 lead on their way to a 4-2 win (he also assisted on the fourth goal to record his 11th multi-point game of the season).

Scoring goals in consecutive games four days apart was one thing, but the Caps took the ice the day after their win over Detroit to face the Ottawa Senators.  It took less than ten minutes for Green to record a goal in his third consecutive game, a power play goal that tied the contest, 1-1.  Less than a minute later, with the Caps on another power play, Green assisted on a goal by Alex Ovechkin to put the Caps in the lead for good.  When it was over, Green had a goal and three assists for his first career four-point game (he has had two since), and the Caps had a 7-4 win over the Senators.

Green was on a roll.  He followed up his three-game goal streak with goals in each of his next four games, including the game-winning and empty net insurance goals in a 3-1 win over the Florida Panthers, to tie an NHL record for consecutive games with goals scored by a defenseman – seven games.  It was a record set in the 1983-1984 season by Boston Bruin defenseman Mike O’Connell.

Only the Tampa Bay Lightning stood between Green and the record on Valentines Day 2009.  The Lightning were struggling, winning just twice in their previous seven contests and falling to fourth in the Southeast Division standings, 11th in the Eastern Conference.  They played like a struggling team against the Caps, too, falling behind by a 3-0 score at the first intermission.  None of those three goals, however, were scored by Green.

The suspense ended early in the second period.  Former Capital Jeff Halpern was in the penalty box for the Lightning, serving two minutes for a hooking penalty.  With the Lightning a man short, Alexander Semin stripped Matt Smaby of the puck in the corner to the right of Tampa Bay goaltender Karri Ramo.  Semin spied Green sliding down between the circles and sent the puck that way.  Green collected the puck and wristed it at the Tampa Bay net.  The shot was blocked by another former Capital, Matt Pettinger, but the puck popped up and dropped at Green’s feet.  Green swatted the puck through Smaby, who by this time made his way to the front of the net, and past Ramo to take the record for himself and help propel the Caps to a 5-1 win.

The goal was Green’s 22nd of the season, and he would go on to finish the 2008-2009 campaign with 31 goals, the most by a defenseman since Kevin Hatcher (yet another Capital or ex-Capital in this story) recorded 34 goals in 1992-1993.  With 31 goals in 68 games, Green finished the season with the eighth-highest goals-per-game for a season among defensemen in the modern era of hockey (post-1967 expansion), surpassed by only Paul Coffey (three times), Bobby Orr (three times), and Doug Wilson.

What made Green’s goal on that night even more memorable was that he scored it with his father, Dave, in attendance.  It was part of the “mentors’ trip” that the team shared with many of the Capitals’ fathers.  For that, the record-setting performance, and being part of a superb season for Green, it is a memorable goal for Caps fans, too.

Photo: Scott Audette/NHLI via Getty Images
Posted by The Peerless at 1:00 PM No comments: