The Peerless Prognosticator is ON THE AIR!!! -- Caps vs. Thrashers, December 4th

The Caps return home tonight after splitting a pair of road games and will find waiting for them the Atlanta Thrashers. If you are a hockey fan with entirely too much time on his or her hands, you know that the Thrashers employ the fifth best general manager in the NHL, in the opinion of the fine folks at that renowned hockey periodical – Forbes Magazine. In naming Don Waddell to their list, Forbes stated…

Among GMs with more than two years on the job, Waddell's average annual payroll ranked next-to-last in the NHL over the past five years. Yet his club won 12 more games than it lost over that span. He was promoted to team president before this season.

We were interested to see what other fifth-place finishers in a variety of categories had said about them. So, in the interest of perspective and context…

Songkick ranks Denver as the fifth top city for rock music in the US, behind such legendary rock and roll havens as Austin,Texas; and Madison, Wisconsin.

San Diego was named as having the fifth best airport in the US by Conde nast magazine, behind… Reagan National? We’ll leave it to you frequent flyers to figure that out.

Money named Bellingham, Washington, the fifth best college town to retire to, behind Prescott, Arizona, home to Yavapai College. No disrespect to the alumni community of Yavapai intended, but the home page for Yavapai features an invitation to become a video game developer. Noble pursuit, that, but we’re not thinking that is what attracts students to, say, the Massachusetts Institute of Technology.

When it comes to assessing the greatness of a hockey general manager, we are wondering about the methodology used by the Forbes crew and their reliance on payroll as a criterion above, oh, winning. In exploring methodologies to evaluate general managers, we were reminded of one of the great assessers of modern (or ancient, for that matter) institutions. Let us read…

But for tonight, the object of the exercise is evaluating the Atlanta Thrashers, the team that just won’t go away. The upstart Thrashers reside in third place in the East, perhaps where one might have expected. But they are the poster team for the Southeast flexing its young muscles, sitting in eighth place in the Eastern Conference. Usually by now you might find one Southeast team in third in teh conference (because someone has to be a division leader), another team maybe fighting for a playoff spot, and the other three teams seeing visions of draft lottery in their futures. Not so this year, largely thanks to the Thrashers. Here is how the overall number fall out… 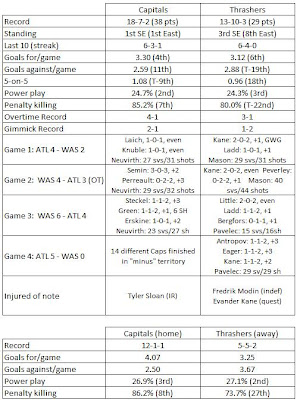 This will be the fifth meeting of the season between these teams. The teams have split the four games played to date, the Thrashers earning an extra standings point for taking the Caps to overtime in the second game of the series, a 4-3 win for Washington. The last time out, though, the Thrashers put up three goals in the first period on their way to pasting the Caps, 5-0.

The status of Evander Kane for tonight’s game is uncertain. That might be the critical question about this game in that while Kane is 9-7-16, minus-7 in 25 games so far this season, he is 5-2-7, plus-3 against the Caps in four games (leaving him 4-5-9, minus-10 in 21 games against the rest of the NHL). Kane is nursing a knee injury suffered when he got in the way of a shot by teammate defenseman Tobias Enstrom last Tuesday in a 3-2 overtime win.

Kane’s status aside, the talk of the town in Atlanta (to the extent the town talks at all about hockey, which, if indicated by Thrasher attendance isn’t much) is Dustin Byfuglien. The big defenseman had a six game points streak ended on Thursday against Pittsburgh, but he is still 5-6-11, plus-6, and two game-winning goals in his last seven games. He has done this after skating only 4:26 in a 2-1 loss to Florida on November 17th when he was struck by a dump-in and could not return. So far this season, though, Byfuglien is “only” 1-0-1, plus 1 in four games against the Caps. But he also has a total of five game-winning goals among the ten recorded so far this season overall.

Under the radar has been Andrew Ladd for the Thrashers. He is second on the club in scoring (8-17-25) and is second on the club in scoring against the Caps this season (3-2-5 in four games so far). The last time these teams met Ladd started what would be a four-game points streak. He had an assist in the 5-0 win on November 19th. But he has cooled a bit, recording a single assist in his last three games.

Ondrej Pavelec has appeared in 14 consecutive games for Atlanta. He also has appeared in three of the four games of the season series in Washington. Since his unfortunate fainting incident in the season opener, Pavelec is 1-1 against the Caps, 0.60, .978, and that 5-0 shutout. In those 13 consecutive appearances Pavelec has a 7-5-1 record, but he also has a 1.67 GAA and a .947 save percentage with two shutouts to go with it. In the 12 games in this streak in which he played the entirety of the contest he allowed more than two goals only three times.

Who? Well, Sopel leads the Thrashers in shorthanded ice time, and the Thrashers will be facing the league’s second best power play, one that is 19-for-55 (34.6 percent) over its last 17 games (12-for-31 on home ice – 38.7 percent). Mr. Sopel is hopefully going to be busy defending this power play.

Atlanta is the last team against which Ovechkin has scored a goal, the first goal of the game 90 seconds in to a 6-4 win. It was his only shot on goal in that game. Since then, Ovechkin is oh-for-nine games and oh-for-41 shots. He does have nine assists in the ten games since scoring that goal (including one in that 6-4 win over Atlanta in which he scored his last goal). In 40 career games against Atlanta he is 29-33-62, including a goal and two assists in four games this season.

1. The frequency of opportunity knocking. These are two of the top power play clubs in the league. The Caps are second in the league, the Thrashers third. The difference is on the other side of the ice – the Caps are the seventh best penalty killing club, while the Thrashers are stuck in a tie for 22nd in the league and 27th in penalty killing on the road. The Caps haven’t had more than four opportunities on the power play since getting seven against the Flyers on November 20th. The Caps scored on three of them. That was seven games ago. If the Caps go north of five power play opportunities tonight, it likely will not be good for the visitors.

2. Make Kanoobie happy. Mike Knuble has four goals this season, one of which came against the Thrashers. His ability to collect the trash from in front, and the ability of his teammates such as Brooks Laich or Eric Fehr or Jason Chimera. Getting those kind of shots might be an important ingredient against a team that is tied for the most shots on goal allowed in the league.

In the end, Atlanta is still a hot team. Before the loss to Pittsburgh they won six games and allowed more than one goal in only one of those six wins. Even in the loss to Pittsburgh on Thursday they allowed only three (none to players not named “Crosby”). This is not your Kovalchuk’s team. They have good goaltending and solid defense at the moment, despite being tied for 19th in goals allowed per game. The Caps will need all the arrows in their quiver to keep the upstarts from getting a leg up in the season series. Of course, you know we think their aim be true…