What Goes Through a Mom's Mind?

We can only imagine what has been going through Washington Capitals goalie Braden Holtby's mom as she watches her son tending goal in this playoff season (pictures from washingtonpost.com...the captions are our own imaginings)... 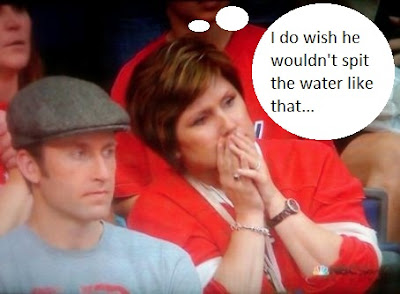 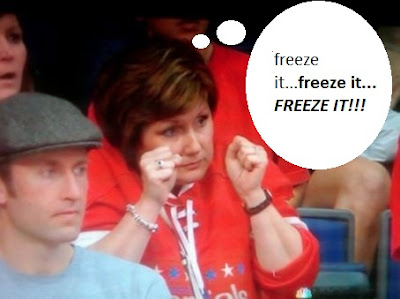 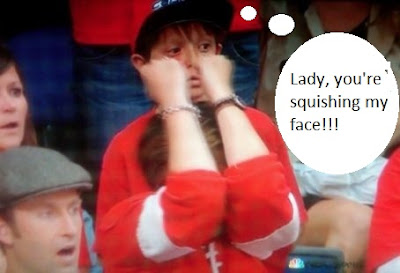 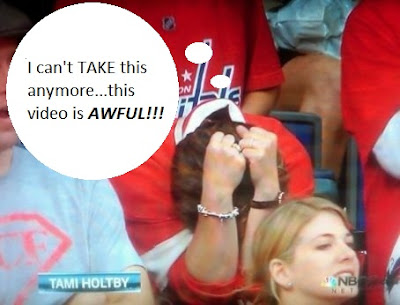 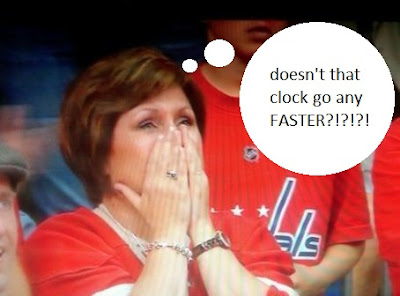 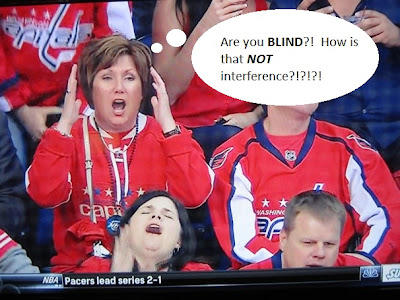 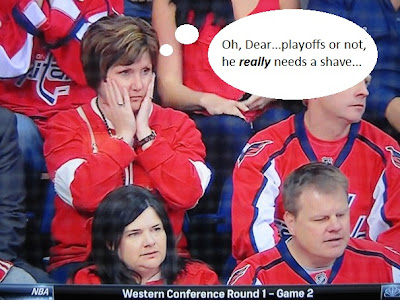 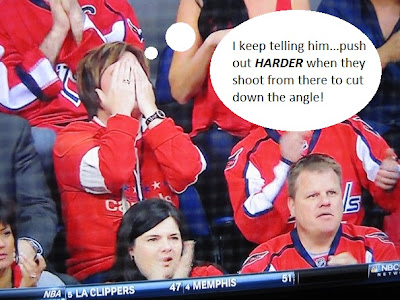 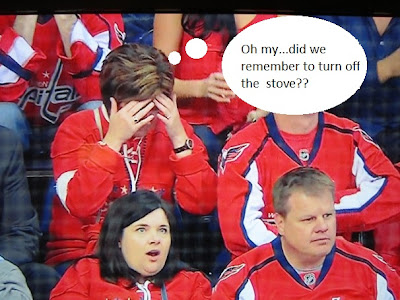 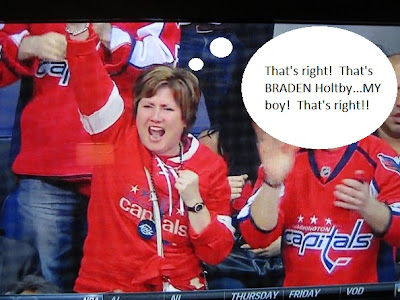 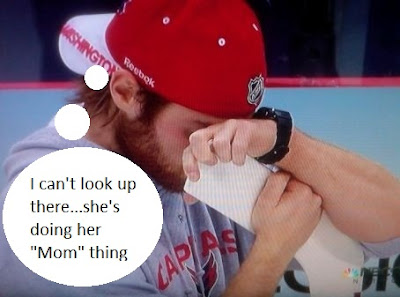 Posted by The Peerless at 2:14 PM No comments:

At this time of year we read and hear about the fight that hockey players have in them. Blocking shots, enduring overtimes that wear on the body and spirit, taking and delivering hits. The will of the hockey player makes his class of athlete among the most deserving of respect by fans and athletic peers alike.

But even the fight to succeed and advance in the Stanley Cup tournament at this time of year pales when compared to a fight another hockey player is engaged in. You see, Gary Lukasiewicz is in a bigger fight – the fight for his life.

Gary Lukasiewicz is an 18-year old senior at Riverdale High School in Taylor, PA, not too far from where we grew up. He is a goalie on his high school’s hockey team and is anticipating enrolling at Villanova University this fall. But for the moment, he confronts a life threatening illness for the second time.

Before his junior year at Riverside, he was diagnosed with sarcoma, a rare form of cancer. Gary beat it back once, but the cancer returned once more. Looking for a way to show support for their friend and classmate, some members of the Riverside community decided to show their support through social media.

As Gary was fighting in a hospice to beat back his illness once more – just one week before his prom and just a month before graduation -- #keepfightinggary was becoming a hotbed of Twitter activity since its original posting earlier this week. His classmates are engaged in what certainly looks like a non-stop effort to make his battle known as a trending topic on Twitter.

Meanwhile, news came – via Twitter, of course – that Gary was going home today where his care will continue. Hopefully, to beat this once, twice, and for all.

#keepfightinggary
Posted by The Peerless at 2:07 PM No comments:

Email ThisBlogThis!Share to TwitterShare to FacebookShare to Pinterest
Labels: #keepfightinggary, the peerless prognosticator 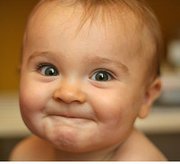 The Washington Capitals will play a seventh game for the second time in these playoffs after defeating the New York Rangers, 2-1, in Game 6 of their second round series at Verizon Center. The Caps used a tried and true formula to secure the win – score first, let Braden Holtby see pucks, and hold on for dear life at the end.

The scoring first part came as a product of Jason Chimera’s speed. It was his breaking down the left side on Anton Stralman that drew a penalty when Stralman swept the skates out from under Chimera with his stick as he tried to poke the puck away. The Caps converted the chance with good puck movement at the top of the offensive zone – Dennis Wideman at the left wing wall to Mike Green, and back to Wideman. Off the reset Wideman sent it out to Green again as Ryan Callahan tried to slide and block the puck. Callahan’s slide took him out of the play, and it would figure in the result. Green moved the puck over to Nicklas Backstrom on the right side, at which time Alex Ovechkin circled into the void left when Callahan went after Wideman. Backstrom found Ovechkin, and the Captain wired a one timer past goalie Henrik Lundqivst’s glove for the game’s first goal just 88 seconds into the game.

It held up for almost 30 minutes of game time, until the 11th minute of the second period. Alexander Semin got things started by being the pony ride for Ranger defenseman Marc Staal. Carrying the puck along the end wall, Semin was ridden then knocked to the ice by Staal, but he popped back up with Staal still providing a nuisance.  Semin shed Staal by darting across the left wing faceoff circle. He tried to get a shot off, but managed only to push the puck across to the right wing wall where John Carlson was waiting. Carlson got a shot off that ricocheted off the toe of Nicklas Backstrom’s skate and across the top of the crease. Henrik Lundqvist was down to defend the Carlson shot, and when the puck slid across in front of him he was in no position to play the puck away. It made for easy pickings for Jason Chimera, who charged to the net as the puck was coming across, and he had only to keep his stick on the ice and redirect the puck behind Lundqvist for a 2-0- Caps lead.

The shutout almost held up for Caps goalie Braden Holtby, but in the last minute the Rangers threw a scare into the Caps when Marian Gaborik wristed a shot from the right point that caught John Carlson in the back on the way through. The shot that would have gone wide ended up redirected past Holtby to get the Rangers within a goal, conjuring unpleasant thoughts of what happened at the end of Game 5. But the Caps held the Rangers without a shot in the last 50.5 seconds, and they lived to play another Game 7 this Saturday at Madison Square Garden.

-- Who was on the ice for those last 50.5 seconds for the Caps as they nursed that one-goal lead? Joel Ward.

-- Holtby came within 50.5 seconds of his first shutout of the post-season. He is the only goalie left in the tournament that has yet to record one.

-- Alex Ovechkin almost created his own hat trick – the power play goal, the goal off the crossbar and in while falling to the ice, and the sweep-shot from his backside for a goal. The last two did not go in, so we wait on this new hockey milestone.

-- Even without the new-found hat trick, Ovechkin was a dervish on the ice – a goal, six shot attempts (three on goal), five hits, and three blocked shots. But what was most encouraging didn’t show up on the score sheet. Ovechkin has not had the reputation of being a player who plays below the dots in his own end, but he was doing just that. Not often, perhaps, but enough to lead by example.

-- Nicklas Backstrom had the kind of night fans have been looking for ion this series. He had a pair of assists (his first multi-point game since Game 6 of the Boston series), two hits (not including his flattening a Ranger in the offensive zone in a manner reminiscent of his plopping Artem Anisimov to the ice in Game 4), and ten wins in 15 faceoffs taken.

-- It was the sixth straight game in which the Caps were even or better on special teams and won the game. They had one power play in three attempts; the Rangers were 0-for-5.

-- The 5-for-5 on the penalty kill included a kill of both ends of a four-minute penalty taken by Jeff Halpern for high-sticking John Mitchell. It was huge, as the penalty came just 1:06 after the Caps took a 2-0 lead. The Rangers managed only three shots on goal in the four-minute power play, and the Caps got off three shot attempts of their own shorthanded, one of them on goal.

-- And sure enough, almost as soon as the Caps killed off the double-minor penalty to Halpern, they got a break in what looked a bit like a make-up call when Jason Chimera (who seemed to be in the middle of everything last night) drew a silly roughing penalty at the players’ benches by Brandon Prust, who should have just skated by.

-- No Cap taking more than one faceoff was on the wrong side of 50 percent for the game. More important, they were 19-for-30 in the defensive end (63.3 percent).

-- The one thing the Caps will want to tighten up – even allowing for scoring differences between rinks – is giveaways. They had 18 (to nine for the Rangers), 13 of them by defensemen and Braden Holtby.

-- The Caps had more shorthanded shots on goal (three) than power play shots (two, one of them for a goal).

-- The Caps are now 4-0 in games following an overtime loss. The flip side of that is that the Caps are 5-2 in games settled in regulation in the playoffs so far (they are 2-4 in overtime games).

In the end, they gave themselves a chance. And in the long slog that is the Stanley Cup playoffs, that is as much as you can ask for. It will be the sixth Game 7 the Caps have played in their last eight playoff series. They have a chance to even their record at 3-3 in those games and, more important, advance to the conference final for only the third time in franchise history. And for a team that is 4-3 on the road in these playoffs, it is not that bad a place to be.
Posted by The Peerless at 3:22 AM 2 comments: