The Peerless Prognosticator is ON THE AIR!!! -- Game 29: Capitals at Hurricanes, December 16th

In days gone by, the contest between the Washington Capitals and the Carolina Hurricanes on Saturday night in Raleigh, North Carolina, would be a “Southeast Division Shootout” with playoff implications.  In the 14-year history of the division, either the Capitals or the Hurricanes won the division ten times, and the clubs finished one-two five times.

However, this contest pits two teams with different histories since the Southeast Division gave way to realignment and a new division in 2013-2014.  While the Caps have been competitive, winning the division once and finishing second once, the Hurricanes have finished out of the playoffs in each of their three Metropolitan Division seasons.  While there is hope for a better future in Carolina, this year the teams appear to be headed toward a similar fate that each realized over the past three years, the Caps a contender for the division title, the Hurricanes struggling to compete for a playoff spot.

Washington comes into this game on a five-game winning streak, tying their longest of the season.  Carolina comes into the contest lurching between wins and losses in December, going 3-2-2 for the month so far.  One of those wins does include an eight-goal explosion in an 8-6 win over the Vancouver Canucks in their last game on Tuesday night, the Hurricanes’ first game at home since spending six of their previous seven games on the road.

The month of December has been good to the Hurricanes' Derek Ryan.  In seven games this month, he is 3-6-9, even, to lead the Hurricanes in points.  It has been quite a ride for the second year forward who, before December, recorded only a goal and an assist in nine games.  The odd part of his recent production, at least as far as the goal scoring goes, is that Ryan is not a prolific shooter.  In 16 games this season he has not recorded more than two shots in any of them and has only 15 total shots.  Only three times in those 15 games has he managed as many as two shots on goal.  He also gets little ice time, only twice in 15 games topping the 15-minute mark.  Ryan is without a point in his only career appearance against the Caps, a 5-1 Hurricanes win on November 12th.

Youth is also served in the Hurricanes’ second leading scorer in December.  Twenty-three year old Victor Rask, in his third season with Carolina, is 2-5-7 in seven games this month, including a three-point performance (1-2-3) in the 8-6 win over Vancouver on Tuesday.  It was Rask’s second straight multi-point game, coming on the heels of a two-assist game in a 4-3 loss to the San Jose Sharks last Saturday, and it was his fifth multi-point game of the season, one behind Jeff Skinner for the team lead.  Rask, 9-12-21 through 28 games in his third NHL season, is on a pace to set personal bests in goals (26), assists (35), and points (61).  He is 1-3-4, even, in nine career games against the Capitals.

Since he came into the league with such a splash in the 2005-2006 season, backstopping the Hurricanes to a Stanley Cup, only four goalies have appeared in more games than Cam Ward (Henrik Lundqvist, Roberto Luongo, Ryan Miller, and Marc-Andre Fleury). Those same four goalies are the only active goaltenders with more wins than Ward (278), but Ward has not been in the upper echelon of goaltenders for a few years now.  Since leading the NHL in appearances (74) and posting a career best .923 save percentage in 2010-2011, Ward ranks 29th among the 50 goalies having appeared in at least 100 games in goals against average (2.59) and 36th in save percentage (.911).   One explanation for this might be high shot volumes that place undue pressure on the goalie, but among that same group of goaltenders Ward ranks just 28th in shots faced per 60 minutes (28.99).  In December, Ward is 2-1-2, 2.51, .914, with one shutout in six appearances, but his one no-decision came in Tuesday’s 8-6 win over Vancouver when he allowed three goals on 18 shots in 25:24 before giving way to Michael Leighton, who took the win.  Ward is 17-15-4, 2.58, .918, with four shutouts in 37 career appearances against the Caps. 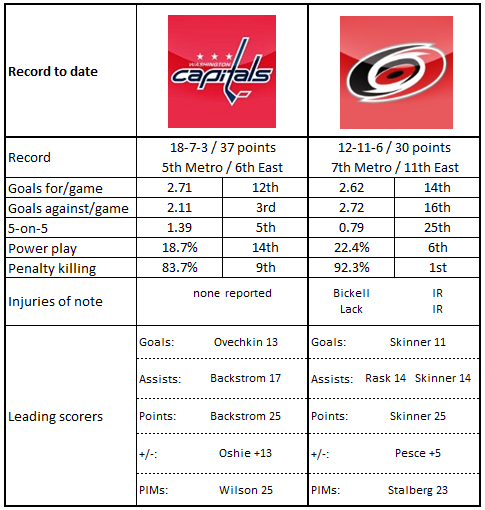 2.  Another aspect of those struggles deals with the Carolina power play.  Their record when recording at least one power play goal is 7-2-5.

3.  Carolina, the top penalty killing team in the league, has allowed power play goals in just six games this season, never allowing more than one man-advantage goal in any of them.   They are 2-3-1 in those games.  Of particular importance fort this game, no club has faced fewer shorthanded situations on home ice than the Hurricanes (28), and only the Arizona Coyotes have allowed as few power play goals on home ice as Carolina (three).

4.  Wins have come hard for Carolina, and not even scoring first – one of the best indicators of who wins and who loses in the NHL – helps the Hurricanes.  Their six wins in 13 games when scoring first is the fourth-worst winning percentage (.462) in the league.

5.  Carolina is among the better teams in possession.  Their overall Corsi-for at 5-on-5 ranks seventh in the league (52.38 percent), and their number on home ice is better (53.12/fourth in the league; numbers from Corsica.hockey).

1.  Since the New York Islanders shut out the Caps, 3-0, on December 1st, the Caps have earned points in six straight games (5-0-1), including a five-game (and counting) winning streak.  Over that span, the Caps have outscored opponents by a 19-9 margin, have gone 7-for-21 on the power play (33.3 percent), and have killed 18 of 21 shorthanded situations (85.7 percent penalty killing).

2.  Justin Williams, who spent much of his first 24 games in a futile search for his scoring touch (two goals on 49 shots), might have been giving signs in that 24th game, the3-0 shutout at the hands of the Islanders.  Williams had seven shots on goal in that game, and although he came up empty, like the rest of the team, he has four goals on ten shots in the Caps’ 5-0-1 run over their last six games.

3.  Evgeny Kuznetsov might claim his teammates as dependents on his 2016 income tax filing, if his last five games are an indicator.  He doesn’t have a goal, but he has seven assists in the five-game Caps winning streak, posting at least one in each contest.

He was the 18th overall draft pick in the 2012 entry draft by the Chicago Blackhawks.  After another year spent in Finland as an amateur, he started making his way up the development ladder, playing the 2013-2014 season in Finland, then getting three games worth of experience with the Blackhawks in the regular season.   He played in 34 games the following season with the Blackhawks and 18 games in the postseason, where he had four goals and ten points.  Then it was a 78-game season in 2015-2016 that was his breakout year, going 13-22-35 for the Blackhawks. However, he recorded just one assist in the postseason for Chicago, and a couple of months later he was trading deep-dish pizza for barbecue, traded to the Hurricanes with Bryan Bickell for a second and a third round draft pick.

It seemed a bit odd that a player drafted as highly as Teravainen would be traded for what looked like meager returns, and with another player to boot.  It might be Chicago’s version of the Caps’ Filip Forsberg adventure.  In his first year in Carolina, Teravainen has put up decent numbers (7-6-13), but not an improvement on the pace he set in his last year in Chicago.  He’s been streaky this season, posting points in three of his first five games, then going seven games without a point, posting points in four of five games a second time, then going eight games without a point.  He comes into this game with points in two of his last four contests (2-1-3), although oddly enough, he was one of the few players (one of six skaters) not to record a point in the 8-6 win over Vancouver on Tuesday.  In three career games against the Caps, Teravainen is 1-4-5, plus-1.

When John Carlson scored his first goal of the season in the Caps’ 4-1 win over the Buffalo Sabres last Thursday, and Matt Niskanen scored his first two goals of the season in the 4-2 win over the New York Islanders on Tuesday night, it left Nate Schmidt and Brooks Orpik as the only Capital defensemen playing in at least ten games without having scored a goal.  That Orpik would be without a goal is not surprising; he has only 16 goals in 850 career regular season games.  Schmidt, however, does have more in the way of offensive potential, and one might think that from a Caps’ fan perspective it is just a matter of time before Schmidt puts a crooked number on his line of the score sheet.  But he is really in a rut in the offensive end.  Schmidt has one point in his last ten games (an assist).  Over that span of games he has only ten shots on goal, half of them coming in the Caps’ 4-2 loss to the Toronto Maple Leafs on November 26th.  In seven career games against the Hurricanes, Schmidt is without a point and is minus-4.

Three times this season the Caps have had a chance to avenge a loss in their next meeting with that opponent.  They lost to the Pittsburgh Penguins on Opening Night in a Gimmick, then pounded the Penguins into seal meal in the follow-up, a 7-1 win in mid-November.  They lost to the Columbus Blue Jackets in overtime on November 15th, but the lost that follow-up, a 3-2 loss in regulation five days later.  Then there was the 3-0 shutout the New York Islanders pinned on the Caps on December 1st, followed up with a 4-2 win in Brooklyn on Tuesday.  Now, the Caps get to do it again, looking to even the score after losing to the Hurricanes, 5-1, on November 12th.

The Hurricanes might have their problems, but in two important respects they pose a challenge to the Caps, particularly in North Carolina.  They do not take very many penalties to put themselves down a man, and they are very efficient at killing the shorthanded situations they do face.  The Caps are among the better 5-on-5 teams in the league, and it might be here where the Caps are going to have to find answers to extend their winning streak to the longest one of the season.

Posted by The Peerless at 6:00 AM No comments: