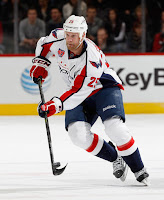 It is widely accepted in the zoological community that the cheetah is the world’s fastest land mammal.  Among its lesser known characteristics is that it is the only species in its genus.  It is described as a “gregarious” animal (at least among the males).  And, it is an animal given to binding with others in “coalitions.”

Five subspecies of the animal have been identified in habitats in Africa and west Asia.  Fans of the Washington Capitals might insist that there is a sixth – the “Ice Cheetah.”  The term is actually a nickname for Jason Chimera, who even though he was approaching his 37th birthday in the 2015-2016 season (his birthday was May 2nd), was still considered among the fastest skaters in the NHL.

However, while speed has been a constant in his career, production had an odd inconsistency about it, especially in his years in Washington.  Six seasons ago, one in which he was traded from the Columbus Blue Jackets to the Caps in mid-season, he finished the year with 15 goals in 78 games.  It was the first year in a “sawtooth” pattern of goal-scoring.  Here are the goals-per-game values for each of those seasons since 2009-2010: 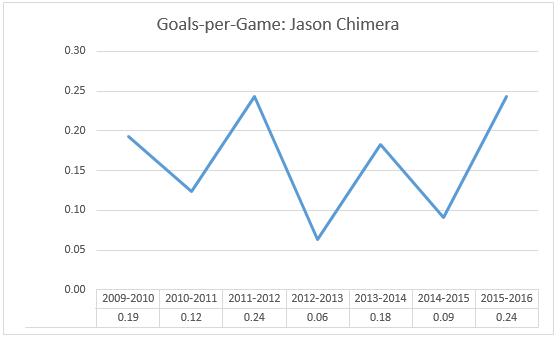 What’s more, his contributions mattered.  “Secondary scoring” is something a lot of us point to as an important ingredient to success.  In 19 games in which Chimera recorded a goal, the Caps were 16-2-1, and they were 26-3-1 in the 30 games in which he recorded a point.

We noted in the season preview that his sawtooth pattern in goal-scoring was accompanied by a similar pattern in ice time per game.  Here is how that played out over the last seven seasons, including this one: 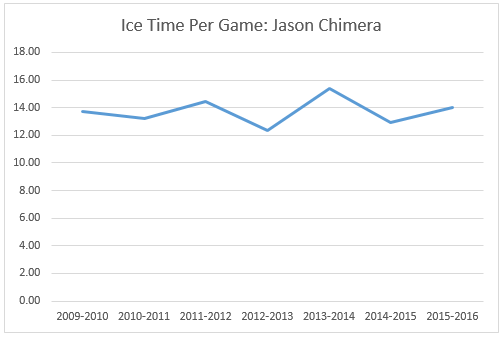 It is not as pronounced, but a similar pattern is apparent.  And we can extend this pattern to his plus-minus as well, but the point is, he has been a persistent up-and-down performer on a year-to-year basis, and this was an “up” year.

Where he had an odd look in his numbers (well, one place, and we will return to that theme) was in his Corsi numbers.  His Corsi-differential at 5-on-5 of minus-70 was second worst on the club (Tom Wilson was a minus-115), but it was a product of two really poor ten-game splits  He was a total of minus-62 in his third ten-game split (minus-35) and his seventh ten-game split (minus-27).  Even with the poor result, and frankly that of the on-ice scoring chance differential (minus-16), he was just a minus-2 in total goal differential at five-on-five for the year (numbers from war-on-ice.com). 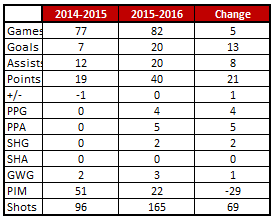 Fearless’ Take…  Two things Chimera did well that do not get a lot of attention were road scoring and shooting efficiency.  He had one of those odd seasons in which his home and road performance numbers were almost mirror images of one another.  On the road he was 15-6-21, plus-9 in 41 games.  At Verizon Center he finished 5-14-19, minus-9 in 41 games.  This despite recording almost 15 percent more shots on goal at home (88 to 77 on the road).  Which brings us to the other thing – shooting efficiency.  Chimera had his best finish in that category in ten years at 12.1 percent (he was 13.4 percent with the Columbus Blue Jackets in 2005-2006), the first time he finished in double digits as a Capital.

Odd Chimera Fact… Something about Wednesdays just did not agree with Chimera.  He had one point in ten games played on Wednesday’s this past season – February 24th, a goal against the Montreal Canadiens.  The Caps lost, 4-3.

The Caps headed to Philadelphia for a game against the Flyers after a tough 1-0 loss in Detroit two days earlier.  Things did not start out well for the Caps, who twice fell behind by a goal by the time the game was just over 21 minutes old.  Then Michael Raffl took a cross-checking penalty mid-way through the second period.  On the ensuing power play, Chimera caught the Flyers playing lackadaisical defense in their own end, cut between two players, took a pass from Evgeny Kuznetsov, and swatted the puck past goalie Steve Mason to tie the game.  After Justin Williams gave the Caps a lead less than a minute later (Chimera earning an assist), Chimera struck again late in the period, tipping a drive by Matt Niskanen past Mason on another power play.  Chimera finished with his only two-goal game of the season and one of his three three-point games as the Caps won going away, 5-2.

The Caps were on their west coast trip, splitting the first two games of the journey with a Gimmick win over the Ducks in Anaheim and an overtime loss in Los Angeles against the Kings.  A win in San Jose would have made it a five-point trip, a nice way to see California.  It didn’t happen.  The Caps laid an egg, and Chimera had some of the mess staining his score sheet.  In just over 11 minutes of ice time (his second lowest total of the season), he had the misfortune of being on the ice for three of the first four Sharks goals – two at even strength and one when the Caps were on a power play.  He added a slashing penalty and managed just one shot attempt for the evening in a 5-2 Caps loss.

It would not be a stretch to say that 2016 was Jason Chimera’s worst postseason in six tries as a Capital.  He did not score a goal in his last ten postseason games, and he had just one point in that span (an assist in Game 1 against Pittsburgh).  It was, as seems a consistent feature of his time spent here, a bit odd.  He was held without a shot in five of the six games against Philadelphia in the first round, scoring his goal on two shots in Game 2.  Against Pittsburgh, he just couldn’t find the back of the net, failing on all 15 shots he recorded in six games, six of those shots on goal coming in the Game 6 series clincher for the Penguins.  The two points in a postseason were his fewest in six postseasons as a Capital, and his 1.42 shots per game was his lowest as well.  His performance was part of a team-wide problem of performance once you got past the top line of forwards.

The Capitals are going to have an interesting and, perhaps, difficult decision to make in the offseason.  Jason Chimera has shown no obvious symptoms of slowing down at age 37, and it appears that he – an unrestricted free agent in this off-season – would like to return to the team.  However, there are a number of restricted free agents to deal with, and one wonders if his age and his propensity for alternating productive and unproductive seasons will weigh into the decisions being made in the front office.  His chief attribute – speed – is one that the Caps will being trying to maintain, if not upgrade, in the off-season.

The year he had in 2015-2016, on its own merits, argues for the club taking a deliberate look at re-signing him.  Twenty-goal scorers do not exactly grow on trees in the NHL, and Chimera does have two in his last four full seasons.  Add to that his durability (he played all 82 games this year and has missed seven games in six full seasons with the club), and it is reasonable that he would return, depending on what his own contract demands will be.  Unfortunately, that is a decision that will not be taken in as speedy a fashion as Chimera displays on the ice.  Whether the “Ice Cheetah” will be seen running down pucks at Verizon Center is something that will unfold at a slower pace.