The Peerless Prognosticator is ON THE AIR!!! -- Game 53: Canucks at Capitals, February 5th

The Washington Capitals wrap up the first half of their season-long six-game home stand on Tuesday night when they host the Vancouver Canucks at Capital One Arena.  The Caps split their first two games of the home stand, beating Calgary on Friday night by a 4-3 margin and dropping a 1-0 decision to the Boston Bruins on Sunday afternoon to snap a 14-game winning streak against the B’s.

The home stand now enters a different phase.  Whereas the Flames and Bruins are among the upper tier of NHL teams, the four opponents against whom they will complete their home stand are either desperately hanging on to a playoff spot of hopelessly out of contention.  Vancouver is one of the former group, a club that went to bed on Sunday night two points ahead of the Colorado Avalanche (Washington’s next opponent) for the last playoff spot in the Western Conference and three points ahead of four other teams.

Vancouver ran off a six-game points streak (5-0-1) in early December to reach the .500 mark in standings points (16-16-4).  In the 16 games since then, they have struggled to find any momentum, winning consecutive games only twice in that span.   However, they have managed to scratch out points by forcing extra time.  Four of those 16 games went to an extra session (one of them to a Gimmick), the Canucks splitting them in posting an 8-6-2 record over those 16 games.  Those 16 games included a six-game road trip in which they went 3-3-0, all three losses by way of shutout.  A six-game home stand that followed was kinder, if barely, the Canucks going 3-1-2.  Vancouver opened a four-game road trip on Saturday with a 5-1 win over the Colorado Avalanche and will face the Flyers in Philadelphia on Monday night before visiting the Caps on Tuesday.

Now in his fifth NHL season, Bo Horvat is the current leader in goals scored for the Canucks over those five years with 89.  Having posted 18 in 52 games so far this season, he seems well on his way to a fifth consecutive season of improvement in his goal totals, starting with 13 in 68 games of his 2014-2015 rookie season up to 22 goals in 64 games last season.  He has been especially productive on the road, where he has recorded a dozen of his 18 goals in 27 road games through Sunday.  He has been in something of a slump lately, though.  He has only one goal in his last 14 games, and he has not scored a goal on the road since he potted one shorthanded in the last minute of regulation to tiethe Nashville Predators and send the game to overtime.  Nashville won, but the goal did gain a standings point for the Canucks that could prove valuable down the road, so to speak.  Horvat is 2-4-6, minus-4, in seven career games against Washington.

When people think of the Vancouver Canucks, no doubt the first players who come to mind are the Brothers Sedin – Daniel and Henrik – who retired after last season, each playing their entire respective 17-year careers with the Canucks.  A player who gets lost in the conversation is defenseman Alexander Edler, who is in his 13th season in the NHL, all with Vancouver.  He is the all-time franchise leader in games played by a defenseman (795), second in goals (89), second in assists (265), first in points (354), first in shots on goal (1,755), and eighth in penalty minutes (531).  Edler is in the last year of a six-year/$30 million contract and has been the object of trade speculation.  On the other hand, his side has expressed interest in remaining with the club.  What makes the situation difficult for player and team is that he remains a productive defenseman in the offensive end, leading the club’s blueliners in goals (five, tied with Ben Hutton), assists (15, tied with Troy Stecher), and points (20).  He is also averaging a team-high 23:30 per game.  That must be weighed against the fact that he is somewhat injury prone.  He missed 15 games earlier this season with a sprained knee ligament, and he has not played in as many as 75 games in any season since he dressed for all 82 games for the only time in his career in 2011-2012.  Edler is 4-4-8, minus-2, in 13 career games against the Caps.

Four goalies have dressed for the Canucks this season, but when Anders Nilsson was traded to the Ottawa Senators with forward Darren Archbald on January 2nd for goalie Mike McKenna (who was waived two days later and claimed by Philadelphia), center Tom Pyatt, and a sixth-round draft pick, the number one goaltending duties fell to Jacob Markstrom.  Since the trade, Markstrom has appeared in nine games, posting a 4-3-2, 2.74, .909 record, which is consistent with his career numbers with Vancouver and the Florida Panthers (2.82/.908).  Markstrom is 0-6-0, 3.44, .895 in six career appearances against the Caps.

However, the Canucks will be playing their third game in four nights when they visit Washington, and that raises the possibility that they will face Thatcher Demko, who has one appearance so far this season (second of his career), a 36-save effort in Vancouver’s 4-3 win over the Buffalo Sabres on January 18th.  Demko, a highly-thought of prospect, has never faced the Caps.

UPDATE: Demko was injured in warm-ups before the game in Philadelphia last night.  Vancouver, which does not have a goaltender under contract in the AHL (Richard Bachman was lost for the season to an Achilles tendon injury), recalled prospect Mike DiPietro from the Ottawa 67's in the Ontario Hockey League, permitted under NHL rule covering such situations. 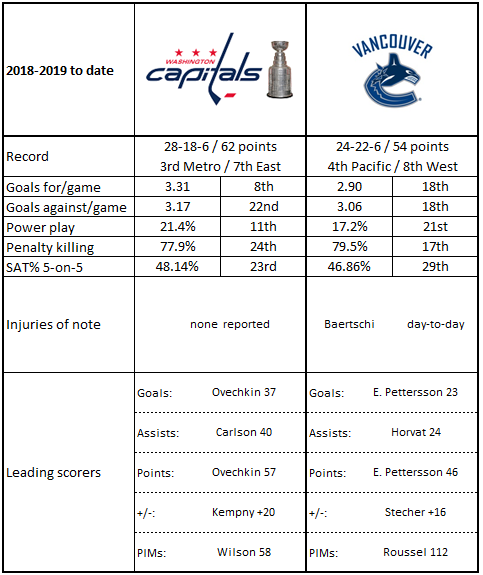 1.  Vancouver leads the league in penalty minutes per game (9:56), due in no small part to a whopping ten misconduct penalties, three more than the next team in line (Florida: 7).

3.  The Canucks get scoring balance from their defense.  All eight defensemen to dress for Vancouver this season have points, and all but Alex Biaga (team-low 14 games played) have goals.

4.  Six of those eight defensemen have a “plus” rating, but Ben Hutton (minus-11) and Erik Gudbranson (minus-19)…yeesh.

5.  Vancouver has the worst shot attempts-for percentage at 5-on-5 of any team in the Western Conference (46.86 percent).

1.  The Caps seem to have lost their scoring touch at home, at least the consistent part of it.  In eight home games since New Year’s Eve, over which the Caps are 2-4-2, they have been held to one goal twice and shut out twice.  On the other hand, they have scored four or more goals three times.

2.  Only to teams in the league have more losses in regulation time when scoring two or fewer goals than the Caps (four) – Dallas has lost five such games and Arizona six.

3.  The Caps have only six losses in regulation this season when out-shooting opponents.  Only Anaheim has fewer (four).  On the other hand, the Caps have out-shot opponents only 19 times in 52 games (10-6-3).

4.  If Alex Ovechkin records a goal against Vancouver, he will join Mike Gartner (19), Peter Bondra (10), and Bengt-Ake Gustafsson as the only Caps to have scored ten or more career goals against the Canucks.

5.  John Carlson is the only Capital defenseman in team history to have appeared in at least five games against Vancouver and average more than a point per game (4-9-13 in 12 games).

At 6’2”/176 pounds, Vancouver rookie Elias Petterson has the type of “frame” that folks might project into a sturdy player down the road.  However, he has had injury issues this season that makes one wonder if he needs to grow into that frame a bit faster.  He lost six games to a concussion in October and another five games in January to a sprained knee.  Nevertheless, he has had a spectacular rookie season, leading all rookies in goals (23 to 12 for Tampa Bay’s Mathieu Joseph and Carolina’s Andrei Svechnikov), assists (23, tied with Buffalo’s Rasmus Dahlin), points (46 to 28 for Dahlin), plus-minus (plus-14 to plus-12 for Pittsburgh’ Marcus Pettersson), power play goals (six to five for Ottawa’s Colin White), power play points (13 to nine for Dahlin and Detroit’s Dennis Cholowski), and game-winning goals (seven to three for Tampa Bay’s Anthony Cirelli and Dallas’ Miko Heiskanen).

As much as it is his leading in so many categories, it is that he does so over such a wide number of players across the categories.  The one number that stands out, though, is the points-per-game number: 1.12.  If he keeps up this pace, he will be just the sixth rookie since the 2005-2006 season to finish a full season playing in at least 41 games and averaging more than a point per game.  It is an impressive list: Alex Ovechkin (1.31) and Sidney Crosby (1.26) in 2005-2006, Evgeni Malkin (1.09 in 2006-20007), Connor McDavid (1.07 in 2015-2016) and Mathew Barzal (1.04 last season).  And, if he maintains his 20-plus shooting percentage (27.7 at the moment), he would stand alone among that group to finish his rookie season averaging more than a point per game with a shooting percentage over 20 percent.  That kind of performance can make one very tolerant of his “prickly” (or not) personality.  This will be his first appearance against the Caps.

By the time the season was 42 games along, Tom Wilson, who missed the first 16 games of the season to suspension, had 13 goals in 23 games played, putting him within one goal of his career high of 14 set last season in 78 games.  “Top Line Tom” was not only getting in the heads of opponents and their fans as a physical hockey player, but as a productive one as well.  The Caps were 11-1-0 in the 12 games in which he recorded goals over that stretch.  However, he has slowed down of late, and it corresponds to the struggles that the Caps have had over the last month.  In ten games since January 10th, Wilson has one goal and a pair of assists despite getting more ice time (19:18 per game compared to the 17:44 he averaged in his 23-game start).  Typically, that goal came in a Caps win, the 4-3 win over the Calgary Flames last Friday.  Wilson’s next goal will be his 50th in the NHL.  He is 4-0-4, plus-7, in nine career games against Vancouver.

The Capitals are entering a portion of their schedule where they have to take advantage of forces in their favor.  Their next four games are on home ice.  They are against opponents who, through Sunday, had a combined record of 87-91-26 and were a combined 16-20-4 in their last respective ten-game segments.  Vancouver has the best recent record of that group (5-3-2), but they will dress two goaltenders who have a combined “zero” career wins against the Caps, and one of them has appeared in only two NHL games. It will likely be the first time that the Caps get a look at Elias “Death Stare” Pettersson, but the Caps have stared down tough opponents before.