The Peerless Prognosticator is ON THE AIR!!! -- Game 68: Devils at Capitals, March 8th

The Washington Capitals, hot off a 5-3 win over the Philadelphia Flyers, owners of a five-game winning streak, and locked in a dogfight with the New York Islanders for the top spot in the Metropolitan Division standings, return home on Friday night after a three-game road trip to host the New Jersey Devils at Capital One Arena.

Since losing in a listless effort in Anaheim to the Ducks, 5-2, on February 17th, the Caps have won seven of eight games to take over the top spot in the Metro (pending the Islanders’ Thursday night contest against the Ottawa Senators), outscoring opponents by a 31-22 margin.  It is the best run of good fortune for the Caps since they went 16-3-0 from November 16th through December 29th.

Meanwhile, the Devils have been slowly and steadily sinking in the standings.  Since the last time they won consecutive games, on January 12th and 14th against Philadelphia and Chicago, they are 7-13-2 and have been outscored by a 70-53 margin.

It probably says something of the Devils’ season that over their 22-game slump, their leading goal scorer is gone.  Marcus Johansson (six goals in that span) was traded to the Boston Bruins at the trading deadline.  Next in line is Jesper Bratt, who has five goals in 20 games.  Bratt, in his second NHL season, had a fine rookie year, finishing tied for 17th among rookies last season in goals (13), tied for 15th in assists (22), and 16th in points (35).  With eight goals in 51 games to date, Bratt appears unlikely to match last season’s goal total, but he has already posted 25 assists to eclipse last season’s total and he needs only two points (he has 33) to match last season’s total.  He was a victim of inconsistency over stretches this season.  For example, while he got off to a quick 2-11-13 start in his first 17 games, he followed that with a 1-2-3 scoring line over his next 13 games.  In his last 21 games he is 5-12-17, although he is listed as day-to-day after sustaining an injury against Columbus on Tuesday.  He is 0-0-0, minus-1, in five career games against Washington.

Damon Severson leads the defense in scoring over the Devils’ last 22 games, both in goals (three) and points (11).  Severson, who is in only his fifth season with the Devils, is already 12th on the all-time franchise list of games played by a defenseman (346), tied for 11th in goals scored (27, with Tommy Albelin).  His next assist will be the 100th of his career, becoming the 12th defenseman in team history to reach 100 helpers, and his 126 career points ranks 12th among defensemen in Devils’ history.  Unfortunately, Severson has played for some of the lesser squads in Devils’ history, a fact reflected by his minus-78 over his five seasons, the third-worst rating among NHL defensemen in that span. This year, his scoring is just a matter of team success when delivering supplemental support.  New Jersey is 16-9-4 in games win which Severson has a point, 9-24-5 in the games he does not.  Severson is 2-3-5, minus-12, in 15 career games against the Caps.

New Jersey is not an awful scoring team; they rank 22nd in scoring offense at 2.81 goals per game.  But neither are they especially formidable, and that is in no small part a product of not having a go-to goal scorer since Taylor Hall went out of the lineup in late December with a knee injury.  In the meantime, Kyle Palmieri is the Devils one and only 20-goal scorer (26).  But he is “week-to-week” with a lower body injury that leaves him doubtful for this game.  That leaves Blake Coleman as the leading goal scorer for the Devils likely to take the ice for this game.

But here is the thing.  Coleman, who has 18 goals in 63 games this season, is without a goal in his last 14 games, and he has only one assist while averaging almost 19 minutes a game.  Nevertheless, Coleman has set a personal high in goals (18), has tied his personal best in assists (12), and reached the 30-point mark for the first time in his three seasons in the NHL.  The absences of others and the general malaise that has settled on this team has made it of limited consequence that he scores goals.  New Jersey is 9-5-2 in the games in which he recorded a goal this season, but his scoring on the road gives the Devils a fighting chance, where they are 5-4-1 in the ten road games in which he turned on the red light.  Coleman is 1-1-2, plus-2, in six career games against the Capitals. 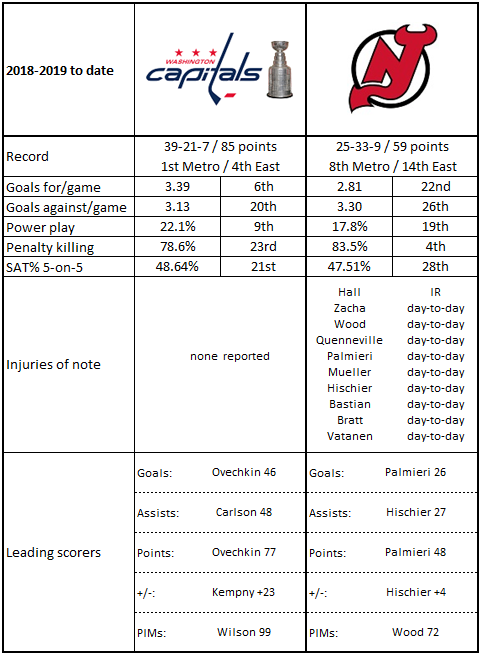 2.  New Jersey struggles to mount much offense on the road.  Only Boston has scored fewer goals on the road among Eastern Conference teams this season (75 in 31 road games) than the Devils (83 in 32 road games).

3.  Defense on the road has also been an issue.  The 125 goals allowed by New Jersey on the road is a total topped only by the Ottawa Senators (149 in 34 road games) and the Chicago Blackhawks (131 in 33 road games) among the league’s teams.

4.  No team in the league has allowed more shorthanded goals on the road than New Jersey (eight).

5.  Shot attempts have been an issue for New Jersey on the road.  Their shot attempt differential at 5-on-5 (minus-233) is fifth-worst in the league, and their SAT percentage at fives (46.08) also is fifth-worst.  They are especially poor when trailing in games, where their 46.93 percent mark is last in the league.

3.  Only the Colorado Avalanche have allowed more power play goals to opponents on home ice (29) than the Caps (25, tied with Detroit).

4.  The Caps can be a handful at home against opponents.  They have scored four or more goals at Capital One Arena 18 times this season.  Only Winnipeg (20) and Tampa Bay (23) have done so more often on home ice.

It has been a long and difficult road for goaltender Cory Schneider.  On February 15th, he stopped all 15 shots he faced in a 36-minute effort in relief of Keith Kinkaid in a 5-4 win over the Minnesota Wild.  He earned the win in that game, the first win he had in almost 14 months, since a 31-save gem in a 3-1 win over the Detroit Red Wings on December 27, 2017.  That winless drought extended to 24 games across two seasons over which he was 0-17-4 (three no-decisions), 4.12, .865.  However, while that long winless streak is over, there remains his performance on the road.  That win over the Wild is Schneider’s only road win in his last 18 road games, extending back to mid-December 2017.  In that span, he is 1-13-3 (one no-decision), 4.07, .873 on the road.  Kinkaid is gone, traded to the Columbus Blue Jackets, and MacKenzie Blackwood, while having posted promising numbers so far (6-6-0, 2.25, .931, with two shutouts in 15 games), might not be ready for a full workload.  Schneider, who with 291 games played in New Jersey is closing in on becoming just the third goalie in Devil history to appear in 300 games, joining Martin Brodeur (1,259) and Chris Terreri (302), could be in a position to resuscitate his career.  Schneider is 3-9-2, 2.68, .905, with one shutout in 15 career games against the Caps.

Oh, to be young, to be able to skate like the wind, and having hands slick enough to stickhandle through crowds and snipe shots into the top corner as if you were shooting a Red Ryder BB gun with a compass in the stock, and that thing which tells time.  That has been what Jakub Vrana has enjoyed this season.  One might say that this season dates back to Game 5 of last season’s Stanley Cup final, when he scored the first goal in what would be the Caps’ Cup-clinching win over the Vegas Golden Knights, but what he has done this season is post a career high in goals (19), assists (22), points (41), plus-minus (plus-18), and shooting percentage (14.5).  If there is an odd part of his numbers this season, it is that he has not been quite as good at home as on the road.  Away from DC, he is 11-11-22, plus-11, in 34 games, while at Capital One Arena, he is 8-11-19, plus-7, in 33 games.  He is ramping things up on home ice, though.  Going into this game, Vrana is 5-8-13, plus-6, in his last 14 home games.  He is 2-0-2, minus-2, in seven career games against the Devils.

As the Caps head into their last 15 games of the regular season, ten games left on the schedule will be against teams currently playoff-eligible, three of those against the league-leading Tampa Bay Lightning.  It puts a premium on scooping up the available points from the also-rans left on the schedule.  This is one of the latter types of games.  New Jersey is without their best player (Taylor Hall), likely to be without their top goal scorer (Kyle Palmieri) and a player with recent goal input (Jesper Bratt), is thinned out at other positions by injuries, and have long been out of playoff contention.  They have allowed 23 goals in their last five road games while scoring only 12 of their own.  It just is not a game the Caps should lose.  So therefore, they will make it interesting.