You can’t swing a dead cat these days without smacking a news story or an opinion column about the Capitals lacking the (choose one or more) defense, goaltending, intestinal fortitude, coaching, or leadership to win a Stanley Cup.
If Bruce Boudreau isn’t on the hot seat, then Alex Ovechkin is trying to wipe the stain of an “annus horrilibis” out of his memory or is the subject of a “project.”  If Mike Green isn’t being judged unworthy of being a Norris Trophy finalist forevermore, or as a defenseman who can’t play defense (or even offense when it matters), then Alexander Semin is being floated as trade bait (or is that Tomas Fleischmann?) for being a no-show in the playoffs.
Folks don’t seem to like Alex much these days, or Ted, or George, or Bruce, or anything wearing a stylized eagle in red and blue.
The Caps lack that certain attractive hook that recent Stanley Cup champs have had.  Detroit had the whole “elegant excellence” thing.  Chicago had the whole “original six team brought back to life” vibe.  And Pittsburgh had, well… Sidney (even if it was Geno’s post season).  The Caps have no history of winning, play in a city that even reasonable people can't stand these days, have players who might like to have too much fun for some.  They are too “rock star,” too millennial, maybe even too European (or maybe too much the wrong “European,” since it didn’t seem to hurt the Red Wings) for the old school types.  More than a few people seem beside themselves with glee over the stumbles – individual and as a group – that befell the Caps last season.
Well, if there is anything that should motivate a club, it is the sort of thing that puts a chip the size of a boulder on their shoulder.  Nothing beats having insults – subtle or explicit – shoved in one’s face as a motivator.  And the Caps certainly haven’t lacked for them in this off-season.
So enough of this nice guy horse hockey.  @#%$ ‘em!   Maybe read or listen to some of the commentary and take a page from the line Colonel Nathan Jessep spoke at the end of “A Few Good Men”…

“This is funny. That's what this is. This is... I'm gonna rip the eyes out of your head and piss into your dead skull! You f***ed with the wrong Capital!”

“You little scumbag! I got your name! I got your ass! You will not laugh! You will not cry! You will learn by the numbers. I will teach you! Now get up! Get on your feet! You had best unf**k yourself or I will unscrew your head and shit down your neck!”

Everybody's cranky.  Check out Twitter or Caps message boards, and you'd think the Caps were a lottery team in waiting.  Even the brain trust seems cranky.  Alex had a bad year?  Mike Green isn’t Rod Langway?  Alexander Semin is missing in action?  The bloom is off Bruce Boudreau's rose?  Media types taking their shots to sell a book?  Yeah, well, we got two words for those guys saying that, and maybe the Caps ought to be thinking it, too, every time they take the ice…
“@#%$ ‘em!”
Posted by The Peerless at 11:50 PM 4 comments:

Day two at Capitals Training Camp 2010 featured a scrimmage between Groups B and C.  But before the “feature” item on the schedule, there was a Group A practice, and it seemed to be a much crisper, more energetic affair than was the case for the Group A squad on Saturday.
First off, Alex Ovechkin started off the session as if exploded from a cannon.  He was all over the ice in the morning session, shooting every puck he found at his feet and in a much more jovial mood than he seemed to be on Saturday.  Although he seemed to be a bit weary by the end of the session, it appeared to be more of a case of an unbridled expenditure of energy over the 75 or so minutes of the session.
It was not Semyon Varlamov’s day.  He not only had more on-ice time than did the skaters (he and Philip Grubauer were out early to take shots from the coaches), but he took a shot off the side of his mask from Ovechkin that dazed him.  Then, after the cobwebs seemed to be just about cleared up, he was run over in his crease by Nikita Kashirsky.
It’s early, but it seems as if the plan that is emerging is to have John Carlson and Karl Alzner skate as a defensive pair.  They certainly seem to have a rapport with one another.
It was a session that was more devoted to defensive matters than was the opening session.  One-on-one, two-on-two, and limited scrimmaging was focused on denying shooters opportunities.  Dylan Yeo drew the unfortunate duty of taking on Ovechkin in most of the one-on-one situations.
The next smile we see on Nicklas Backstrom’s face will be his first of this training camp.  He seemed a bit frustrated with his performance this morning, banging a puck off the boards after flubbing an opportunity and generally sporting a scowl for much of the session.
Brett Flemming had something of a highlight moment when he planted Ovechkin in the ice as Ovechkin was heading to the net in a two-on-two drill.
Zach Miskovic was on the ice skating for a couple of repetitions during the Group A session before heading off the ice.
In the end-of-session bag skate John Carlson and Alex Ovechkin were in the same group.  They were eyeing one another a few times to see who was ahead.  More often than not, it was Carlson, who seems to be a machine in these things.
After the formal session was over assistant coach Dean Evason was schooling Marcus Johansson, Nikita Kashirsky, and Stanislav Galiev on faceoffs.
From the “Who Are You Calling ‘Old?’” file, there was Mike Knuble out on the ice after the formal session ended, shooting pucks around with John Carlson, D.J. King and a few others while the youngsters on his line – Ovechkin and Backstrom – headed off to the locker room.  Age is just a number, folks. 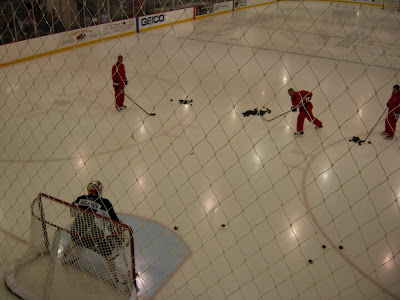 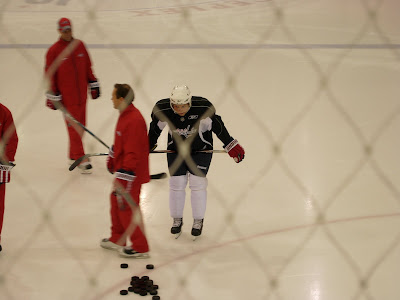 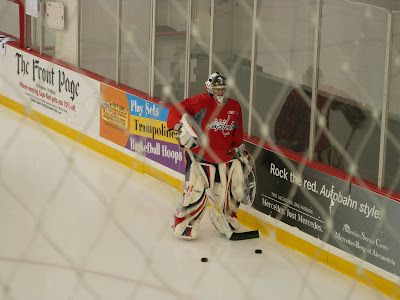 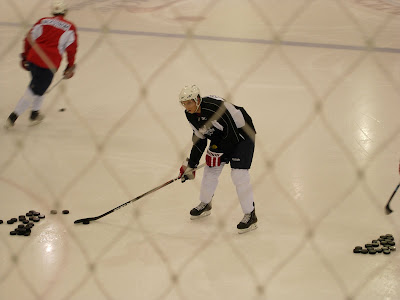 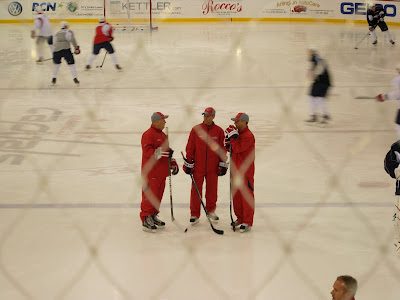 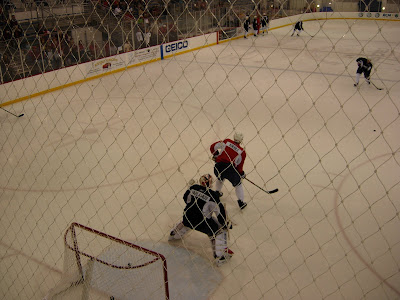 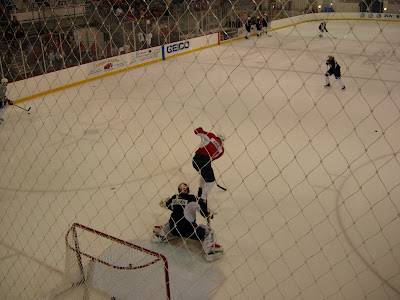 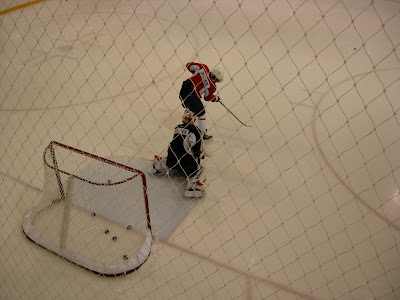 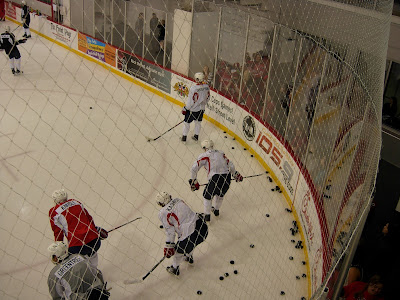 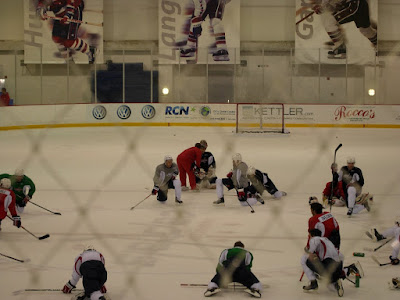 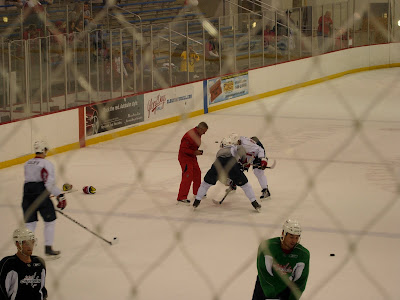 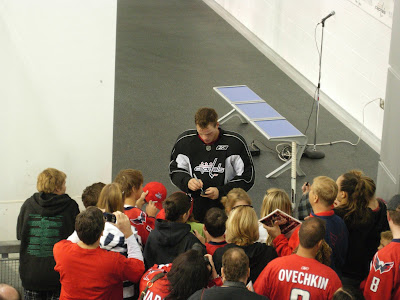