The Peerless Prognosticator is ON THE AIR!!! -- Game 72: Capitals at Flyers, March 18th

The Washington Capitals return to the ice on Sunday, to a venue in which they played perhaps their worst game of the season.  Games between the Caps and the Philadelphia Flyers are never mundane affairs, and for one of the teams to steamroll the other is a source of glee for the players, coaches, and fans of that team.  Such was the case on October 14th, when the Caps, fresh of a 5-2 win over the New Jersey Devils the previous night, were pounded into the pavement by the Flyers At Wells Fargo Center, 8-2.

That was then, and this is now.  And now, the skates might be on the other feet, so to speak.  Washington goes into this game winners of four straight, their longest winning streak since the won five games in a row (Games 39-43) in late December and early January.  On the other side the Flyers, who on February 26th won a sixth game in a row, earned a point in their 12th straight game, and occupied first place in the Metropolitan Division, have lost seven of eight games (1-6-1) in March going into their game Saturday night against Carolina and are just four points ahead of Florida, the ninth-place team in the Eastern Conference, on Saturday morning.

The Flyers clearly missed Wayne Simmonds in this difficult stretch.  Simmonds was injured in a 7-4 win over the New York Rangers on February 18th, perhaps in a fight with Anthony DeAngelo, sustaining an upper-body injury that cost him seven games.  He returned to the lineup on March 7th, by which time the Flyers had lost three in a row on their 1-6-1 run of late.  His return to the lineup has not changed Philadelphia’s fortunes, perhaps a product of his having only a goal and an assist (and a team-worst minus-7) in five games since coming back.  His improvement in production matters to the Flyers.  He is one of three 20-goal scorers (21) for the club, and he leads the team with 11 power play goals this season.  He is the only Flyer with both a power play goal and a shorthanded goal this season, and he is third on the club with four game-winning goals.  In 31 career games against the Caps, Simmonds is 6-10-16, minus-1, and he has three career game-winning goals against the Caps, one of five teams against which he has three game-winners.

There is a certain “canary in a coal mine” quality about defenseman Shayne Gostisbehere.  When he records a point, they generally win (22-8-6); when he doesn’t, they don’t (11-16-4).  And lately, he hasn’t.  Playing in all eight games of this 1-6-1 stretch, Gostisbehere has a goal and an assist (oddly enough, both in losses), and he is tied with Simmonds for the worst plus-minus in this stretch (minus-7).  The goal he recorded in a 5-3 loss to the Columbus Blue Jackets on Thursday broke a 19-game streak without one.  That goal having been scored on a power play, Gostisbehere is still without an even strength goal in his last 20 games, since recording one in a 4-3 loss to the New Jersey Devils on February 1st.  His dry spell of late slammed to a halt the momentum he built in having the most productive season of his career to date, points-wise (52, eclipsing the 46 he had in his rookie season in 2015-2016).  In ten career games against Washington, Gostisbehere is 0-6-6, plus-2.

If the Flyers thought they would solve their goalie injury situation with their trade with the Detroit Red Wings for Petr Mrazek last month, another think might be appropriate.  Oh, there was early hope and joy when Mrazek won his first three decisions and stopped 75 of 82 shots (.915 save percentage).  But since then, he is 1-5-1, 4.04, .863 going into Saturday’s game.  And if Mrazek was “Plan C” after injuries to Brian Elliott and Michal Neuvirth, there might not be a “Plan D.”  Alex Lyon, who relieved Mrazek on Thursday, is reported to be the starter against Carolina on Saturday.   Whatever promise he has for the future, he has little experience at the moment.  In this, his rookie season, he has seven appearances (only three complete games) and has a record of 2-2-0, 2.57, .912.  Mrazek is 2-3-2, 2.43, .921, with one shutout in seven career appearances against the Caps, while Lyon stopped all five shots he faced over eight minutes of work in a 5-3 loss to the Caps on January 31st, his only action against Washington. 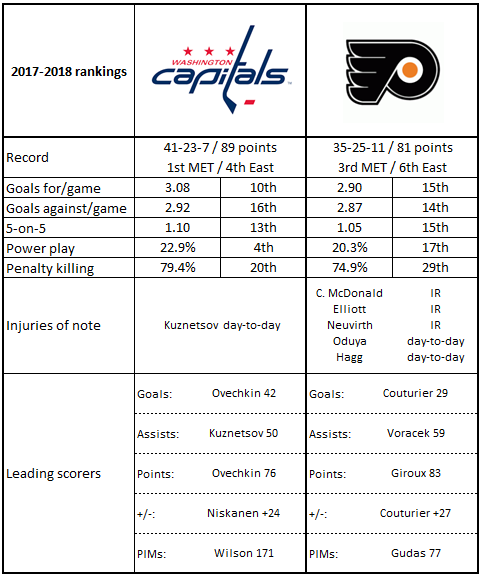 2.  Another odd special teams number: 49:34.  That is Philadelphia’s power play ice time over those eight games.  Only Boston had more (54:32).  Perhaps this is another indicator of weak power play results.  The Flyers are skating off entire power plays without success.  Think of it this way.  The Flyers had 28 power play chances in that span, meaning their average power play lasted 1:43, a large chunk of the usual two-minute power play.

3.  The Flyers have just 14 even strength goals in those eight games.  Only four teams have fewer: Vegas (13 in eight games), Edmonton (11 in seven games), Buffalo (10 in six games), and Vancouver (eight in seven games).

4.  One might get the feeling that the Flyers are skating in a bit of bad luck.  Their shot attempt numbers are not as bad as their record over the last eight games as of Saturday morning.  Their shot attempts-for percentage at 5-on-5 (50.63) ranks eighth overall in that span, 12th in close situations (50.93).

5.  The Flyers are something of a top-heavy team in scoring.  They are tied with Pittsburgh and the Islanders for most players with 65 or more points (three).  The Flyers include: Claude Giroux (83), Jakub Voracek (75), and Sean Couturier (65).

1.  The Caps have won two road games in a row, a 2-0 decision in San Jose against the Sharks last Saturday and a 7-3 win in Brooklyn over the New York Islanders on Thursday.  That matches the longest road winning streak for the Caps this season, achieved on two other occasions, and the first time they put together consecutive road wins in regulation.

2.  The 7-3 win in Brooklyn against the Islanders on Thursday was the highest scoring road game for the Caps this season (highest scoring game, road or home) and largest goal differential on the road (plus-4)

3.  The Capitals are the only team in the NHL to have recorded fewer than 1,000 shots on goal on the road this season.  They have 973, 31 fewer than the Arizona Coyotes through games of Friday.

5.  If the Caps win in Philadelphia, don’t be surprised if they get an empty net goal to tack on.  In 16 road wins this season, the Caps have seven empty net goals from six different players.  Alex Ovechkin is the only Cap with two road empty netters.

Claude Giroux is in his 11th season in the NHL, all with the Philadelphia Flyers.  His longevity (tied for fourth in franchise history in seasons played), durability (he missed a total of nine games over the last nine seasons), and talent has enabled him to occupy a high rank in a number of franchise statistical categories.  Giroux is ninth all-time in Flyers history in games played (727), 13th in goals (206), fourth in assists (452), sixth in points (658), 15th in even strength goals (131), 13th in power play goals (70), 13th in game-winning goals (33), and eighth in shots on goal (1,868).  He has had a renaissance of sorts, his 26 goals through 71 games being his highest goal total since he finished the 2013-2014 season with 28 goals in 82 games, tying a career high he set in 2011-2012.  He has done his best to help the Flyers out of their recent doldrums.  He takes an eight-game points streak into the contest against Carolina on Saturday, and he has points in 16 of his last 18 games, going 11-14-25, plus-9 over that span.  Giroux has been especially lethal on home ice this season, going 16-30-46, plus-19 in 36 games at Wells Fargo Center.  He has an interesting symmetry in his career against the Caps, going 18-18-36 in 36 games with a plus-3.

When Alex Chiasson scored a goal and posted a pair of assists against the New York Islanders in the Caps’ 6-3 win on Friday night, it was his first three-point game since he had a goal and two assists for the Calgary Flames in an 8-3 win over the Anaheim Ducks on December 4, 2016.  Of more relevance to his contributions as a Capital, it was the 11th game this season in which he posted at least one point.  Those games are an example of second- and third-level scoring in a team’s success.  The Caps are 8-1-2 in those 11 games, 6-1-0 in the seven games in which he scored a goal.  His energetic contributions in other areas of offense also parallel Capitals success.  For example, in the 13 games in which he had at least two shots on goal, the Caps are 10-2-1.  He has been something of a good-luck charm generally this season, the Caps holding a 32-17-5 record in the 54 games he has played, 9-6-2 when he was out of the lineup.  In 12 career games against the Flyers, Chiasson is 1-1-2, minus-3.

In this last game of the season series between the clubs (the Caps are 1-1-1 in the first three games), the Caps get the Flyers almost where they should want them.  Setting the fact this game is being played in Philadelphia aside, the Caps will be facing the Flyers as the home team plays a second game in less than 24 hours and their third in four days.  Then there is that record the Flyers have as they head into the first of their back-to-back this evening in Carolina against the Hurricanes (1-6-1).  The Flyers still have goaltending issues, the goalie for whom they traded dropping off in performance and a rookie with scant experience backing him up.  This is a game a veteran team with a purpose should take command of early, to take the fans out of the game (and turn them hostile to the home team, if possible), and win going away before they, well, go away.