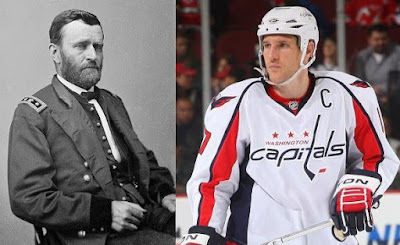 By the time Ulysses S. Grant became the 18th President of the United States, he was no stranger to difficult situations, be they of the military sort or of the political variety.  He was something of a reluctant military man as a youth but eventually climbed to the pinnacle of his profession – command of all Union armies in the American Civil War, answering only to the President – after earning a reputation as a skilled commander in battles in western states during the early phases of the War.  Later, as a civilian, he had conflicts of conscience with President Andrew Johnson over his position as an interim appointee in the Johnson administration.  He would emerge from that as a favorite to win the Presidency and did just that in 1868.  In Grant’s simplicity of style, reputation for honesty, and his role in being a leader in difficult situations, there is a comparable Washington Capital, one who would enjoy success “out west” before coming to Washington and assuming the role of team captain through a difficult period in franchise history: Chris Clark.

Born Hiram Ulysses Grant, the Ohio native became “Ulysses S. Grant” as the result of a paperwork snafu.  It was the name used to place him in nomination to the United States Military Academy by his congressman.  The name stuck, but the idea of military service did not.  It was not a life he intended to pursue after his post-graduation commitment was fulfilled.  Nevertheless, whether as product of his success in his assignments during the Mexican-American War or becoming comfortable with the life, he chose to remain in the military.

After an interlude as a civilian, brought on by his own behavior (he was given a choice of resignation or court martial when his commander received reports of his intoxication when he was stationed in California), he returned to military service to help lead recruitment of soldiers in response to the attack on Fort Sumter in April 1861.  He did not carry a military rank during this effort, though, his episode in California hindering his efforts to obtain a field command.  He eventually was commissioned as a colonel and was given a command in Illinois.  After being promoted to Brigadier General he added to his resume with a series of increasingly important engagements.  Fort Henry, Fort Donelson, and then Shiloh, although in the latter Grant was once more accused of intoxication and was removed from command.  Despite the image of Grant circulating at the time, though, President Abraham Lincoln could not be convinced to believe Grant’s critics.  He is said to have stated at the time that "I can't spare this man; he fights."

Grant continued to fight and continued to earn victories, and he was eventually promoted to lieutenant general and given command of all armies of the Union.  With his new command Grant established headquarters in Virginia, which led to a long series of battles with General Robert E. Lee’s Army of Northern Virginia.  From the Overland Campaign to the Richmond-Petersburg Campaign, Grant fought a long battle of attrition against Lee, eventually forcing the latter’s surrender at Appomattox on April 9, 1865.  It was the first of several surrenders over the next seven weeks that brought the Civil War’s active phase to an end.

Grant remained a commander at the end of the war, and his views on reconstruction aligned (to a point) with those of President Andrew Johnson, who assumed office upon the assassination of President Lincoln in April 1865.  While Johnson and Grant were in agreement on much of the reconstruction question, though, Johnson appreciated Grant’s appeal as a potential presidential candidate and political rival.  With the idea of keeping enemies close, he moved to replace Secretary of War Edwin Stanton, a Lincoln appointee aligned with the “Radical Republicans” that took a less charitable view toward reconstruction, with Grant.  Under terms of the Tenure of Office Act, Johnson would be able to remove Stanton from his position with the approval of the Senate.  However, the Senate was out of session, and Grant (against his own views) accepted an interim appointment.  The Senate reinstated Stanton when it reconvened, but Johnson ordered Grant not to vacate the office.  Grant could only reply that the Tenure of Office Act required him to do so, and he did, earning the wrath of Johnson.

This was all part of the run-up to the election of 1868 in which the incumbent – Johnson – was a damaged commodity.  Impeached (but acquitted by the Senate), his relationship with Congress in tatters, he could not win the nomination of his own party.  Meanwhile, Grant, a war hero and favored by “Radical Republicans” from his break with Johnson, won his party’s nomination and went on to win a convincing victory over Democrat Horatio Seymour in the general election.

His presidency did not resemble his military career.  The qualities that made for steady, earnest progress made on the battlefield that led to victory fell victim to inconsistent, and some might argue corrupt practices in his administration that had some successes and significant failures.  The 15th Amendment to the Constitution was passed during Grant’s first term in office.  The Department of Justice was established under his administration.  He signed the Amnesty Act of 1872 to grant amnesty to former Confederates, thus permitting them to hold public office.  But there were also setbacks that, among others, included scandals that plagued his cabinet, the Panic of 1873 to which the Grant administration responded slowly and ineffectually, and his signing legislation that would have doubled his own salary (a provision tucked away in a standing appropriations bill).  His was a presidency that ranks as mediocre or poor in many quarters, but given the historical context in which Grant had to operate, perhaps a “great” presidency was a goal too high to reach.

Chris Clark had somewhat modest beginnings on his journey to the NHL.  A third-round draft pick of the Calgary Flames in 1994 (taken between Alexei Krivchenkov and Adam Smith, neither of whom ever played in the NHL), Clark went on to play four years with the Clarkson University Golden Knights in the ECAC, putting up good numbers along the way (142 games, 63-65-128).  He graduated to the Saint John Flames of the AHL.  After spending a full season in the AHL, Clark split time between the AHL and NHL the following two seasons (winning a Calder Cup with Saint John in 2001).

It was not until the 2001-2002 season that Clark earned a full-time spot, at age 25, with the Calgary Flames.  It was a difficult time for the Flames, who missed the postseason in each of Clark’s first two full seasons with the club.  In his third full season with the team, though, Clark and the Flames made it all the way to the Stanley Cup final.  Clark had modest numbers in that postseason (3-3-6, even), but he was one of just 11 members of the team to dress for all 26 postseason games.

After a year of the NHL going dark due to a labor-management dispute, the Flames traded Clark and a seventh-round draft pick to the Capitals for two lower round draft picks in August 2005.  None of the players taken with the draft picks exchanged ever made it to the NHL (for the record: Andrew Glass, Devin Didiomete, and Jens Hellgren), but Clark found a home right away in Washington.  In 2005-2006, his first season with the Capitals, Clark scored 20 goals, matching his output from his previous two seasons in Calgary combined.  On a very young club in the midst of a rebuild he was a scoring forward (tied for third in goals, fifth in points for the Caps) averaging a career best 15:24 of ice time per game.

The following season Clark was named team captain and became the 31st player in Capitals history to record 30 goals in a season.  He topped 20 assists (24) and 50 points (54) for the first time (and, to date, only time) in his career, and he posted a new career best 18:25 in average ice time.  His nine power play goals equaled his total from his previous four seasons combined.

But while Clark was posting career highs on a personal level, the team for which he played was mired in the growing pains of rebuilding.  In each of Clark’s first two seasons with Washington, the Caps managed only 70 standings points, missing the playoffs each season.  It was not until Clarks’ third season in Washington that the club returned to competitiveness, using a wild rush to close the 2007-2008 season to snare a playoff spot they had not earned since 2003.

It was bittersweet for Clark.  In his 17th game of the season, in late November against the Florida Panthers, he suffered a groin injury that would keep him out of the lineup for almost two months.  He returned in mid-January, but after skating just nine minutes in a 6-4 loss to the Philadelphia Flyers, he reinjured his groin.  It ended his season.

Things would not improve much for Clark in 2008-2009.  He suffered a wrist injury in the preseason and tried to play through it.  He managed to dress for 32 games, but he scored just one goal, and in early February underwent surgery to end his season prematurely for the second straight year.

The injuries were too much and sustained too closely together in time to one another for Clark to overcome.  In 2009-2010 he got off to an agonizingly slow start – one goal in his first 23 games.  It was not clear that at age 33 and after the series of injuries he suffered, if he would ever return to form.  With the Caps in the midst of what would become their best regular season in franchise history, Clark was traded on December 28, 2009, along with defenseman Milan Jurcina to the Columbus Blue Jackets for forward Jason Chimera.  Clark finished the 2009-2010 season playing 36 games with the Blue Jackets and dressed for 53 games the following season, but the 2010-2011 season would be his last in the NHL.

Ulysses S. Grant started as an obscure soldier, himself uncertain of his desire to pursue that career when he was young, but he rose through the ranks through hard work, determination, and an adherence to principles.  He rose to the top of his profession as one of the most successful generals in American history.  He seemed to be a natural to lead the country from its top civilian office.  However, circumstance and his own shortcomings contributed to a presidency that might be charitably described as of “mixed” success.  Chris Clark started as a mid-round draft pick who rose through the college route and minor league hockey to carve out a successful role as a checking forward for a Stanley Cup finalist in the NHL.  Upon arriving in Washington he realized considerable personal success, but the team he would eventually lead as captain could find little success of its own.  And, when his club finally did become competitive, his own body betrayed him, leaving him to look on as the Capitals returned to the postseason.  “Mixed” might not be the term to describe Chris Clark’s success in Washington, but his stay here certainly could be described as “two-edged.”  It is not hard to see how it is that these two modest, hard-working individuals might be linked in this look back to the past.