“Enthusiasm is the mother of effort, and without it nothing great was ever achieved.”
-- Ralph Waldo Emerson

“Fearless” is a difficult adjective to apply to someone inside the rink by someone outside of it who merely writes about hockey, but it does seem an appropriate term to describe the style of play employed by Washington Capitals forward T.J. Oshie.  He is a skill player with a grinder’s ethic, a physical player who seems, at least figuratively, to punch above his weight constantly.

Even within the confines of the 2019-2020 season there was a consistency in his effort and production.  He never dipped below five points in any ten-game segment, and in four of the seven segments he posted eight or nine points.  Where he produced in bunches was in power play scoring.  Seven of Oshie’s ten power play goals this season were recorded in the first (four PPG) and sixth (three PPG) ten-game segments. 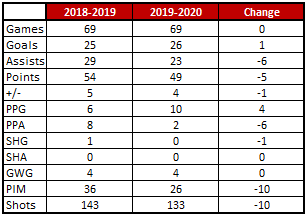 In some respects T.J. Oshie had his best year as a Capital, but you wonder how much longer he is going to be able to produce at this level.  There were 43 players in the NHL with 25 or more goals this season, and only four of them were older than Oshie (Alex Ovechkin, Zach Parise, Patrice Bergeron, and Evgeni Malkin).  One could argue that Oshie plays a grittier game than all of them (even Ovechkin), and despite his playing in every game this season, he missed 37 regular season games over the previous four seasons with the Caps.

Odd Oshie Fact II… For all his willingness to engage physically, Oshie plays well within the limits of the rule book.  He had only 26 minutes in penalties this season, and more than half of those (14) came in a 13-game stretch from October 22nd though November 18th.  And within that stretch, almost half (six minutes) came in a 5-2 win over the Anaheim Ducks on November 18th.

Odd Oshie Fact III… The Caps did not lose a game in regulation in which Oshie skated less than 16 minutes (8-0-1).

Game to Remember… December 11, 2019.  When the Washington Capitals hosted the Boston Bruins in early December, it was a meeting ogf the top two teams in the league, the Caps sporting a league-best 22-5-5 record, and the Bruins three points behind them in the standings with a 20-5-6 record.  Boston took a 1-0 lead to the first intermission on a David Pastrnak goal, but the Caps came back on the strength of a pair of Oshie goals less than four minutes apart early in the second period.  The first came on a Caps power play, the scoring sequence starting when Bruin defenseman Zdeno Chara tried to flick the puck out of the defensive zone with a one-handed swipe, but John Carlson kept it in at the blue line.  Carlson spied Oshie, who the Bruins’ defense completely lost floating to the top of the crease.  Oshie collected the pass, spun, and chipped a shot over goalie Jaroslav Halak’s left shoulder.  The shot hit the crossbar and dropped to the ice, the referee waving his arms to signal no goal, but as he was doing so, Oshie jumped on the loose puck behind Halak and batted it home, tying the game 3:35 into the period.

Oshie’s second goal was worthy of the personal highlight reel.  From along the wall in the defensive zone, Jakub Vrana fed Evgeny Kuznetsov with a pass that Kuznetsov settled at his own blue line.  He then fed the puck ahead to Oshie in stride at the center red line.  Pushing two Bruin defenders back with his advance, Oshie stickhandled the puck through and around defenseman Connor Clifton, broke in on Halak, and backhanded the puck over Halak’s blocker as he was being hooked with a delayed penalty being signaled.  Boston tied the game in the third period, but the Caps won in the end, 3-2, on a John Carlson goal. Oshie finished with two goals on two shots (one of four two-goal games for the season), a takeaway, a blocked shot, and 2-for-4 on faceoffs.

Game to Forget… December 28, 2019.  The last road game of the 2019 portion of the schedule might not be the worst game the Caps played this season, but they could see it from PNC Arena in Raleigh.  Almost without exception, it was a bad night for the visitors.  For T.J. Oshie it was especially unpleasant.  He was on ice for four of the six goals the Hurricanes scored and came up empty on four shots of his own.   He posted his only minus-4 rating of the regular season.  It was the exclamation point on a woeful stretch in which he went 1-0-1, minus-7, over a six-game span, perhaps his worst span of games of all the regular season.

But for a brief flurry over consecutive games in which he recorded three goals – one in the final round robin game against Boston and two in Game 1 of the first round series against the New York Islanders – Oshie had a quiet postseason.  In the other six games, he did not record a point and was minus-7 (he posted another minus-4 in Game 2 against the Isles).  While he managed nine shots on goal in three round robin games, he had only nine in five games against the New Yorkers.

T.J. Oshie just completed year three of an eight-year/$46 million contract that extends through the 2024-2025 season.  While the last years of that contract look to be a bit uncomfortable (Oshie would be 38 years old when it expires), the complicating feature is whether he will be an unprotected player when the expansion draft is held to fill out the roster of the expansion Seattle Kraken next June.  It is possible, if not probable, that the upcoming season will be Oshie’s last as a Capital.

If Alex Ovechkin’s game is the expression of joy, T.J. Oshie’s is the expression of determination.  Rare is the player who seems to bring the singularity of purpose to make a difference with each shift that Oshie brings.  In his own way, he is not slowing down any more than is Ovechkin. He fought through a season last year in which he missed 13 games to injury to play every game this season and continue the high level of production he has posted since coming to Washington.  There are, however, issues with Oshie – two, to be specific.  Can he sustain his health and production next season, and will that season mark the end of one of the more interesting and successful careers in Caps history?