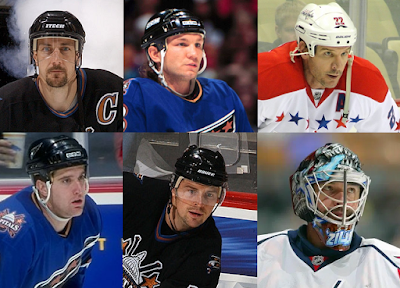 We are almost halfway through the rewind of the All-Alphabet Team of the Washington Capitals that we published in 2014.  Here, we take a look back at the All-Team K, which was as follows:

The 2014 version of the All-Team K would not impress on offense, at least in a flashy sort of way.  Its two big goal scorers – Mike Knuble (22 goals per 82 regular season games as a Capital) and Steve Konowalchuk (17 goals per 82 regular seasons games) – were more of the “collect the trash” sort of goal scorers who pounced on rebounds and scored from scrums in close to the goal.

The other three players were more earnest, offense-challenged players.  The trio of Kevin Kaminski, Ken Klee, and Joel Kwiatkowski combined for 52 goals (43 of them by Klee) in 816 games among them.  Kaminski was more an agitator (483 penalty minutes in 132 games as a Capital), Klee something of a hybrid forward-defenseman “rover,” and Kwiatkowski a dependable sort who did not stand out in any particular aspect.  One would think that it would be here, among these three players, where there would be an opportunity for replacement.

The obvious replacement from among the post-2014 Capitals is at center, where Evgeny Kuznetsov would replace Kaminski.  It was a reasonably close call in 2014, at which time Kuznetsov had as many goals (three) in 17 games as a Capital as Kaminski had in 132 games with the club.  Now, in 479 regular season games with the club (eighth among centers in team history) he has 120 goals (ninth), 269 assists (sixth), 389 points (seventh), 33 power play goals (tenth), and 112 power play points (eighth).

A second replacement is in order as well.  Even though Michal Kempny has had an uneven 2019-2020 season, coming off a season-ending injury in 2018-2019, he has been among the most impressive “K” defensemen in team history (in addition to Kempny, Klee, and Kwiatkowski, that group includes: Staffan Kronwall, Frantisek Kucera, and Tomas Kundratek).  In 151 games, Kempny is 11-35-46, plus-44, three of those goals being game-winners.  He added two goals and five points in 24 postseason games, and he was arguably the last important piece that provided stability to the defensive pairs as the Caps won the Stanley Cup in 2018.  He would be a worthy replacement for Kwiatkowski on the back line of the “All-K Team.”

In goal, there are no netminders for the Caps having dressed since 2014-2015 whose last name begins with the letter “K.”  Even if there was one, it would take an extraordinary record in such a brief time to unseat Olaf Kolzig as the incumbent goalie on this team.  He and Braden Holtby have dominated goaltending for the Caps for better than three decades, and Kolzig remains perhaps the best ever to man the position for the franchise.

So there you have it.  The All-Team K, as revised, is an intriguing one with a lot of different parts and roles.  There is the two-way forward who chips in offense and is an effective forechecker (Konowalchuk), the gifted and flashy center with elite skills as a playmaker or a shooter (Kuznetsov), a formidable net presence (Knuble).  On the blue line there is the versatile (Klee) and the effective puck mover who is a very good complementary piece (Kempny).  And the whole thing is backstopped by a goalie with impeccable credentials and a fiery attitude (Kolzig).  Not the most skilled, not the most physical, not the most edgy, in some ways this still might be the most “Capitals” team of any of the re-imagined alphabet teams to date.

Posted by The Peerless at 1:58 PM No comments: