Washington Capitals: That Was The Week That Was -- Week 25

Week 25 ran the gamut for the Washington Capitals.  They clinched the league’s top record and set a franchise record for wins.  They lost to a bitter rival and were shut out in the desert.  Their top center missed two games to what remains a mystery.  It made for an odd week for the Caps, one that has fans thinking, “Can we just go to the playoffs, already?” 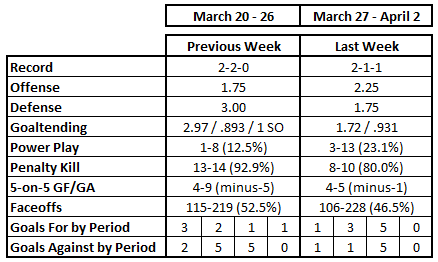 The Caps have now had 21 winning weeks in 25 for the season, although frankly it did not seem like one in some respects.  Beating the Columbus Blue Jackets and Colorado Avalanche was to be expected, those being teams either long out of the playoff race or with only the dimmest hopes of making the postseason.  The losses, though, were troublesome.

Much is made about the Philadelphia Flyers emerging as a formidable foe in the postseason, but it was still a team on which the Caps had more than a 25-point lead in the standings.  Losing to them in the Gimmick was disappointing.  The loss to the Arizona Coyotes to end the week was a head-scratcher.  The Coyotes had little to play for and had the sort of profile the Caps should have eaten up – a poor possession team with an iffy penalty kill.  So the Caps ended up being shut out for the second time in five games, despite dominating the possession statistics.  The losses were not of the sort one wants to see at this time of year.

The Caps are in a situation any team might find itself at some point of the season.  They can’t shoot the puck into the bay from the dock.  The Caps scored nine goals on 148 shots for the week, a 6.1 percent shooting rate, part of a longer slump in which the Caps are 10-for-206 over their last six games, a 4.9 percent shooting rate that is less than half as efficient as their shooting percentage for the season before that (10.2).  It is worse.  Of the nine goals for the week, three of them were scored on the power play, and two were empty net goals, leaving four in four games scored at 5-on-5.  On 124 shots, that is a 3.2 percent shooting percentage.

You could say that the Caps missed Nicklas Backstrom, who was absent for the last two games of the week due to an upper body injury, but the Caps scored just five goals in two games in which he was in the lineup, four in which he was out, and they had a four goal game when he was in an another when he was out.  Let’s not put too much stock in that, acknowledging that any lengthy absence would be a severe blow to the Caps’ postseason chances.

On an individual level, Alex Ovechkin and T.J. Oshie led the team with two goals apiece, but dig a little deeper, and the problem shows itself.  Neither of Ovechkin’s goals was at 5-on-5, and neither were either of Oshie’s.  The full and even strength goals came from Justin Williams, Tom Wilson, Jay Beagle, and Jason Chimera.  The grinders made contributions, and Williams keeps plugging along, but the scoring lines didn’t do much by way of scoring at 5-on-5 for the week.

Week 25 was all about the shots when it came to defense.  The Caps allowed just 22 shots to the Columbus Blue Jackets in a 4-1 win, and they allowed just 19 shots in a 4-2 win over the Colorado Avalanche.  Even the losses were not that bad in terms of shot totals – 34 in a 65-minute Gimmick loss to the Philadelphia Flyers and 27 in the loss to the Arizona Coyotes to end the week.  The Caps are once more becoming stingy in terms of shots allowed, denying opponents more than 30 shots in 15 of their last 18 games.

Of the five 5-on-5 goals scored against the Caps for the week, three players found themselves on ice for three of them – Williams, Andre Burakovsky, and Evgeny Kuznetsov, making it an even more difficult week for players on scoring lines.

In one sense, the Caps really deserved better.  In four games their Corsi-for at 5-on-5 was 58.2 percent.  It was 54.1 percent in the two losses (almost all of that the result of their being 57.4 percent against Arizona).  An even better sign was the Caps’ Corsi-against/60 minutes.  The 50.8 shot attempts per 60 minutes of 5-on-5 ice time for the week, would put them in the top-six in the league over the season as a whole (numbers from war-on-ice.com).

Goaltending for the Caps was very good and almost very good in Week 25.  Unfortunately, that’s the difference between winning all four games and winning just half of them.  Braden Holtby was very good in Week 25, repositioning himself as a, if not the favorite to win the Vezina Trophy as the league’s top goaltender as season’s end.  Holtby was 2-0-1 for the week with a 1.31 goals against average and a .947 save percentage.  Even better was his performance at 5-on-5, situations in which he posted a .966 save percentage (56 saves on 58 shots).  For Holtby it is part of a longer stretch of effectiveness at fives, he has a 5-on-5 save percentage of .944 over his last ten games through Week 25.  How good is that?  No goalie having played more than 25 games this season has a better 5-on-5 save percentage (numbers from war-on-ice.com).

Philipp Grubauer had one start in Week 25, and for 45 minutes it looked as if he would match or surpass Holtby in terms of performance.  He stopped the first 23 shots he faced against the Arizona Coyotes, but then Shane Doan redirected a puck out of the air over his shoulder, and 27 seconds he allowed a goal to Oliver Ekman-Larsson.  By the time he allowed a goal to Brad Richardson, all that good work over the first 45 minutes was undone by three goals on the Coyotes’ last four shots.  It extended a rough stretch for Grubauer, who is 0-3-0, 3.71, .867 in his last three starts.

In a sense it was an “average” week for the Caps on the power play.  A 23.1 percent conversion rate is not significantly different from their season conversion rate (22.8 percent), and their shooting efficiency of 18 shots in 19:50 of power play ice time (0.91 shots per minute).  Scoring power play goals in three consecutive games to open the week was a welcome sign, the first time the Caps did that since putting together a five-game streak to end February and start March.

The Caps got shots from players they need taking them, but with an odd twist.  Alex Ovechkin, T.J. Oshie, and Evgeny Kuznetsov each had three power play shots on goal for the week, Ovechkin (2) and Oshie (1) accounting for all the power play scoring for the week.  However, none of the three recorded a power play shot on goal on either of the two power plays they had against Arizona to end the week. 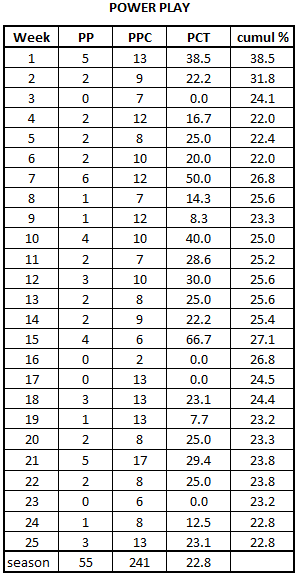 The Caps did well enough on penalty killing, even if the performance was not sparkling.  Allowing only ten chances in four games is half the battle.  And, the Caps shut out the two teams they played this week that finished the week in the bottom half of the league power play rankings (Columbus: 21st, and Arizona: 18th).  They did allow power play goals to Philadelphia, what turned out to be the goal that forced the teams to overtime in that game, and to Colorado, teams that rank squarely in the middle of the league power play rankings (14th and 15th, respectively). 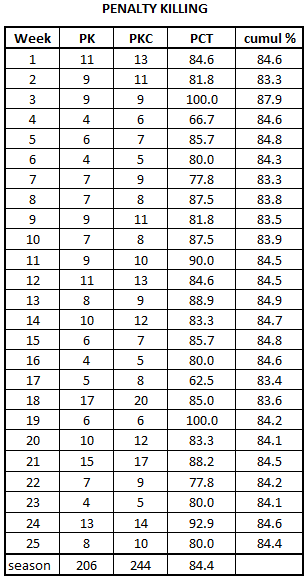 The results in the faceoff circle for the week are misleading.  Think of it this way.  The Caps finished eight draws under 50 percent; Nicklas Backstrom finished the week eight draws under 50 percent (9-for-33).  And, Backstrom finished the week on the shelf for two games with an upper body injury.  Without additional details, perhaps there was a connection between the results.  Given that Backstrom was 1-for-15 in draws against the Flyers, his last game of the week, it is not an unreasonable thought.

At the other end, Jay Beagle seems to have returned to his efficient self.  He was 29-for-49 for the week (59.2 percent) and was 50 percent or better in all three zones.  Mike Richards was third in draws taken for the week, and it did not turn out as well as one might have liked, going 19-for-48 (39.6 percent). 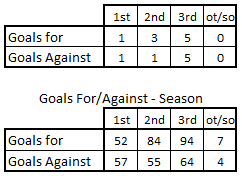 It was a good week in the sense the Caps hit a couple of milestones toward which they had been working over the past several months – clinching the Presidents Trophy against Columbus and setting a franchise record for wins against Colorado.  And frankly, we think a whole lot more is being read into that loss to Philadelphia than has merit.  Still, the Caps did not close the deal against those Flyers, and they ran out of gas against Arizona to close the week, the second half of a back-to-back set of games that started in a city played at altitude.  It made for a week that could have been better, but under the circumstances was not so bad after all.  It was still a precedent-setting week.  Be happy about it.