Yes, we are still early in the season – too early to narrow the field of candidates in any single award category – but there is one Capital who is certainly shining brightly among his peers when it comes to his chances of winning one award.

John Carlson came into the season on many observers’ short lists of Calder Trophy candidates as the top rookie in the class of 2011. He has not disappointed. If you look at his performance compared to his peer group – rookie defensemen – he ranks at or near the top of his class in a whole host of statistical categories: 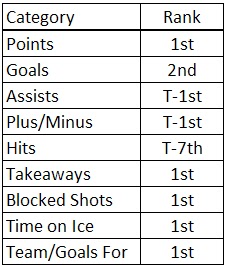 Carlson is not without his rookie moments. He leads all rookie defensemen in giveaways, and he is second in penalty minutes. But in a solid rookie defenseman class that includes the likes of P.K. Subban, Cam Fowler, Keaton Ellerby, and others, Carlson is staking his claim as a “Real Calder Candidate.”
Posted by The Peerless at 6:26 AM No comments:

The Peerless Prognosticator is ON THE AIR!!! -- Caps vs. Sabres, November 17th

The Washington Capitals conclude their brief home stand tonight by hosting the Buffalo Sabres at Verizon Center. The Capitals bring an eight-game points streak into the game and…

“’Scuse me… do you have any room on this bandwagon?”
Beg pardon?


“Is there any room left on this bandwagon?”
I don’t know that you would call it a “bandwagon.” Let me guess… you’re a Redskin fan.


“Tell me about it.”
You stay for the whole game?


“Yup.”
I can see where you might want to jump on to watch a team that is having some good fortune.

“Appreciate it, but I just have one question.”
Yeah, shoot.

“Got a place on this bandwagon where I can stretch out, maybe lay down while the game goes on?”
Well, maybe. Say, that’s a nice “92” jersey you have.


“shhhhhh…”
As we noted, the Caps end a brief two-game home stand tonight with a game against the Buffalo Sabres, a team that interrupted the Caps’ winning ways last Saturday, 3-2 in overtime, to secure their first home win of the season. It is the only blemish on the Caps’ record in the last eight games, during which they are 7-0-1. Over those eight games the Caps have outscored the opposition 39-23 and have scored five or more goals in five of the eight games (not including a Gimmick that resulted in a fifth “goal” for scoring purposes in beating Toronto 5-4). The overall numbers for the teams look like this… 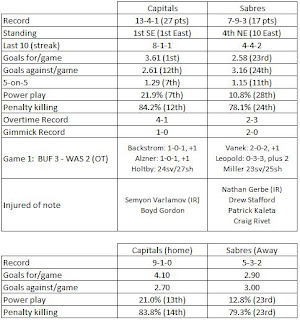 We do not see any particular need to rehash what we wrote about the Sabres last Saturday. Ryan Miller, Derek Roy, the Tylers, Steve Montador…oh, and that Vanek guy. So let’s take a look at the Caps and this eight game points streak.

As you might expect the Young Guns have fattened up their numbers during this streak. It has been an impressive run for the quartet:

That accounts for roughly half (20) of the total goal production (39) over the last eight games, which begs the question of where the rest came from. A total of 13 players shared in the other 19 goals scored, which speaks to contributions up and down the roster. Of particular note is the contribution of the defensemen at the offensive end. In addition to Green, here is how they did:

Then there is the fourth line. Matt Hendricks, Matt Bradley, David Steckel have combined to go 5-7-12, plus-7 over the eight games.

You would be hard pressed to find problems, at least on offense, but two players do come to mind because they have been shuttled around in an effort to spring their offensive games loose. Mike Knuble has been shuttling between the top two lines and hasn’t yet found a consistent spark offensively. He is 2-2-4 over the eight games. Tomas Fleischmann has shown up anywhere between the second and fourth lines, and he is having a worse time than Knuble finding an offensive rhythm. Over the eight games he is 1-2-3.

For the goaltenders, Michal Neuvirth has an unblemished record at 5-0-0 in the eight game run. But it hasn’t been an aesthetic masterpiece. His goals-against average of 3.22 and save percentage of .886 is evidence of his cooling off quite a bit after his strong start. On the other hand Braden Hotlby has performed well in his first three appearances in the NHL. He is 2-0-1, 2.22, .911 to complete the 7-0-1 team record over the last eight games.

Thomas Vanek had a pair of goals in the first meeting of these clubs last Saturday, but lost in the noise was the fact that Leopold assisted on all three Sabre goals. And, he is 2-7-9, plus-6 in his last 11 games. But he has been on the ice for 28 goals against the Sabres this season, the fifth highest total in the league (but still behind teammate Tyler Myers, who is fourth). He is 2-5-7 in 13 career games against the Caps.

Laich is 2-4-6 in the 7-0-1 run the Caps find themselves on, but he drew an oh-fer in points in almost 18 minutes of play against the Sabres last Saturday. He added a giveaway and lost three of four faceoffs for good measure (although he did have three blocked shots). He has not had an especially good time of it against the Sabres in his career, posting two goals and five assists in 20 career games. Laich has only two goals in his last 13 games, but this is not unlike the start he had last season when he put up only two goals in 12 games after he had a pair against Boston in the season opener.  He finished with 25.

1. Power Play. We’ll keep hammering on this as long as the situation remains the same. And by that we mean that the Caps just aren’t spending much (as in “nearly enough”) time on the power play. The Caps are 10-for-26 on the power play in this eight game run (38.5 percent), but 3.25 chances a game (five over the last three) isn’t giving the power play a chance to bury opponents.


2. The Flip Side. The other side of the power play coin is that the Sabres’ power play has been awful – 2-for-35 in their last nine games (5.7 percent). But one of those goals came against the Caps on Saturday. Buffalo is a decent 5-on-5 team (11th in the league). Don’t give them chances to augment that with cheap power play goals.

3. Close ‘em out. Early in the season Michal Neuvirth built a reputation for shutting teams down in the third period. Not so much in this eight-game run. In his six appearances in the third period and overtime over the last eight games he has stopped 48 of 54 shots (.889 save percentage). One cannot count on the Caps to continue scoring almost five goals a game to nullify that number.

In the end, you look at the numbers and wonder how Buffalo can stay with the Caps. Well, they are well-coached; they are a shifty, speedy lot; and they have an elite goaltender. Despite their record (and even that of their elite goaltender – Ryan Miller is 18th in GAA and 27th in save percentage), they do play teams close. Twelve of the Sabres’ 19 games have been settled by one goal, and their record is 5-4-3 in those games, including Saturday's 3-2 overtime win over the Caps. Let a team hang around, and you might not like the result. Surely the Caps didn’t like Saturday’s result.

The trouble for the Caps is that only three teams have scored fewer first period goals than the 11 the Caps have. That has to turn around to force the Sabres to open up and take more risks than they might like against a team with superior talent such as Washington.