The families have gone home, the turkey carcass has been picked clean.  The stuffing, the potatoes, the green bean casserole, the pumpkin pie but a memory.  As for the Washington Capitals this Turkey Week, weeks from now folks will look back on Week 9 and think, “hmm…pretty good.”  That’s why they say, “it’s not how, it’s how many” when it comes to wins and losses.  Because, even though it was a winning week, it smelled like week-old leftovers. 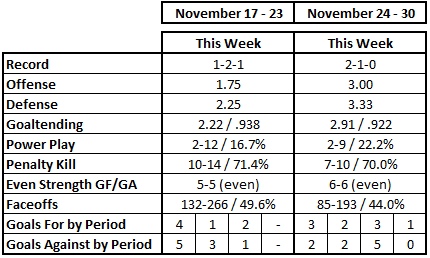 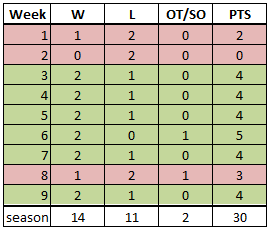 By the end of Week 9 the Caps were back to winning weeks, this one being their sixth in their last seven after opening the season with two losing weeks.  It would have been much better if the Caps remembered in their first game of the week that a hockey game is played for 60 minutes.  Washington took a 3-1 lead over the Ottawa Senators 15 minutes into their game last Wednesday and held it into the 27th minute of the contest.  Over the following 20 minutes, though, the Senators would score three times to take a lead.  They would survive a tying goal by John Carlson, then win going away with a pair of goals in the last three minutes, 6-4.

The Caps looked hardly better in their two wins, both in extra time, giving the Caps the most extra-time wins in the league (eight) and, with their trick shot win on Friday, the league lead in Gimmick wins (six).  What that meant was that while the two wins were welcome, the Caps finished the week ahead of only three teams in the Eastern Conference in regulation time and overtime wins.  Keep that in mind now that the Caps reside in seventh place in the Conference, only two points ahead of Philadelphia (11 ROW) in the Metropolitan Division and behind the two leading wild card teams in points, Detroit (33) and Toronto (31).

It was a “meh” week for the Caps on offense, despite the three goals per game.  A third of those goals came when they sped out to that 3-1 lead against Ottawa in the first game of the week.  That offense came from welcome sources not often heard from this season.  Eric Fehr started things off for the week with his second goal of the season in what was only his second game back in the lineup after missing nine contests to healthy scratches.  Marcus Johansson was next with his third of the season and first in nine games on a power play.  Brooks Laich got his fourth for the season, his second in six games after potting only two in his first 19 contests.

After that, though, it was a pretty dry week – six goals over more than 170 minutes of hockey.  Part of it was the infrequent dry spells had by Alex Ovechkin and Nicklas Backstrom, who came to life just in time to save the week.  Backstrom scored the game-tying goal while the Caps were shorthanded with less than a minute left in regulation against the New York Islanders, Ovechkin getting the overtime winner in that game. For each it was his only goal of the week.  For Backstrom it was his first goal in 13 games, while for Ovechkin it snapped a consecutive games streak without a goal (two straight) that he has not experienced in three weeks and restored him to the top spot in the league in goals scored (21).  It was Eric Fehr, however, who led the Caps in goals (two) and points (three, tied with Mikhail Grabovski) this week.

The shot totals against keep climbing for the Caps.  This week Washington allowed 119 shots on goal (39.7 per game).  It was an odd week, though.  Those 119 shots came on 193 shot attempts, hardly a large volume for almost 190 minutes of hockey for the week.  That 61.7 percent of the shots attempted made it on goal is, at one level, an argument that the Caps allowed their goalies a good long look – by hockey standards – at shots.  As it was, the Caps still allowed 31.7 even strength shots per game.  By itself that average would leave the Caps with only eight teams with more shots allowed per game for the season.

It was Braden Holtby’s week, although that was not the plan.  Michal Neuvirth was to get the start in the middle game of the week, the day after Thanksgiving against Montreal.  But when he came out to take pre-game warmups, he stepped onto the ice and appeared to take a misstep that left him in considerable discomfort.  He retreated immediately to the locker room, his week done.  That left the Caps turning to their video coach by day, emergency goaltender by night to serve as backup – Brett Leonhardt… 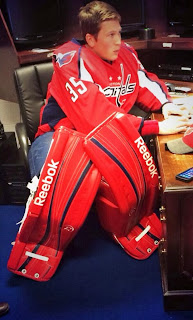 (photo via Sergey Kocharov/Washington Capitals)
That left it up to Holtby to finish the week in net (Philipp Grubauer was recalled from Hershey to serve as backup on Saturday against the Islanders).  He shook off the meltdown against Ottawa when he allowed four goals on the last 24 shots he faced, allowing only four goals on 76 shots (.947 save percentage) against Montreal and the Islanders.  It was part of a stretch in which Holtby has been very, very good (four of his last six appearances with save percentages over .945) or very, very…not good (two of the six at .900 or worse).  In five of those six appearances he faced 37 or more shots on goal.  He is not lacking for work.

In retrospect, it seems almost amazing that the Caps finished the week with two power play goals.  It was not a good week for the man advantage.  First, there were the opportunities.  The Caps had nine overall, but only one of them came against the Islanders in the last game of the week.  And second, the Caps allowed a shorthanded goal on that power play against New York, a goal that might have been the game winner but for some late-game heroics by the Caps (we will get to that).

It was not a good week on the other side of special teams, either.  First, this was the fourth consecutive week in which the penalty kill rate dropped for the season.  Four weeks ago the Caps had a penalty kill rate of 90.7 percent and looked as if they might be a top-five ranked club on both sides of special teams, if not top-ranked.  After four weeks of 37-for-49 penalty killing overall (75.5 percent), the Caps have dropped to 14th in the league.

The “not a good week” part of the week came against Ottawa. Allowing six opportunities is a recipe for trouble, even for teams doing well killing penalties.  Washington allowed Ottawa three power play goals on the first five chances for the Senators, and that was the difference in a 6-4 Capitals loss.  Nine of the Senators’ 40 shots on goal against Braden Holtby came on the power play from five different players over 7:33 of man advantage time.  Twice the Senators scored on deflections when Capitals lost the goal scorer between themselves and Holtby.  Both times it was Karl Alzner victimized, once by Bobby Ryan and the other time by Mika Zibanejad.

Speaking of Alzner, he was one of the same quartet of Caps taken advantage of for all three of Ottawa’s power play goals – John Carlson, Brooks Laich, and Troy Brouwer were the others.  For the rest of the week it could only get better, and it did, the Caps shutting out Montreal and the Islanders on four power play chances overall, allowing no goals on ten shots in eight total shorthanded minutes.  And, it was Nicklas Backstrom’s shorthanded goal in the dying moments of regulation time that tied the game against New York, putting them in a position to make it a winning week.

That the Caps won the week without winning the week at even strength is a hint that it was a welcome result won with less than welcome performance.  It was close, the Caps losing the even strength goals matchup with Ottawa by a 3-2 margin and winning it over the Islanders by a 2-1 margin, with the tie against Montreal in the middle game (2-2) making for another “even” week.

There was enough frustration to go around.  First, there was Alex Ovechkin misfiring on his first 11 even strength shots on goal before hitting on his 12th, at 4-on-4, the game-winner in the Caps’ 3-2 win over the Islanders.  Then there was Marcus Johansson, who was 0-for-10 at even strength.  Finally, there was Mike Green.  In three games Green was 0-for-6 at even strength.  For the season only nine defensemen have taken more shots overall than Green.  None of them – no skater, in fact – has taken more with no goals to show for it.

Here is another area in which the Caps have seen their ranking slip over the past several weeks.  Okay, it was early in the season – Week 2 – in which they ranked 10th with a 53.5 percent overall winning percentage.  After this week – a generally poor week in the circle – they have fallen to 48 percent and 23rd in the league.

Disturbing as the trend has been recently, this week the Caps were worse in the ends than overall.  Washington won only 25 of 68 draws in the offensive end (36.8 percent).  The “offensive” centers – Nicklas Backstrom and Mikhail Grabovski – were only a combined 14-for-44 in the offensive end (31.8 percent).  In the defensive end (46.4 percent overall), the volume generators – Backstrom, Grabovski, and Jay Beagle – were a combined 16-for-32 (50 percent), but only Beagle was over 50 percent (5-for-8).

On the scoring side of the ledger the best that can be said for the Caps was that they were balanced – three in the first period, two in the second, three in the third, with another in overtime.  Either the Caps or their opponents scored in eight of the nine regulation periods for the week, the Caps scoring first in the period four times, their opponents four times.  What the Caps were able to avoid was allowing the early goal.  Only Cal Clutterbuck, who scored at 3:59 of the third period for the Islanders, scored an opposition goal in the first five minutes of a period this week.  The Caps did not score such a goal in any of their nine periods, although Eric Fehr did get one 5:17 into the second period of the Caps’ 3-2 Gimmick win over Montreal.

Wins are wins, and having more of them is better than less of them.  How the Caps got two wins this week is something to think about in terms of whether they can extend their modest two-game winning streak into Week 10, but ten weeks from now no one will care that the two wins were not the most artistic of those the Caps are likely to achieve this season.

Of the Caps who had two or more points this week, it was nice to see that Eric Fehr, Troy Brouwer, Joel Ward, and Jason Chimera among them.  Getting that second and third level of scoring when the big guns are largely dormant (and Mike Green still searching for that first goal) is important.

With the Rangers, Devils, and Flyers all lurking within four points of the Caps, scratching out wins in November, however it is done, will be important when the stretch run comes in March and April.   In that respect it was not pretty, but it was a good week.

Posted by The Peerless at 10:29 PM No comments: