The Washington Capitals have embarked on their second ten-game segment of the season, but the first one merits some examination.

If you compare the Caps’ first ten games this season with their first ten from last season, here is how their numbers line up: 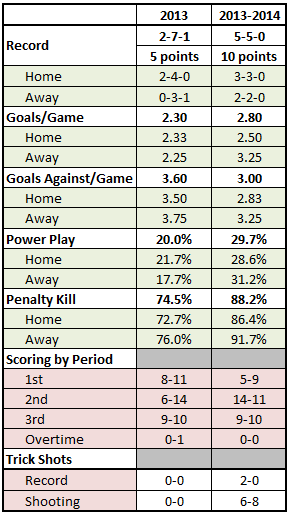 The Caps stumbled badly out of the gate last season, needing a furious finish to win the last Southeast Division title.  This season the Caps did not start with a bang, but neither did they stub most of their toes stepping out into the season.  When the Caps beat Edmonton last Thursday night in Game 10, they found themselves tied for fourth in the Metropolitan Division with the Columbus Blue Jackets.  Compare that to last season when the Caps, with their 2-7-1 record after ten games, not only were last in the Southeast Division, but were last in the Eastern Conference.

Scoring is up, goals allowed are down.  This is not to say, “problem solved,” since the Caps have the lingering problem of their play at 5-on-5.  But they do not have as long or as frequent stretches of “what the hell game are they playing out there” that they had to start last season.

One thing that does seem to have carried over from last season’s first ten games to this season’s first ten is poor starts.  In 2013 the Caps were outscored, 11-8, in the first period of games and trailed five times at the first intermission.  This season the Caps have been outscored in the first period by a 9-5 margin in their first ten games.  They have improved a bit in the lead/trail aspect of their game starts, trailing only three times in ten games at the first intermission.  Five times the Caps went to the locker room tied after 20 minutes, three of them being scoreless games.

One thing the Caps did not do last season was take a lead into the last 20 minutes.  Only three times did they have a lead to start the third period, and only once did they win.  They have not improved on the how many – only three times in their first ten games have the Caps led after two periods.  However, the results have been better with three wins in three tries.

The power play was decent to start the 2013 season for the Caps – 20.0 percent on 8-for-40 performance.  It has been more efficient in the early going this season with a 29.7 percent success rate through ten games (11-for-37).  The odd part is that the Caps recorded 54 power play shots on goal in both last year’s first ten games and this year’s.  One difference is that the Caps were 8-for-54 last season (14.8 percent) versus 11-for-54 so far this season (20.4 percent).  Another one speaks to a higher efficiency.  Eleven goals on 54 shots in 45:32 of power play ice time this season versus eight goals on 54 shots in 65:30 of power play ice time last season through ten games.

Last year the Caps were getting used to a new coach, a new system, and their top offensive player was adapting to a new position, although a bit hesitantly at first.  Alex Ovechkin was only 2-3-5, minus-4, in his first ten games, due in no small part to his being matched with grinders Jay Beagle and Joey Crabb for a portion of that stretch.  A year later, very much settled into his position as a right wing after spending his career as a left winger, Ovechkin was 10-5-15, minus-3 in his first ten games.

If there is a surprise, it might be Marcus Johansson.  Last season he played in only eight of the first ten games and recorded a goal as his only point over that stretch while going minus-7.  He has found a home on the top line in the role of “sidekick” to the Butch and Sundance of Backstrom and Ovechkin.  Through ten games he did not have a goal, but he had ten assists, five of them in his last three games of the series.

Where the Caps are struggling is to get consistency out of the second and third lines.  Part of it is experimentation, trying Eric Fehr as the third line center.  Part of it is trying to find the right combination of wingers to play alongside Mikhail Grabovski. That middle group of players – Fehr, Grabovski, Troy Brouwer, Brooks Laich, Joel Ward, and Jason Chimera – combined for 13 goals over their first ten games.

The personnel differences are Grabovski for Mike Ribeiro and Brooks Laich returning to the lineup after spending most of last season injured.  Grabovski’s four goals through ten games compare favorably to Riberio’s three over a similar stretch to start last season.  Laich, however, has struggled to get consistent production.  Two goals and no assists (and a minus-4) is not what was expected, especially as he settled into the second line center role at the end of the ten-game run.

Five-on-five defense was a challenge last season at the beginning of the Caps’ season, but if anything it has been more of one to start this season.  The Caps allowed 24 even strength goals in their first ten games last season, while allowing 28 goals through their first ten games this season.  Part of the problem this season is facing so many shots.  Through ten games Capital goaltenders faced 286 shots at even strength.  Even before special teams shots on goal are considered, that number would put the Caps with the 19th highest shots per game mark.

The problems cannot be wrapped in a nice, neat bow.  Ten Caps have been on ice for ten or more goals, six forwards and four defensemen.  That leaves it an open question about whether the problems are systemic – something about defensive schemes that needs to be addressed by the coaching staff – or a deficiency of attention or skill on the part of a group of players that would be an ominous cloud hanging over the team as they head into their next ten games.

One thing to take note of through ten games so far this season is the Caps employing nine defensemen already.  Only three Capital defensemen appeared in the first ten games – Mike Green, Karl Alzner, and John Carlson.  Jack Hillen was injured in Game 2, Connor Carrick was sent down to Hershey after Game 5, and John Erskine missed three games to injury.  That meant that the Caps brought Steve Oleksy out of the press box and Nate Schmidt down from Hershey.  Then, the Caps claimed Alexander Urbom from the New Jersey Devils on waivers.  If the Caps can get some continuity or stability among their defensive pairs, it might improve the overall defense, but it will not eliminate the problem that the Caps had coming into this season about what their fourth, fifth, and sixth defensemen would look like.

That has settled out.  Braden Holtby is the number one goaltender, although it did not prevent him from another slow start this season.  In his first two appearances he allowed 12 goals on 45 shots, a .822 save percentage.  Getting pulled in his second appearance after 16 minutes might have been a wake-up call.  Holtby was only 3-3-0 in his next six appearances, but he had a 2.33 goals against average and a .933 save percentage.

With Holtby having taken the reins firmly as the number one goalie, Neuvirth has had limited work compared to his start last season.  He has only one start so far, and it was a long night.  Five goals on 28 shots in a 5-1 loss to Colorado.  His only other appearance over the first ten games was in relief against Calgary, one in which he finished with 27 saves on 28 shots in a 5-4 shootout win.

The Caps are better at this point this season than they were at a similar point last season.  Their record is better, their offense is better, their defense is better… power play, penalty killing, goaltending.  That is not the same thing as saying that the Caps are good.  Not yet, certainly.  There is still tinkering going on among the second and third forward lines and the second and third defensive pairs.

One wonders, as the Caps start into their second ten-game segment, which elements are sustainable.  A 29.7 percent power play would seem to be headed toward a bit of a decline over time, and the Caps might not be as good as their 88.2 percent penalty kill would suggest, especially when the save percentage on the penalty kill is so much better than that at even strength.

On the other hand the Caps have had such sluggish offense early in games.  Their skill set suggests this would not be a permanent feature of this season’s team.  But the big ugly dog in the room is the Caps’ 5-on-5 play that, incredibly, might be worse than last year at this time.  If that does not improve, the second ten-game segment might not look much different than the first.

Posted by The Peerless at 2:47 AM No comments: