The Peerless Prognosticator is ON THE AIR!!! -- Game 9: Capitals at Jets, October 22nd

The Washington Capitals take to the road for what will be their longest non-Olympics absence from Verizon Center this season. The five game trip starts in Winnipeg where the Caps will face the Jets, their former Southeast Division rival, at MTS Centre. It is by no means the only attraction in the crown jewel of Manitoba this week.

There is, for instance, “Big Boom Theory 2: Time Traveling Geeks” at the Celebrations Dinner Theatre, where the cast travel through space and time to prove that nerds really do have more fun. If you want to follow up on the Caps-Jets tilt, you can catch “Abbasolutely Fabbaulous” at the Burton Cummings Theatre on Wednesday. The cast all agree on one thing, “ABBA’s music is fun, the costumes are wacky, they are not something you wear around town, but are ideal to take everybody back to the great musical era of the 70’s”. Hey, we lived in the 70’s…a "great musical era" is open to debate.

Then there is “The Harpoonist and the Axe Murderer” at the Park Theatre. It is described as “a sweaty fling between a sack full of harmonicas, a mess of foot percussion, and a very greasy Telecaster.” In other words, the Caps first half dozen or so games this season. Just a few of the things to see and do in Winnipeg if hockey does not satisfy your sense of spirit and adventure.

Oh, but what about the game, you ask? This will be the third season that the Caps have made visits to Winnipeg, and thus far the Caps have a 4-2-0 record on Jets’ ice. This edition of the Jets is, like their two editions that preceded it, stuck in the mud. After beating Edmonton and Los Angeles in their first two games, the Jets have stumbled to a 2-5-0 record in their last seven games despite all but one of those games played on home ice.

The problem so far this season is that the offense that recorded five goals in each of those two wins to open the season has deserted them of late. In their recent 2-5-0 slump Winnipeg scored a total of 11 goals. Their scoring defense has been reasonably decent, allowing 18 goals over those same seven games (17, if you discount an empty net power play goal scored by Montreal in a 3-0 loss to the Canadiens, an average of 2.43 per game).

Here is how the teams break down, numbers-wise... 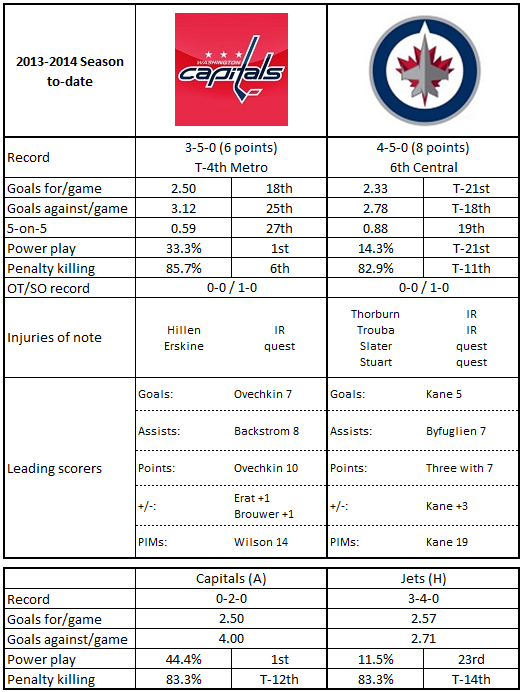 1. If you think Evander Kane scores a lot of goals against the Washington Capitals, you are wrong to think it. Know it. Kane has ten goals in 20 career games against the Capitals, more than he has against any other opponent in the league. Here is the odd thing, though. He has gone five straight games without a goal against the Caps on home ice (0-1-1 overall).

2. The Jets are being killed early, outscored by a 12-7 margin in the first period of games and by an 8-3 margin in the second period.

3. Only Buffalo has scored first in game fewer times (once) than Winnipeg (twice).

4. Winnipeg had a power play goal in each of their first five games this season, each scored by a different player. However, they have none in their last 12 power play chances dating back to the third period of a 4-1 loss to Dallas on October 11th.

5. As of Monday, only Ottawa has taken more minor penalties than the 44 taken by Winnipeg. Only the Senators have found themselves shorthanded more often.

1. The Caps have shutout Winnipeg three times in their last five meetings on MTS Centre ice.

2. Despite the fact that the Caps have played only two road games to date, they are still tied for fifth in power play goals scored on the road (four).

3. Only four teams have scored fewer 5-on-5 goals than the ten scored by Washington to date. Those four teams – Buffalo, New York Rangers, Philadelphia, and Minnesota – have a combined record through Sunday games of 7-23-4.

From the time Dustin Byfuglien joined the Atlanta Thrashers in 2010-2011 through last season, only Shea Weber scored more goals as a defenseman (44 to 40). Oh, there might have been some goals sprinkled in there by Byfuglien on the power play that were scored from in close, but nevertheless, he demonstrated he can pound the puck from the blue line. So what’s with the zero goals to show for his nine games to date this season? It is not as if he has been shy about shooting. Only Vancouver’s Jason Garrison has more shots on goal (31) among defensemen than does Byfuglien (30). One gets the feeling it is only a matter of time, like Mt. Vesuvius, before he blows. Let’s hope the eruption waits for the Jets’ trip to Nashville.

Nicklas Backstrom has one goal on just 14 shots through eight games, not what one might have expected from the top line center, even if he does have eight assists. If he is going to get one of his own, this might be the team against which he does it. Backstrom has more caerer goals scored against the Atlanta Thrashers/Winnipeg Jets (11) than he does against any other NHL team, except Carolina, against which he also has 11 career goals. He has found MTS Centre to his liking. In four career games there he is 2-3-5.

2. Hang ‘em with their own rope. Winnipeg has been shorthanded 41 times in nine games so far. Four times on home ice they have found themselves shorthanded five times. If the Jets want to tie the noose by taking that many shorthanded situations, the Caps could hang ‘em with it.

3. Top Line, Top Notch. It’s one thing to “play” well, another to “perform” well. If you look at the 5-on-5/tied numbers from their game against Columbus on Saturday (source: extraskater.com), you would see that the Corsi-For numbers for the top line, expressed as a percent, were off the charts: Alex Ovechkin: 90.0, Nicklas Backstrom: 83.3, Marcus Johansson: 81.8. It is a small sample size of events, but in this instance they dominated possession. That is “playing” well in a tight game. But the trio did not have a point at 5-on-5. That is the “performance” side of things. In his “30 Thoughts” on Monday, Elliotte Friedman wrote the following:

“[In their 2-0 win over the Caps] the Rangers simply outworked the Capitals, who didn't get great reviews. You can see it on television; there is simply not the same energy or intensity from the team's best players when they aren't on the power play.”

The top line cannot just look good out there, they have to bear down and finish.

Getting away from home has its charms for sports teams, perhaps more so when the club had a disappointing home stand (2-3-0). Winnipeg presents a familiar foe, and the Caps – particularly goalie Braden Holtby (3-0-0, 0.33, .988, 2 shutouts last season) – have had success on MTS Centre ice recently. This is the Caps’ chance to take advantage of a club that is already having trouble scoring goals of their own, and they might catch the Jets peeking ahead to a four-game road trip of their own that starts in Nashville on Thursday. Add on top of that the fact that Ondrej Pavelec was hardly lights out against the Caps last season at home (0-3-0, 4.13, .818), and this is a chance for the Caps to start their road trip on the right foot.

Posted by The Peerless at 5:54 PM No comments: