Washington Capitals: Rivalries Reborn -- The "MetroPatrick" Division, Part VII: The End of It 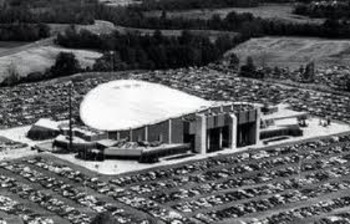 In the end, 14 years of play in the Patrick Division was a mixed bag of results for the Washington Capitals.  There were the moments – the five-goal night Bengt Gustafsson had against the Philadelphia Flyers; the Bobby Gould knockout of Mario Lemieux; Steve Leach scoring goals ten seconds apart against the Penguins (a club record for fastest two goals scored by one player), part of a three-goals-in-21-seconds sequence.

But those were moments in the regular season.  The playoffs were a continuing disappointment for the Caps.  Even when something memorable would take place – Dale Hunter scoring a game-winning, series-clinching overtime win in Game 7 of a playoff series – it would be taken away in short order, the Caps following up their Game 7 overtime win over the Flyers with a seven-game loss to the New Jersey Devils.

In 14 seasons in the Patrick Division the Caps reached the playoffs in each of their last 11 seasons.  In 88 post-season games they posted a 42-46 record in games, averaging 3.4 goals per game for and 3.3 goals per game against.  But within that record was a deeper one of frustration.

The Caps were capable of stringing wins together.  Four times they compiled four-game winning streaks, accounting for more than a third of their total playoff wins over the period.  Oddly, perhaps, none of those streaks came in a single series.  The Caps, in fact, have never swept a seven-game playoff series in franchise history (they did sweep best-of-five series against Philadelphia Flyers in 1984 and the New York Islanders in 1986).

On the other hand, the Caps also had three four-game losing streaks in their Patrick Division playoff history.   They did, however, avoid ever being swept in a best-of-seven series in their 14 years in the Patrick Division.

During this period the Caps were the big tease, which led to the big disappointment.  In 16 playoff series played against Patrick Division teams, this being a period when the first two rounds were intradivisional play, the Caps were 11-5 in Game 1 results.  And what came of those 11 Game 1 wins?  The Caps went on to lose eight of those series.  Worse, the Caps won only one best-of-seven series out of eight tries when they won Game 1, that coming in the 1990 division semi-finals when they beat the New Jersey Devils in six games after winning Game 1.

The Caps were never able to sustain early series advantages.  In winning Game 1 on 11 occasions against Patrick Division opponents over this period the Caps won Game 2 only four times and only once in eight tries in a best-of-seven series (1992 versus Pittsburgh; the Caps would go on to lose the series).

It did not get better as series went on.  Game 3 was a minefield for the Caps in the playoffs.  They were 6-10 in Game 3 in 14 playoff years, winning only three series of the ten in which they lost Game 3.

On the other hand, in ten series in which the Caps had the chance to eliminate their opponent they posted a 6-10 record in games.  Three times they lost three such games in a row in a series, dropping the last three games of their 1985 series against the New York Islanders (a best-of-five series), their 1987 series against the Islanders, and their 1992 series against the Pittsburgh Penguins.  When the Caps blew up, they blew up big.

Game 7 deserves its own mention.  Four times in 14 seasons in the Patrick Division the Capitals played in a Game 7 in the post-season.  Three of them came in consecutive series over the 1987 and 1988 playoffs, two of them in overtime, all of them one-goal decisions.  The fourth featured an empty-net goal for what would end as a two-goal defeat for the Caps.  Those contests put into clear focus one of the great shortcomings of the Caps in this period – one-goal games.  There were 35 one-goal decisions involving the Caps in Patrick Division playoff series, and the Caps finished with a 15-20 record in those games.  Five of those one-goal losses came in games in which the Caps were eliminated.

Taken together, 14 years in the Patrick Division was a period of growth for the Capitals franchise, a period in which it was quite literally saved from extinction.  However, only once in 14 seasons in the division did the Caps win a regular-season division title, that coming in 1989.  Six times in 14 seasons the Caps finished third or lower in the division.  Only once did the club advance beyond the divisional rounds of the playoffs, that being in 1990 when they beat the New Jersey Devils and New York Rangers to reach the conference finals, where they lost to the Boston Bruins.

The 14 years in which the Caps battled in the Patrick Division was a period of “haves” and “have nots.”  Of the six teams that played in the division over the majority of these seasons, Patrick Division teams reached the Stanley Cup finals nine times.  But three teams – the New York Islanders (five), the Pittsburgh Penguins (two), and the Philadelphia Flyers (two) account for all of the appearances.  Six times in those 14 seasons – the Islanders four times and the Penguins twice – the Patrick Division would become home to the Stanley Cup champion.

The Rangers and Devils would cast their Patrick Division frustration aside shortly after the league abolished named divisions.  The Rangers won the Stanley Cup in 1994, and the Devils would win three Stanley Cups over the 1994-2003 period along with a loss in the finals in 2001.

The Caps, however, would continue to know little but frustration.  They would reach a Stanley Cup final in 1998, but it would be the only time they would escape the second round since they took the Patrick Division banner into the conference finals in 1990. It is a record of frustration that continues to this day.

Caps fans probably remember the Patrick Division days as being better than they were, at least in terms of on-ice performance.  It was a competitive division of teams that asked for and gave no quarter.  It was rough and hard-fought, often over the line of the rulebook.  The Caps often won more than they lost, their 221-195-35 regular season record in the division and 11 straight playoff appearances to close their divisional history being evidence of that.  But the hope that success sparked in the hearts of Caps fans was almost always extinguished in the post season, often in cruel and unexpected ways.  In a way, the profile of their Capital Centre home during those years was a visual representation of the deflated dreams of Caps fans.

The Caps now join their old Patrick Division rivals in the new Metropolitan Division with a chance to write a new history.  Years from now fans will have memories of individual battles, team rivalries, and memorable games won and lost.  Here’s hoping that there are more happy endings to seasons than what fans of the Caps during the Patrick Division years witnessed.

Posted by The Peerless at 11:38 AM No comments: