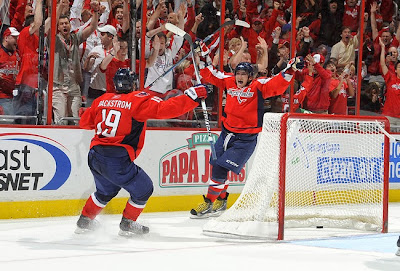 Last night the Washington Capitals lost to the Ottawa Senators, 3-1.  It was entirely predictable.  Why?  Neither Alex Ovechkin nor Nicklas Backstrom recorded a point.

One would expect that when Ovechkin and/or Backstrom score, the Caps would be successful.  Those two are, by most accounts, the club's best players and two of the elite players in the NHL.

What is confounding is just how much the Caps depend on those two to score.  Let's cut through the fancystats and get to the happy ending -- wins and losses.  Through 40 games this season, Backstrom and Ovechkin have each recorded points in 17 games.  When both score, the Caps are 14-3-0.  More impressive, they are 13-1-0 in the last 14 games in which both recorded a point.

Ah, but hold one or both off the score sheet?  Things change, but perhaps not quite in ways you might think.  When Ovechkin is held without a point, but Backstrom is not, the Caps are 3-1-1 (including two games missed by Ovechkin to injury at the start of November, during which Backstrom was a combined 2-2-4).

On the other hand, when it is Backstrom held without a point while Ovechkin inks the score sheet, the Caps are only 1-4-3.  When both are blanked, Washington is 2-7-1.  Overall, when teams shut out one or both of Ovechkin and Backstrom, the Caps are 6-12-5.

Again, you would expect the Caps to be more successful when Ovechkin and Backstrom are scoring than when they are not.  The flip side of that, however, is that this club is going to be successful so far as those two can carry the team.  They are just not getting enough help from enough places to fill in on those nights when either or both are held off the score sheet.  And so far, like it or not, those nights do happen more than half of the time.