And the Streak is Broken

The streak of prospect goalie scoring came to an end after two consecutive games in which Caps goaltending prospects notched a point. Michal Neuvirth could not keep the streak alive on Sunday for the South Carolina Stingrays.
He might have been the only Stingray without a point as South Carolina stomped the Mississippi Sea Wolves, 10-0, in North Charleston. Actually, 12 of the 16 skaters registered points, seven of them having multiple point nights. Maxime Lecroix and Travis Morin led the Stingrays with a 2-3-5, +4, and a 2-2-4, +4, night, respectively.
Neuvirth did get the shutout, though, turning aside all 36 shots he faced.
The Stingrays are now tied with the Florida Everblades for first (21 points) in the South Division of the American Conference.
Posted by The Peerless at 3:55 PM No comments: 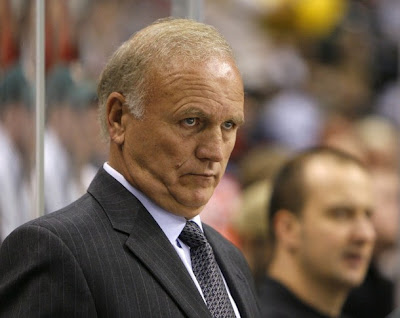 We were perusing some of the Wild blogs and stopped at "Russo's Rants," a blog authored by Star-Tribune reporter Michael Russo. His latest had some interesting "Lemaire-isms..."
"You know when you get flurry of snow, you might get a [expletive] storm!"
"We’re getting chances that we should score and we don’t score. Now there’s one thing to do, is work harder. When this happens, it’s work harder. It’s not my grandma, it’s not my girlfriend, it’s me working harder! Period! It’s nothing else.”
"Our second periods have been bad, so we have to wake up there. We’ve got to stop to think that we’re home and we’ve got to play. OK?"
"Now we want to have the nice goals. We get the puck, we want to move outside to get the puck back, to make another play. And if he gets it, the other guy moves outside to get the puck to make another play. How many times we’ll try to move outside to get the puck and make another play? If goals are tough to get, we don’t want to make fancy plays. Go at the net. If we get those plays, you don’t say a word. But now, if we get a chance to shoot, … shoot.”
Any of this sound familiar, Caps fans?
Posted by The Peerless at 12:24 AM 1 comment: