The Peerless Prognosticator is ON THE AIR!!! -- Game 34: Devils at Capitals, January 2nd

The Washington Capitals open the 2022 portion of their season when they host the New Jersey Devils in a Sunday matinee matchup (3:00 pm) at Capital One Arena.  Despite injuries and COVID-related absences, the Caps enter this contest with a 15-4-3 record over their last 22 games since November 8th, tied with the Tampa Bay Lightning over that span (the Caps have a tie-breaker edge based on regulation wins).  New Jersey is coming off consecutive wins after a prolonged slump in which they posted a 3-12-3 record from November 13th through December 19th.

To say New Jersey has been an awful road team lately might be understatement.  They started the season in respectable fashion when traveling, posting a 3-2-2 record in their first seven road games.  But since that start they are 1-6-0, a win in Buffalo over the Sabres in their last road contest breaking a six-game losing streak.  There is no mystery to New Jersey’s road woes of late.  In each of their six losses in that streak, they allowed four or more goals, 32 in all (5.33 goals allowed per game).

The goaltending during the last seven weeks has been universally poor.  Four goalies have dressed for the Devils since November 13th, when their slump started, and all four have save percentages under .900 and goals against averages north of 3.00.  Mackenzie Blackwood, the number one goalie, had a fine start to the season, going 4-1-2, 2.72, .922, with one shutout.  But since then, in ten appearances he is 3-5-1, 3.66, .874, with one shutout. Only twice in those ten appearances he had a save percentage over .900.  Even in his most recent two appearances – both wins – he was under .900.  It is part of a trend that might be cause for concern among the Devils’ faithful.  Blackwood is in his fourth season, and he has seen his save percentage drop and goals against average increase in each of the seasons, including this one.  Blackwood has been nicked up this season, missing a pair of games to a neck injury and seven others to a heel injury.  Blackwood’s record against the Caps leaves much to be desired as well.  He is 1-7-1, 3.54, .873, in nine career games against Washington.

The slump since mid-November has been brutal for defenseman Dougie Hamilton.  In 20 games since then, Hamilton leads the team in points (4-8-12), but he is also a minus-14, second-worst in the league among all skaters over that stretch of games and worst among defensemen. No player has been on ice for more goals against at even strength than Hamilton over that span (32, to 28 for Colton Parayko).  It is more than unusual that Hamilton should struggle over such a long stretch.  While he is more an offensive than defensive defenseman, and he has received Norris Trophy votes in each of the five seasons preceding this one (including a fourth-place finish last season), he is on a pace to finish the season having been on ice for more even strength goals against (92) than any of his previous nine seasons (72 with Calgary in 2017-2018).  His on ice goals against seems to have nullified, to a degree, his offensive contributions.  New Jersey is 4-1-2 when he recorded a goal, but only 7-6-2 when he recorded at least one point.  And, the Devils’ record is brutal when he bears a heavy ice time burden – 3-11-4 in 18 games in which he logged at least 21:39 in ice time.  Hamilton is 3-5-8, minus-3, in 22 career games against the Caps.

New Jersey has had their issues scoring on the road, their 2.43 goals scored per game ranking 24th in the league in scoring offense in road games. One player fighting that trend is Jesper Bratt, who leads the team in goals scored on the road (five in 13 road games), assists (eight), and points (13).  He has been on ice for 14 goals at even strength in road contests, tied for the top spot on the team with Ryan Graves, and he has the best on-ice goal differential at evens on the road (plus-3).  Bratt is the latest in a line of forwards with the Devils adept at multiple phases of the game – Travis Zajac, Scott Gomez, Jamie Langenbrunner, john Madden, and others.  His game will not shine brightly in one area, but he can contribute in different ways, and on a team that is struggling like the Devils, that attribute is valuable.  The difficulty is that with the rest of the team having its troubles, the offensive contributions are often wasted.  New Jersey is just 4-3-2 in all games in which Bratt scored a goal and 8-6-5 in 19 games in which he recorded a point.  Bratt is 3-2-5, minus-1, in 18 career games against the Caps. 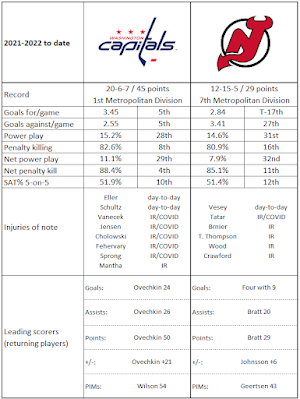 1.  New Jersey has precisely 5,000 goals scored in road games in their history.

2.  The Devils have been lit up in second periods in road games this season, allowing 25 goals (most in the league) in 14 road games.

4.  The Devils are not especially physical on the road.  Their 17.63 credited hits per 60 minutes are fourth-fewest in the league, and they have only two fighting majors in 14 road games (they have five on home ice).

5.  New Jersey has one win on the road when scoring first this season, tied for fewest wins in the league with Columbus.

3.  Alex Ovechkin leads the league in points since November 20th (24, two more than Connor McDavid) and is tied for the league lead in game-winning goals (three).

4.  Washington is stingy allowing shots on home ice, their 25.6 shots allowed per game being second-fewest in the league (Calgary: 24.5).

5.  The Caps have nine wins on home ice when scoring first, second in the league to Dallas (10).

It seemed like only yesterday when P.K. Subban was the high-energy 21-year old rookie in Montreal earning a spot on the first-team All-Rookie squad and finishing sixth in Calder Trophy voting for top rookie (Caps fans might remember that John Carlson finished one spot above him in the Calder voting in that 2010-2011 season).  Today, Subban is the oldest skater on the active Devils’ roster at age 32.  His game has changed, too, and not necessarily for the better.  In his first eight NHL seasons (six with Montreal and two with Nashville) he never had fewer than 35 points and had a per-82 game scoring line of 13-40-53, plus-6 and ended that run with a second-team All-Star berth and a third-place finish in Norris Trophy voting in 2017-2018.  In three-plus seasons since (one with Nashville, three with New Jersey), though, Subban has a per-82 game scoring line of just 9-23-32, minus-13, and topped 30 points only once (31 in 2018-2019), failing to earn any Norris Trophy votes.

Part of the problem has been absences from the lineup.  He missed 19 games in 2018-2019 to an upper body injury, and he has twice been placed in COVID protocol, once last season and once this season.  He has also seen his ice time pared back his 18:59 per game being the only season in which his average ice time was under 20 minutes.  Subban has struggled in the offensive zone of late, going 1-2-3, plus-2, in his last 13 games overall.  Odd Subban fact… he is 1-5-6 both at home and on the road so far this season.  He is 1-10-11, minus-11, in 38 career games against the Caps.

In a game against a team than might prefer to grind rather than run and gun, especially on the road, a gritty player like Garnet Hathaway takes on added importance.  Not that Hathaway is merely a minutes eater while more skilled players catch their breath on the bench.  Hathaway is 7-4-11, plus-10, in 28 games this season, a 19-11-30, plus-28 pace per 82 games.  His goal scoring pace would obliterate his personal best for a season (11 in 2018-2019 with Calgary), as would his 30 points (he has never reached the 20-point mark in any of his previous six seasons.  And, as Caps fans know, he’s an ornery cuss, too.  His 105 credited hits rank sixth among 527 skaters appearing in at least 20 games so far this season, while his 16.45 hits per 60 minutes rank seventh among that same cohort.  But even with that ornery streak, he does play within the rules more than one might expect.  While he does rank second on the team in penalty minutes taken per 60 minutes (1.41), he ranks just 54th among those 527 skaters appearing in at least 20 games.

The Devils are a bit of a mess lately, a big mess in their own zone.  Nine times in 32 games so far they have allowed five or more goals.  If there is one thing they do well, especially on the road, though, is kill penalties.  Their 89.1 percent kill rate in road games is third-best in the league.  That suggests more of a 5-on-5 battle, and the Caps have certainly proven adept at winning those battles this season.