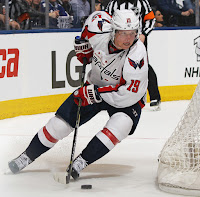 “There's a fine line between fishing and just standing on the shore like an idiot.”
-- Steven Wright

Since the 2007-2008 season, when he arrived in the NHL, no player has more power-play assists than Nicklas Backstrom (247), and it’s not close. Joe Thornton is second on that list with 211 helpers on the power play.  One could argue that his production stems from setting up the best power play goal scorer of the same period – Alex Ovechkin (175 power play goals over those years to 111 for Steven Stamkos).  However, wherever you come down on the whole “what came first, the chicken or the egg” argument, Nicklas Backstrom has been a master at getting pucks to teammates to finish over his ten NHL seasons.

Odd Backstrom Fact… Nicklas Backstrom has seven 50-assist seasons in his ten-year career. No player has more such seasons in the last ten campaigns (Ryan Getzlaf also has seven).

Nicklas Backstrom has spent a large part of his career with the label “most underrated player” hanging off of his jersey.  Pick a date, pick a list, and chances are, he would have been on it.  Back in September 2014, Backstrom made the list by not being on a list of the top 14 centers in the league.  In October 2015, there he was, atop a player poll of underrated players.  It is an adjective that has followed hiom doggedly over his career.  Whether described as an “underrated star,” or when he hits milestones, one might be forgiven if they thought they would see Backstrom’s picture under the definition of “underrated” in the dictionary.  It certainly does seem odd that a player with his statistical profile and consistency over his first nine seasons should lack in attention, but when he won a berth at the 2016 NHL all-star game, it was his first league recognition since he made the league’s all-rookie team in 2008.

Backstrom did finish ninth in the Hart Trophy voting as most valuable player in 2017 and seventh for the Selke Trophy as the league’s best defensive forward.  He received the third-highest number of votes among centers for the NHL All-Star team, behind only Connor McDavid and Sidney Crosby.  He received votes for the Lady Byng Trophy for gentlemanly play.  It has been a long time coming, but perhaps Nicklas Backstrom is finding is place as a highly, rather than underrated player in the hockey mainstream

Maybe it is tied to the fate of the club, but some of that whole “underrated” thing might be his production in the postseason.  Only three players have played in more postseason games for the Caps than Backstrom (96), and only Alex Ovechkin (90) has more points in playoff games than Backstrom (75).  His plus-13 in the postseason is tied with Michal Pivonka for best in franchise history.  Even his shooting has been efficient, his 12.0 percent ranking fifth all-time in franchise history.

Well, Backstrom has something of an odd postseason history.  He dressed for 96 of the team’s 97 playoff games of the post-2004-2005 lockout era (he was suspended for Game 4 of the 2012 Eastern Conference quarterfinals game against the Boston Bruins).  He has the overall numbers above, but breaking them down a bit is interesting.  As any Caps fan knows, getting out of the second round has been a problem for this club, and you might think that one of the obstacles has been Backstrom not quite living up to his regular season numbers.  And you would be right, to a point.  Backstrom played in all 38 second round playoff games in this era, and his scoring line does lag: 8-17-25, minus-1.  And, again to a point, he is the straw that stirs the drink…or it goes flat.  In 14 second round wins in which he played, he is 4-11-15, plus-7. But, in 24 losses he is 4-6-10, minus-8.

Then there are the matters of elimination games generally and Games 7, specifically.  In 21 elimination games in his postseason career, Backstrom is 5-11-16, plus-12.  Not bad when one considers that this is a time of year when goals and points are hard to come by.  But Games 7 have been a high wall for him to clear.  In 10 career Games 7, Backstrom is 1-2-3, plus-2, and he has not had a goal in a Game 7 since he had one in the first period of his first ultimate game against the Philadelphia Flyers in the 2008 Easter Conference quarterfinals (parenthetically, three of his five goals in elimination games came in that series, one each in Games 5, 6, and 7, after the Caps fell behind 3-1 in games).

For almost all of his time in Washington, Nicklas Backstrom has been a fixture on the top line with Alex Ovechkin and a series of right (or, for one season, left) wings.  It has been a productive use of ice time for both players, one of whom would seem already guaranteed a place in the Hockey Hall of Fame and the other putting together a worthy body of work.  This season could be different, perhaps a product of the efforts that came before it to assemble a Stanley Cup champion and the disappointment of failing to reach that goal.

When the Caps lost in the second round of last spring’s playoffs to the Pittsburgh Penguins, again, the “all-in” strategy used to assemble the roster would now have its consequences (it would have them if the Caps won a Cup, but it would have been a happier circumstance).   Of 20 skaters to appear in the postseason for the Caps, seven of them departed over the summer (Justin Williams, Marcus Johansson, Kevin Shattenkirk, Nate Schmidt, Daniel Winnik, Paul Carey, and Karl Alzner).  What it means is that youngsters will be asked to assume a larger role and/or produce more.  It could mean a lineup shake-up of sorts.  Evgeny Kuznetsov could slide between Alex Ovechkin and T.J. Oshie on what would nominally be the “first line.”  Backstrom could play the pivot between Andre Burakovsky and a collection of wingers that might include Brett Connolly, Tom Wilson, Jakub Vrana on the “second line.”  The common thread among all of those players who might skate with Backstrom is that none of the four are older than 25 (Connolly, who will not be 26 until May). At the age of 30, Backstrom is well-removed from his days as a “Young Gun” and now could be an on-ice mentor to the next generation of youngsters.

As Nicklas Backstrom embarks on the second ten years of his NHL career, he is among the franchise’s all-time leaders in just about every meaningful statistical category: games (734/9th), goals (188/8th), assists (540/1st), points (728/4th), plus-minus (plus-113/2nd), power play goals (58/7th), power play assists (247/1st), power play points (305/2nd), game-winning goals (29/T-6th), overtime goals (6/3rd).  He might be the best power play playmaker of the last two decades.  Whether or not he is to end up skating with the younger forwards the Caps will try to bring along, he stands to get significant minutes on what is still an elite power play.  It is a position he has played much as a fisherman who knows the stream well plays.  His “office” along the right wing wall has been the source of a lot of success over the past ten years.  Some players might stand there, looking like an idiot.  No one would ever make that mistake looking at Nicklas Backstrom over the years.