First it was the streak of games without a regulation loss coming to an end and now, a losing streak.  These are not the things on the checklist of things to do a team wants to check off.  Ending a losing streak.  Now that is something the Washington Capitals will want to check off when they host the Philadelphia Flyers for the first time this season in a two-game set at Capital One Arena.

The Flyers come into this contest on a two-game losing streak of their own, dropping a pair of decisions to the Boston Bruins, one in overtime this past week.  The offense for the Flyers dried up against the Bruins after averaging 3.50 goals per game over their first ten games.  They managed only four goals in two games against the B’s, four different skaters with one apiece.  Joel Farabee had one of them, extending what has been a very productive start to the season.  He started it with a bang, posting a goal and three assists in the season opening 6-3 win over the Pittsburgh Penguins.  He weathered a five-game streak without a point, but in his last six contests he is 5-0-5, plus-2, including a hat trick against the New York Islanders in a 4-3 win last Sunday.  With six goals through 12 games, Farabee is close to matching the eight goals he posted in 52 games last season in his rookie year.  On the other hand, one would not expect him to sustain his 24.0 shooting percentage recorded to date (six goals on 25 shots).  Farabee is looking for his first career point against the Caps after going without one in two games last season.

Through Friday’s games, three players in the league had played 12 games and recorded no points.  One of them is Flyer defenseman Justin Braun.  The 11-year veteran, who is in his second year in Philadelphia after spending his first nine seasons with the San Jose Sharks, is not what one would call an “offensive” defenseman, but in his previous ten seasons he did have a per-82 game scoring line of 3-18-21, plus-3.  His streak without a point, dating back to last season, now stands at 19 games, and he does not have a goal in his last 30 games.  His ice time has begun to shrink.  Braun averaged 18:53 in his first eight games, but over his last four contests that average is 16:27.  Through it all, though, Braun  has distinguished himself as a determined player.  Despite being the 201st overall pick of the 2007 Entry Draft (of 211 picks), Braun ranks 17th in his draft class in NHL games played (681).  Braun is 0-3-3, plus-1, in 16 career games against the Caps.

Goaltender Carter Hart did not dress for Friday’s game against Boston, the victim of back spasms.  While he is not expected to miss much time, back problems can be tricky, and it could mean the Caps will face Brian Elliott for one or both of the games these teams play this week.  Elliott has been quite the traveler over his 15 year career, which has been spent with five different teams (Ottawa, Colorado, St. Louis, Calgary, and Philadelphia).  The odd thing about a career as long as Elliott’s is that he has never had the kind of season in games played you would expect from a number one goaltender.  Not since 2010-2011 has he played more than 50 games (and that with two teams – Ottawa and Colorado).  But he has never really been a “back-up” goalie, either, being more of a “split time” sort of netminder.  He is also quietly moving up the rankings of Flyer goaltenders in games played.  Among the 60 goaltenders to play for the Flyers in team history, he is one of 17 goalies to dress for more than 100 games (105), and if he plays in both games this week he will tie Ken Wregget for 16th place in games played in Flyers history.  He also ranks 15th in franchise history in wins (53).  He has been generally solid this season, winning three of his last four decisions and stopping 21 of 23 shots in a loss to Boston on Friday.  Elliott is 10-7-0, 3.09, .895 in 19 career games against the Capitals. 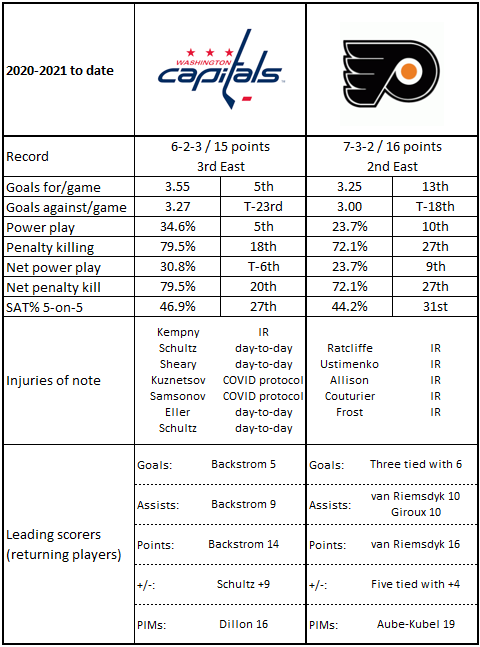 5.  The Flyers do not do a good job of drawing penalties.  Their 3.36 penalties drawn per 60 minutes rank 26th in the league.

1.  The Caps and Flyers have identical goals scored (39) and goals allowed (36) so far this season.

3.  Four of the Caps’ six wins have been by one goal; they are tied for fifth in the league in one-goal wins.

4.  Teams do not blow out the Capitals.  They are one of only six teams without a loss by three or more goals this season.

5.  Only Chicago has more losses in extra time (four) than the Caps (three).

This week will be a uniting of brothers on the ice.  Trevor van Riemsdyk, a defenseman for the Caps, and forward James, who is in his second tour with the Flyers.  When James was signed as a free agent by the Flyers in July 2018 to a five-year/$35 million contract, the hope was that he would pick up on the goal scoring he displayed in his last two seasons in Toronto (65 goals in 163 games, including a career-high 36 goals in 2017-2018).  It would be a stretch to call his first two seasons back in Philadelphia a “disappointment,” but he did see his goal scoring drop a bit (46 goals in 132 games).

Much of that had to do with shooting frequency.  In those last two years in Toronto he averaged 2.98 shots per game, while in his two seasons in Philadelphia that average was 2.41 shots per game.  It does not look like a lot in raw numbers, but it is almost a 20 percent drop.  This season, though, he is off to a hot start with six goals in 12 games, the best goal scoring frequency of his career (0.50 per game).  One wonders if he can sustain that at 2.33 shots per game pace, not to mention a 21.4 shooting percentage.  Van Riemsdyk goes into this game with a six-game points streak (3-8-11, plus-4), but the odd thing about that streak might be that he recorded no shots in three of those games, a total of 15 in the other three.  In 34 career games against Washington, he is 9-11-20, minus-9.

Finishers are expected to finish.  Finishers are also, at times, a streaky bunch.  Jakub Vrana has done not of the former lately because he is mired in a bad streak.  He has no goals in his last six games on only nine shots on goal.  Frankly, his goal scoring has been off for some time dating back to last season.  Since he had a three-game goal scoring streak in Games 48-50 last season, he has five goals in 30 games (a 14-goal pace over 82 games).

He seems to be skating in some bad luck. Of the 13 Caps forwards to have dressed for at least five games, Vrana ranks second in personal shot attempts-for percentage at 5-on-5 at 51.7 percent (Richard Panik is at 54.8 percent).  If sustained over a full season, it would be the best mark of four full seasons in the NHL (he as at 54.3 percent in 21 games in his first season, in 2016-2017).  But speaking of shooting, his shot frequency is down significantly from 2.71 shots per game last season to 1.91 so far this season.  With injuries and absences, Vrana has had his power play ice time expanded, the 2:24 in power play ice time per game being the most of his career to date.  What he has not done with that increased ice time is score goals, he has none, but he does have two power play assists.  In 13 career games against the Flyers, Vrana is 5-4-9, plus-1.

These are two teams similar in early season performance.  They have been circling one another for 11 games in advance of this series.  What the Caps are out to do is reverse recent Flyer dominance.  The Flyers carry a three-game winning streak against the Caps into this game, two of them in Washington.  The three straight losses in regulation to the Flyers represents the longest such losing streak for the Caps against Philadelphia since they lost three in a row ending in February 2004.  Through Friday’s games, the Caps still have a healthy four-point lead over the Pittsburgh Penguins and a five-point lead on the fifth-place New Jersey Devils.  But in an all-intradivision schedule format, what seemed like a healthy lead can evaporate quickly.  Remember that last Saturday, the Caps were leading the East Division and now find themselves in third place.  Two wins would allow the Caps to jump over the Flyers into second and at least put additional pressure on the first place Boston Bruins.  And, it would be the right kind of streak on which to be.