The Peerless Prognosticator is ON THE AIR!!! -- Game 32: Capitals at Devils, December 20th

The Washington Capitals end their three-game road trip on Saturday night with their second visit to Newark, New Jersey, in the last two weeks.  They will meet the New Jersey Devils for the fourth of their five meetings this season.  The Caps lead the season series with a 2-1-0 record and might have at least another standings point out of the series but for this gaffe late in a 1-0 loss to the Devils…

Otherwise, the tale of the tape between the clubs this season looks like this: 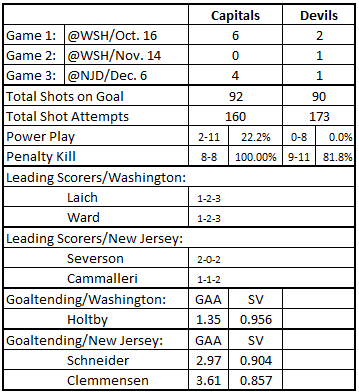 Since these teams last met, on December 6th, the Devils have been struggling with a 2-3-2 record that included five straight losses before beating Tampa Bay in a Gimmick last night.  Goal scoring has dried up.  The Devils have a total of only 12 goals in those seven games.

Chances are you would not have thought it would happen, but Scott Gomez leads the Devils in scoring in the seven games since the Devils last faced the Caps (2-5-7) and with Adam Henrique are the only Devils with more than one goal.  It is quite a change for Gomez, who went three games without a point after signing as a free agent with New Jersey on December 1st.

Jaromir Jagr is next in line in scoring over the last seven games (1-5-6), but the goal he scored in the Devils’ 2-1 win over Carolina on December 8th is his only goal over his last ten games.  He is also a minus-10 over those ten games.  One thing that stands out in his recent play is ice time.  He skated more than 20 minutes in three straight game before last night’s contest, his longest streak of 20-plus minute games this season, and he has had more than 20 minutes in five of his last seven games.

Marek Zidlicky leads the Devils’ defense in scoring over the last seven games (1-2-3).  The goal he scored in New Jersey’s 3-2 Gimmick loss to the New York Islanders on Monday was his first in 19 games, since he lit the lamp on November 6th against the St. Louis Blues.

Cory Schneider started the season with 20 consecutive starts in goal for the Devils, a club record.  His record was a respectable 9-8-2 (one no-decision), 2.58, .914, with two shutouts.  He gave way to Scott Clemmensen in Game 21 to break the streak.  Since his streak ended, Schneider has appeared in ten games with a 2-7-1, 2.50, .920 record.  It isn’t significantly different, except for the fact that he has received almost no goal support, as his win-loss record indicates.  What has changed, though, is the undercard at the position.  Keith Kincaid has appeared in six games as Schneider’s backup, and his numbers in a small population of games is impressive, even if his win-loss record is not: 1-1-2, 1.71, .942 in 240 minutes of play (he recorded his first NHL win last night). 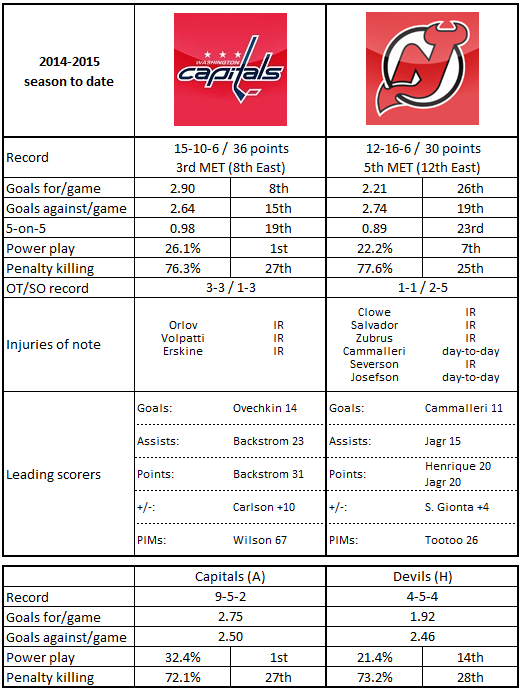 1.  Odd stat…going into Fridays’ game with Tampa Bay, the Devils scored 24 goals in each of the three periods of games this season.  On the other side, there might be some concern in New Jersey over the fact that only four teams have allowed more goals combined in the second and third periods of games than the Devils (69) .

3.  Maybe the problem is the Devils are such a bad front-running team.  Through Thursday’s games they took a lead into the first intermission only eight times in 33 games and had the league’s third-worst winning percentage in when leading after 20 minutes (.375/3-0-5).

4. How can the Devils have the seventh highest number of minor penalties taken, yet have the eighth lowest average penalty minutes per game?  They have taken only five major penalties this season.  Only Detroit has taken fewer.

5.  New Jersey is tied with Edmonton for the worst shorthanded goal differential this season (minus-3).  The Devils have allowed four shorthanded goals while scoring only one themselves.

On December 2nd, Patrik Elias suffered a groin injury against the Pittsburgh Penguins.  In the six games he missed to the injury, the Devils went 2-3-1.  He returned to the lineup last Wednesday in a 2-0 loss to Ottawa, but he recorded a goal in the Devils’ 3-2 Gimmick win over Tampa Bay last night.  It was a good sign in what has been a tough year for the 19-year veteran.  He is on a pace to finish the season with 36 points, which would be his lowest total for a full season of his career.  He has never been a big minutes-eater, the Devils’ system has never required that sort of thing.  But his ice time (17:45 a game) is a few ticks down from what his average has been over the last 16 years (18:19/game).  On a team that struggles to score generally, his contributions are going to be important.  In 62 career games against Washington, Elias is 22-35-57, minus-3.

John Carlson might have dodged a bullet in escaping supplementary discipline for his hit on Columbus’ Ryan Johansen in Thursday night’s 5-4 overtime win.  It was a mere blip on his recent play.  Even with going without a point in his last two games, Carlson is 2-8-10, plus-12, in his last ten games, and he has logged 21 or more minutes in nine of those ten games.  Carlson is tied for seventh in scoring among defensemen, tied for 17th in plus-minus, and 12th in shots on goal.  His scoring has not been especially noteworthy in road games, but he is a plus-9 overall, the second best mark in the league (Robyn Regehr: plus-10).  Carlson is 2-7-9, plus-6, in 18 career games against New Jersey.

In the Caps’ 5-0-2 run, they have climbed from fourth in the Metropolitan Division and 11th in the Eastern Conference to third in the division and eighth in the conference.  If anything, it shows how even with a solid run of play – all of it coming against conference opponents – it is tough to climb the standings.  That is the price of a league with three-point games being available.  This is another opportunity to put two more points between themselves and a division rival and to win the season series (the teams’ last contest of the regular season will be played on March 26th).  With the Devils having gone the full 65 minutes and through a Gimmick last night, why stop now?

Posted by The Peerless at 8:12 AM No comments: